How safe is America’s food supply? 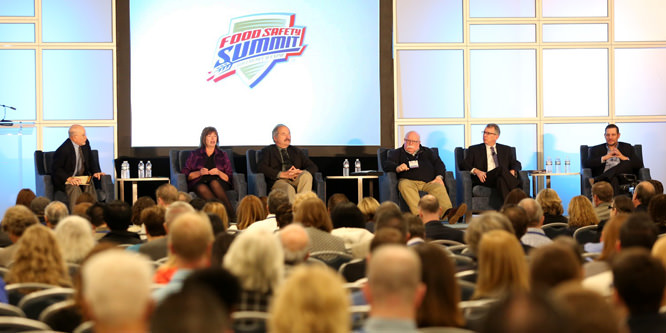 The 2017 Food Safety Summit, held last week in Chicago, featured several panels and keynote presentations that focused on how food safety professionals are coping with the Food Safety Modernization Act (FSMA) and the increased likelihood companies and their leaders will be subject to more intensive scrutiny. Even with the new administration pulling back many Obama-era regulations, there is widespread belief in this part of the food industry that enforcement is coming and all trading partners need to be prepared.

The FSMA requires retailers and suppliers to have the documentation for regulatory compliance readily accessible for government inspection, with specific records mandatory for retailers that have a central kitchen or commissary, transport food or are deemed to be the procurer of foreign products. Failure to maintain this data in an easily retrievable format can result not only in fines for the company, but criminal prosecution for the company’s executives.

Shawn Stevens, a noted food industry lawyer, told attendees at the event’s keynote session that it’s important for all retailers, wholesalers, suppliers and affiliates to understand the Food and Drug Administration was commanded by Congress to stop foodborne illness and the impact it has on Americans. His advice is for food pros to learn all aspects of the FSMA and comply quickly, saying the goal now is to avoid making the operational mistakes that may result in criminal exposure.

Jeffrey Steger, assistant director of the Consumer Division at the U.S. Department of Justice (DOJ), added that companies shouldn’t expect a waning of the federal government’s support of enforcement actions. The DOJ gets involved in cases where there is significant harm to consumers, where food company executives had prior knowledge, and where legal action will protect the integrity of the regulatory system and prevent future harm. The DOJ has pursued many high-profile food industry prosecutions and Mr. Steger believes this trend will continue.

DISCUSSION QUESTIONS: Do you expect that food safety regulation will get more rigorous or less so in the next few years? Do you think the food supply in the U.S. is safer now than it was one year ago? How likely is it be safer two years from now?

Please practice The RetailWire Golden Rule when submitting your comments.
Braintrust
"Shoppers will vote and pass judgment with their wallets -- regardless of regulations. Just ask Chipotle."

"I hope Ron is right, but this White House and both chambers of Congress are committed to rolling back regulations of every kind..."

"The U.S. is making strides in food safety improvement, however this is not a U.S.-only challenge. We get food from around the world..."

8 Comments on "How safe is America’s food supply?"

You can’t solve a problem with another problem. And that is what the agricultural sector has been trying to do for some time. The Netherlands ranked first while the U.S. placed 21st in the “Ranking of World Food Systems” and is among the top abusers of unsustainable water in agriculture. Centers for Disease Control and Prevention reports that there are traces of 29 different pesticides in the average American’s body. Popular magazines like Forbes warn us about eating fungicide-laden strawberries.

Regulations won’t do it because the damage is mostly invisible until it’s too late. Heck, look at how we’ve handled tobacco that causes 480,000 deaths per year in the United States alone, including more than 41,000 from second-hand smoke. One-thousand three-hundred deaths every day. What did the government do in response? Make money from it.

My point is that if that kind of carnage doesn’t change anything, don’t expect the fact that we live in a chemical soup to make a difference either. There is just too much money to be made. Maddening, really.

Given what we’ve seen from this new administration, I can only conclude that we’ll see food regulation become less rigorous. If this administration doesn’t care about climate change, our national parks and wildlife and healthcare then it’s safe to assume food safety is a very low consideration. That said, our justice system and the litigious culture we live in will put teeth in the FSMA. Shoppers will vote and pass judgment with their wallets — regardless of regulations. Just ask Chipotle.

Despite the wise admonitions, I am not convinced that food companies will do much to change their practices nor that enforcement will become significantly more stringent.

This government in particular is readily influenced by the desires of large corporations and large corporations’ interests run counter to preventive measures that cost up-front money. Generally speaking, they seem to be willing to risk exposure in the long-run to satisfy cost management in the short-run. So often we hear about damage control plans after a problem has publicly surfaced. Can anyone say Chipotle?

I hope Ron is right, but this White House and both chambers of Congress are committed to rolling back regulations of every kind (including allowing average Americans to purchase silencers for their guns.) It’s hard to imagine that, after voting to allow insurance companies to super-charge women who have the nerve to get pregnant, they’re going to want to protect their food supply.

The U.S. is making strides in food safety improvement, however this is not a U.S.-only challenge. We get food from around the world, so this is a massive undertaking to say the least. If you ask me this week how we’re doing on food safety I’d say pretty bad, since my wife had a bout with food poisoning last week. That non-scientific sampling notwithstanding, I’d also say we have a very long way to go. There are still way too many risks everywhere in the supply networks all the way to the point of purchase and at-home preparation. This will not be fixed overnight. Creating awareness in the consumers’ eyes is a good first step.

Safe. Very safe. Perfect? No … and of course it can never be. I think the biggest threat to food safety is misinformation and rumor — hello social media! — that both undermine legitimate improvements and divert resources into blind alleys. Further progress requires a science-respecting leadership with clear goals and the ability to overcome irrational public opinion (if necessary). I don’t see that in the near term future.

Adrian’s point about the consumer shopping with their wallets is very true. Any sort of food scandal can bring a food industry giant to its knees. Chipotle is a prime example of that. In an ideal world, stricter regulations on food safety would be best for everyone. Nobody likes food poisoning, but it’s unlikely for any big changes to happen anytime soon.

Like so many issues we have today, this starts with raising consumer awareness. The fact is most of us don’t really know in any significant detail much at all about how food is processed and shipped around the world. Are we safer today than a year ago? If you’re measuring stick is based on how long we go without another Chipotle incident, then maybe we are, but that’s a weak way to measure anything. Lack of failure doesn’t always imply great success!

As far as regulation, there’s nothing we’ve seen from the current administration that tells us we should expect anything but less regulation, and less enforcement. There’s just too much big money involved and being protected to worry about “regular people.” Just look at how climate change, the environment in general, healthcare, and privacy concerns are being treated (or mistreated in this case) for an example of what we can expect for food safety.

Braintrust
"Shoppers will vote and pass judgment with their wallets -- regardless of regulations. Just ask Chipotle."

"I hope Ron is right, but this White House and both chambers of Congress are committed to rolling back regulations of every kind..."

"The U.S. is making strides in food safety improvement, however this is not a U.S.-only challenge. We get food from around the world..."