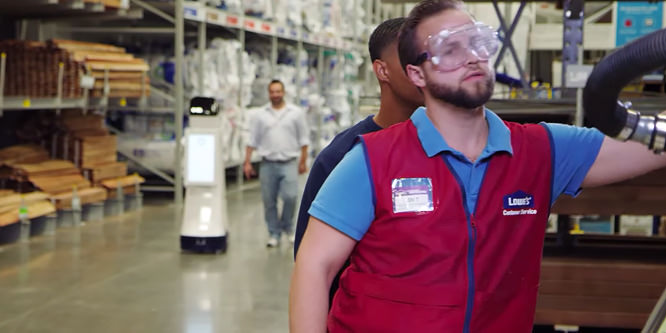 According to a new report from PwC, 44 percent of workers in the U.K. in the wholesale and retail trade are susceptible to losing their jobs to automation from robotics and artificial intelligence (AI) by the early 2030s.

A Deloitte study from 2015 found retail cashiers faced a 97 percent probability of losing their jobs to automation, while shopkeepers and proprietors (wholesale and retail) faced only a 16 percent probability. Deloitte said technology is replacing “dangerous, unpleasant, boring and unrewarding tasks” with “higher-skilled, non-routine jobs that require dexterity, creativity, digital know-how and other ‘softer’ people skills.”

While the risks of job loss to robots is often predicted, automation boosts productivity and should create additional jobs in less automatable parts of the economy as extra wealth is spent or invested, states PwC. The consultancy also noted that the UK employment rate is at its highest level now since comparable records began in 1971, despite many advances already in digital and other labor-saving technologies.

Another risk with automation is that income inequality may widen with wealth shifting toward those with the knowledge and skills that support a more digital economy. Said Jon Andrews, head of technology and investments at PwC, “Creative and critical thinking will be highly valued, as will emotional intelligence.”

The impact of automation on jobs may be slowed by the technology’s effectiveness, cost, legal and regulatory hurdles, organizational inertia and legacy systems. However, higher wages and shifts to online selling are said to be accelerating retailers’ investments in automation.

DISCUSSION QUESTIONS: How do you see automation recasting retail jobs? Which roles will disappear and what new ones will automation create?

Please practice The RetailWire Golden Rule when submitting your comments.
Braintrust
"Will people lose jobs to automation? Yes. Will automation put everyone out of work? No. "

"We are all sitting here trying to re-envision the in-store experience and people seriously think robots are a good idea?"

"Automation is already starting to change the roles of associates. It started with self-checkout in grocery stores..."

15 Comments on "How will automation transform selling floor jobs?"

Automation will have a profound impact on retail jobs, just as it will on many industries. While tasks like product location, store navigation and transaction processing are obvious areas where automation could be leveraged, I believe that the human interaction between a trained associate and shopper will remain an essential element of retailing for years to come.

I just read an interesting article that stated that out of the 250 jobs listed in the 1950 census, only one has been completely eliminated due to automation – elevator operator. Will people lose jobs to automation? Yes. Will automation put everyone out of work? No. There will be new jobs that are created that we don’t yet know exist. And someone has to build the robots and design the automation.

Sorry, but I think this is insane. We are all sitting here trying to re-envision the in-store experience and people seriously think robots are a good idea? So we’re going to get in our cars, drive off to stores, find a place to park, walk to the store and then engage with a robot? Seriously?

John Oliver did a hilarious piece on this topic and I think he was spot on. Why not just stay home and order online? There is value to human interaction. Maybe (maybe) you can put a robot in the back room, but on the selling floor? Sorry, no way.

Associates help their business develop when they can make informed inquiries and put information into context for a customer. Facilitated actions have always made for productive staff and so higher engagement through inventory visibility, providing product information and asking for the order causes transactions which build to relationships.

Retail is more than just having a way to buy a product you want. Sure, maybe for your staple goods all that is needed is a mechanism, but I honestly do not believe that gone are the days of the “great find” or the outing to your favorite retailer on a Saturday afternoon. Not if retailers can figure out how to make their brands more interesting and offer great experiences. And that, my friends, is where retail jobs are headed. We may not need someone to ring up a sale in the near future but it will take some form of interaction with some humans to deliver great experiences.

This is a popular topic around the world, not just in retail! Yes, automation will replace human jobs in the long-term, but ultimately the jobs replaced will be less skilled, mundane functions as the report states. As far as the in-store experience goes, I do not believe there will ever be a replacement for a well-trained associate that can help a customer make a tough purchase decision. As we have all stated here in this forum many times, retail brands that have associates that deliver great customer service in the store are well-rewarded with loyal customers that make larger purchases! Show me a robot that can do that!

Automation will be more of a great news and university report job generator than anything else. Yes there is a small number of very repetitive jobs that will be lost to automation — but people are still the true element of end-to-end retail. No matter the AI and robot noise we hear — the human mind is dominant over technology. Maybe not is some games, etc., but in retail it is. Robots are cute on the retail floor, but when you are looking for the right paint to redo kitchen cabinets the robot does not cut it. They can give you the information, but can’t show you the reality of using the paint or any other products for the cabinets.

Let AR firms and some vendors rant and rave — and of course tech magazines — but the reality is that people in retail are important. Retailers need to re-tune — as many are — their workforce with proper training and re-training.

History has proven time after time that automation recasts jobs. Retail will be no exception. Robotics and automation can provide tremendous value to the retail supply chain. Exactly how that will manifest itself is directly related to what the physical store will be. I believe that Amazon Go is the foundational model for the store of today and tomorrow. Having 100 percent visibility of at-shelf inventory is fundamental to the retail business model for brick-and-mortar stores. Retail IS a consignment business! This is a core fact that retailers and brands alike must acknowledge and accept — especially in an Amazon world. Implementing technology to facilitate the business model to address this reality is imperative to brands that want to merchandise and sell their products in a physical store.

Retail jobs as we know them today are going away. Just as so many office jobs have gone away. How many offices still have secretaries? We now have administrative assistants. What has happened to all the telephone operators? They have been replace by automated answering systems and voicemail.

With all of these changes, we still have the lowest unemployment rates that we have seen in this decade.

Yes the retail jobs will change, but the need for people to do jobs in retail will still be there.

I saw an interview with a major retail CEO and he stated that he sees automation taking retail jobs in a significant way by the mid 2020s. And Sec’y Mnuchin said automation won’t affect jobs for 50-100 years. So, there are beliefs on both sides of this issue. I believe retail jobs will transform more than they will disappear. Order takers at the fast food counter are already being replaced by kiosks. However, “New Collar Jobs” are emerging for those workers who are willing to learn new skills, that are replacing the traditional, relatively unskilled retail jobs.

Automation is already starting to change the roles of associates. It started with self-checkout in grocery stores and now we are seeing faster adoption of kiosks (McDonald’s) and scan and go technologies. Stop & Shop has been doing this for years and Amazon Go is the latest announcement of this new automated process. Much of the focus has been on reducing the dependence on cashiers, however, with robot technologies, companies are looking to automate warehouse processes and even associate assistance (Lowe’s robot example from yesterday). Any task that is repetitive and predictable can be automated and we will see new ways of tapping automation to reduce costs and, hopefully, improve speed of service. While automation can be a way to cut overall costs, there is a fine line in where it makes sense to deploy. Some highly personal product decisions and luxury brands will be the last, or maybe never, to adopt automation to replace humans. The real-time retail trend of identifying a customer and guiding the customer through the sale via human interaction won’t… Read more »
0
|
0
-   Share

Robotics and automation have the potential to recast retail associate job descriptions for the better! Merchandising, inventory checks, stocking, etc. are tedious, time-consuming, yet highly repeatable tasks that require no EQ. Perfect for robots! As automation evolves, associates will be free to spend more time interacting, and less time stocking!

There seems to be a disconnect between many of the comments here, seemingly predicated upon a comparison to store-based retail, and the reality that store based retail is disappearing anyway; if we’re worried about the effects of automation in retail, it’s should be in things like stocking and order-fulfillment, which, of course, are both the growth areas, and the ones where automation is most likely to occur. The convenience store clerk or the deli-counter worker are likely to be around forever, but how does that (limited) future fit in with are oft-asked question of “how do we attract the best and brightest to retail?”

The fundamentals of what computers can do and the limitations of programming demonstrate clearly why the computers of today will fall short of the expectations this discussion leaves many of the audience with. Analog computers of yesteryear could only add. The accuracy was phenomenal, but they often looped to a crash. Along came digital processors that could add and multiply. This made looping less likely and more manageable the price for this evolution was errors occurred at exponentially higher rates. Code is the bandage for this problem along with the need to write, or cut and paste, millions of lines of code for what are seemingly easy tasks. We are still married to things like 256 character recognition and IP 4. With these limitations the likeliness of leaving a computer on its own to interface with abstract rational capabilities very highly improbable. What can be expected is for people to multi task at phenomenal speed and range with the computer reporting errors and competitions. Holidecks and Lieutenant Commander Data robots are quite a ways off,… Read more »
0
|
0
-   Share

Automation continues to assist and inform, but there will always be a place for human to human contact in many types of sales. People thrive on this. Especially where gaining agreement, personal opinions and personal experiences are an integral part of the sales experience (like high-end jewelry).

Braintrust
"Will people lose jobs to automation? Yes. Will automation put everyone out of work? No. "

"We are all sitting here trying to re-envision the in-store experience and people seriously think robots are a good idea?"

"Automation is already starting to change the roles of associates. It started with self-checkout in grocery stores..."