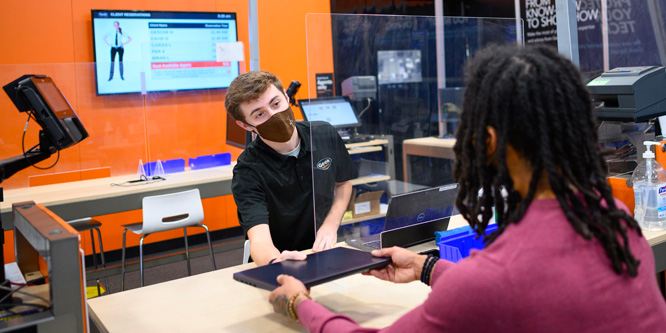 Best Buy looked like a retail chain on its way out of business in the early 2010s. Under the guidance of then-CEO Hubert Joly, however, the retailer turned its fortunes around in impressive fashion. These days Mr. Joly attributes the company’s near unprecedented return to customers’ good graces as a result of creating a new focus on the human connection.

Mr. Joly gives a rundown of five steps critical to achieving the mindset he believes brought back Best Buy in a new book, which was recapitulated in a Harvard Business Review article.

Connecting employees with what drives them, creating a genuine human connection among employees and employers, giving team members autonomy, providing employee feedback through one-on-one coaching and creating a growth mindset — all contributed, in Mr. Joly’s view, to driving Best Buy’s turnaround. He believes any company can succeed with such a strategy.

Among the practical changes this shift brought about, according to the Review article, is a training program that focuses on “soul-searching” conversations between executives and frontline employees instead of Powerpoint presentations. Sales associates are asked to act as “inspiring friends” to customers. It retells an anecdote about a child and his mother bringing in a broken Tyrannosaurus Rex toy. Staff, rather than merely pointing the customers to a replacement, creatively brought the figure back behind the counter to perform “surgery” while swapping it out.

Best Buy has managed to continue its success even through the pandemic. The retailer was one of the first major chains to implement appointment-only shopping to limit exposure to the virus. It also benefited from an increased customer need for electronic devices and gadgets as the U.S. moved to home-based work and schooling.

The chain has recently begun testing new avenues to maintain and leverage customer loyalty, such as a subscription service with perks like free shipping and unlimited Geek Squad tech support.

The public’s perception of the retailer’s commitment to employees throughout the pandemic has been largely positive, buoyed by news of paid time off for vaccination, bonus checks and other perks. Some employees in February, however, began to suggest the company was quietly cutting hours for store associates and laying off workers.

DISCUSSION QUESTIONS: Do you think the human connection Joly describes, the steps he recommends to achieve it and the ways they were implemented were as critical as he says to Best Buy’s turnaround? What can other retailers pursuing turnarounds learn from Best Buy’s experience?

Please practice The RetailWire Golden Rule when submitting your comments.
Braintrust
"Mr. Joly’s turnaround of Best Buy is nothing short of astonishing, and his comments about the human connection represent a road map for retailers seeking relevance."

"Preordered the book! The focus on front line is getting the much-needed attention it requires."

I love it! A company whose whole business is about selling and servicing our tech and digital needs is saved and thriving based on the “human connection.” No mention of data. Humans = primary. Data = support.

Joly’s just a common sense guy, driven to win, sure, but his approach of, “why don’t we just talk to them” is a win-win for employees and customers. Very unique in my opinion to get the combination of fiscal and human sense. Retail needs more Jolys, for sure.

This is a classic example of good retailing – i.e., knowing your customer so you can meet their needs. It is not easy to implement in an organization with thousands of employees, but Joly got the right team to get the right culture in place. So many other brands need to pay attention to this. It has been a while since I felt the employees of a retailer cared for me and my needs at all (with a few exceptions). That is a shame.

Mr. Joly’s turnaround of Best Buy is nothing short of astonishing, and his comments about the human connection represent a road map for retailers seeking relevance. This is the exact opposite of the robots-and-self-checkout mindset.

I believe the human connection was key in their recovery. Connecting not just from management to associates but to the customer as well has been the lynchpin of success. The Geek Squad is a perfect example of that connection as is their customer focused technology. Their early innovation in exposing their supply chain to the customer so you could understand inventory levels at store level before traveling to shop is a model for the industry and fantastic customer service. More retailers should learn by example.

Yesterday we discussed J.C. Penney and their turnaround. Compare David Simon’s comments to what Best Buy has actually done. Turnarounds are extraordinarily rare, Joly executed a magic potion of people and technology that accomplished success.

I suspect that Joly’s leadership and understanding of people would generate success in any company in any industry.

Can we clone Mr. Joly, please?

By all reasonable measures, Best Buy could/should have been among the casualties of online shopping. Yet here they are winning the game by differentiating themselves through amazing staff. Product and price are rarely differentiators anymore. The greatest variable to leverage is the quality of the staff interaction with customers.

Mr. Joly saw what so many don’t see — the opportunity to drive the business by creating an amazing work experience for their team members. Seeing employees as their most valuable asset, and not an expense item.

There are always good and bad customer experiences in EVERY retail organization no matter how lauded and iconic they may be. That’s part of the human experience. What’s also part of the human experience is the need “to love and be loved” as we learned in Psych 101. Absolutely nothing will replace human connection. Mr. Joly knew that and applied it to great effect — and profitability. This is such a fundamental reality. What bothers me is that so much of the retail sector is preferring a “touch-less” (“soul-less?”) strategy, using their artificial intelligence to find ways to avoid human connection. Pychologically and materially this is the path to unhappiness, meaningless work and perhaps demise.

Preordered the book! The focus on front line is getting the much-needed attention it requires. Tech solutions such as Headcount and Axonify are examples of technology and engagement solutions for training, education, sales motivation and more for frontline workers. Use tech solutions as a step up from the bulletin board in the break room.

Without a doubt many had felt Best Buy was going under like Circuit City and other players of its day. What Joly would say is that it was the people and not his leadership that drove the turnaround. But this is not wholly accurate. The general culture and dynamic of the company changed with Joly as he introduced new thinking into the firm. This was step one of the change and perhaps the most important. The service attitude and focus on service as a corporate strength shifted Best Buy from merely a reseller of goods to customer wingman. This culture wins all the time – but is ever more difficult to execute well. From the November 2014 earnings call: ““So number one is the customer-facing changes that we have made on our site and in our stores…”–Hubert Joly, CEO. For Joly it was always about the customer. He was playing the long term card and it paid off in spades.

Speaking from experience as a Best Buy customer, what I believe helped in their turnaround is their ability to understand and map out the shopper’s journey for consumer electronics, and then build a service model and shopping experience that fully caters to that journey.

Retailers can learn from the two sides of this transformation: empowering/respecting staff and treating customers like more than a source of revenue.

Retail suffers from huge turnover because staff are treated as expendable, replaceable commodities that are kept distant from “all-knowing” upper management. Seeing and leveraging the value of front-line brand representatives is a powerful tool to create memorable customer experiences.

Giving customers a little more than they asked for and being focused on them throughout interactions creates a connection that transcends price and utility.

Best Buy has melded these pieces well (backed by a number of other good decisions) that need to be added to other retailers’ toolkits if they want to fight to stay relevant.

As competitive as the grocery segment is, electronics is perhaps more so. Vegetables are perishable, but TVs and laptops are too. Inventory and vendor management is critical. If there ever was a segment susceptible to “showrooming” this is it. It is remarkable that Best Buy has overcome these obstacles. They have executed the personal touch to a very commodity type purchase. The thought and support behind the strategy is most commendable. All too often retailers promote their personal service but seldom allocate funds and resources to make it happen.

Yes, the human connection was as critical but it had to be paired with immediate operational fixes and brand soul searching. His efforts were deeper than the surface like ones we have been posting about this week.

Another component is listening to the frontlines. I often learn more about a client’s challenge talking to store associates during a brief store audit than I do from a thousand Powerpoint slides presented to me at HQ.

For retailers looking to turn around; do some soul searching, figure out your reason for being, listen to the frontlines, work in stores and other areas of the business. And don’t underestimate the brand purpose, I think these PE firms often do.

Connecting the brand and the shopper through an emotional bond has always been a foundational goal for any sales and marketing organization. Over the years the members of the RetailWire BrainTrust have highlighted and encouraged the need and value of human interaction between the shopper and the brand. Developing, nurturing, and maintaining brand ambassadors has never been more paramount and sought after in today’s shopping journey. The recent pandemic accelerated the fundamental changes in shopper expectations, the shopping journey, and the physical store. The word Zoom is now in everyone’s lexicon. Technology has made it possible to connect directly with a brand ambassador, regardless of where the shopper is in her journey. This immediate, on demand connection to human interaction between shopper and a knowledgable brand ambassador integrated with a seamless path to purchase is the new frontier.

Braintrust
"Mr. Joly’s turnaround of Best Buy is nothing short of astonishing, and his comments about the human connection represent a road map for retailers seeking relevance."

"Preordered the book! The focus on front line is getting the much-needed attention it requires."