IRCE recap: Is there a right way for retailers to use beacons? 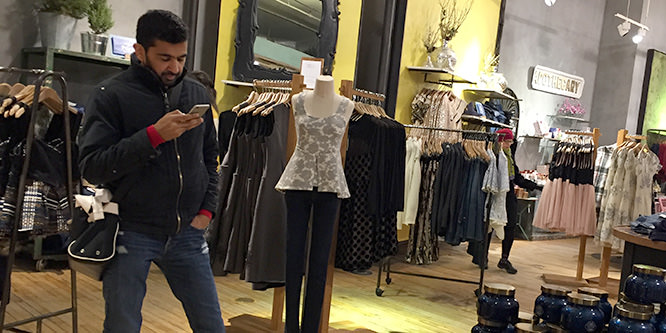 There is hope for in-store beacons yet, but the primary ways retailers have been implementing them thus far have been the wrong ones. That was the main takeaway in a session given by Adam Silverman, principal analyst at Forrester Research, accompanied by Jeff Douglas, general manager of e-commerce at Nebraska Furniture Mart, at the Internet Retailer Conference and Exhibition in Chicago last week.

In his presentation, Mr. Silverman showed that, in response to the question, “How interested would you be in allowing your smartphone to interact with beacon technology in a store environment to help offer the following contextual experiences?” special offers, loyalty rewards and rewards for checking in to the store topped the list. These results, however, may be deceptive, as they could reflect customers’ stated desires and not actual behavior.

“[These uses of beacons have] actually been in place and it hasn’t been wildly successful,” said Mr. Silverman. “Many of the examples of early adopters of beacons, focusing on offers in aisles — it’s disruptive. Customers don’t want the alerts.”

In contrast, Mr. Silverman saw real opportunities for the effective use of beacons in the responses slightly farther down the list — having beacons communicate with smartphones to facilitate asking staff for assistance; using beacons to guide customers to products in the aisle; and using beacons for unlocking dressing rooms.

“There’s an element [in these use-cases] of service,” said Mr. Silverman. “… I believe that is where the focus of engagement with beacons should be.”

Mr. Douglas shared the story of Nebraska Furniture Mart’s successful implementation of beaconing for guiding customers to products. The store locations, according to Mr. Douglas, have enough floor space to fit five to six IKEAs. The store implemented beacons that pinpoint customer location and give step-by-step walking directions via smartphone, leading customers to digitally-tagged items on the shelf. A conference attendee who identified herself as a long-time NFM shopper applauded the innovation.

Please practice The RetailWire Golden Rule when submitting your comments.
Braintrust
"Brands and retailers always do best when they avoid a knee-jerk reflex and carefully consider the consumer's needs first."

"While today’s savvy consumer does like a deal, getting pinged all over a store is not their idea of a good shopping experience..."

"There are other methods and processes that do NOT require an app that can be much less invasive and far more creative and helpful for the shopper."

10 Comments on "IRCE recap: Is there a right way for retailers to use beacons?"

Beacons have been yet another round of “the CMO knows best,” where as soon as it was learned that beacons and mobile devices could be used to force more advertising down consumers’ throats, it was done. Bad move.

Brands and retailers always do best when they avoid a knee-jerk reflex and carefully consider the consumer’s needs first. Rather than harassing shoppers with offers that marketers believe customers must want, following the use cases detailed here and other implementations of beacons that help shoppers throughout their journey, will undoubtedly make beacon deployments more successful.

A real key for the use of beacons … have them work for me, the customer! Don’t blast out ads and offers indiscriminately. Beacons are not another advertising channel until the retailer has earned the trust of the consumer.

The fundamental premise of consumer acceptance is the option to opt in and out. Once consumers have opted in, it is incredibly important for retailers to demonstrate value … especially through “personalization” and service. In short, let the customers “drive” the use scenarios, and then accurately fulfill what they want. Retailers should never ever assume that beacons will supplant the role of well-trained associates.

When beacons hit the scene, everyone jumped on the marketing bandwagon. Great way to promote to the consumer — NOT! While today’s savvy consumer does like a deal, getting pinged all over a store is not their idea of a good shopping experience … unless it is a treasure hunt-type store and the experience is supposed to be about getting dinged to find the best deal. But I digress.

The beacon should be about the customers. If they are lingering in an area for a certain amount of time, perhaps a sales associate should be sent to help them. Or, like Neiman Marcus, notify the sales associate that a preferred customer has walked in the door and greet them. Allow the customer to pre-select some items to try on and notify the dressing room those items are in when they walk into the store.

I have been using a proprietary “beacon” since 2010, for information purposes — non-shopper interaction. But then, we have tracked millions of complete shopper trips on a second-by-second basis, in many dozens of stores around the world, as a means of understanding shopper behavior. Beginning with Walmart TV, which didn’t require any response from the shopper but was still a total failure, shopper interactive technology remains the same mystery that shoppers are. The root cause of the problem is that most people have a deep and abiding belief that they “know” and understand shoppers. And why not? Everyone is, or has been a shopper. But since a LARGE part of shopper behavior is subconsciously controlled, people do not even know basic FACTS about their own behavior. For example, one of the most crucial facts of shopper behavior is that for the vast majority of stores, ONE is the single most common number of items purchased. And yet, I’ve yet to meet anyone who admits they go to the store to buy only a single item.… Read more »
0
|
0
-   Share

Beacons will continue to evolve and they will become far more integrated into our shopping experiences than they are today. One way is with this emerging technology, FYI.

While I see a benefit for the retailer in terms of a passive and highly precise traffic counter, the interaction with the shopper needs to be useful to the shopper. That part seems to be a work in process. Perhaps some of the time and energy retailers spend on “shiny objects” should go into fundamentally improving assortments, which is after all the main reason people come into stores and buy in the first place.

I’ve never been a big fan of beacons because they broadcast, for the most part, more unrequested marketing messages to shoppers. The wayfinding use cases are interesting, but while beacons are relatively inexpensive, there are several other technologies for locating mobile phones moving throughout a store that offer other benefits in cost and operations: LED lighting that pulses to find phones, special sensor embedded carpet, magnetic “beams” from the building and others. I like the use cases that aren’t about pushing marketing messages, but are instead about making the store work better for shoppers on their trips. I like the newer technologies that measure the motion of shoppers at shelf in terms of which items are picked up, viewed and put back on the shelf compared to going in the cart, and video analysis technology that shows how best to make it faster and easier for consumers to shop the store.

The use of beacon technology is another one of those technology implementations that all too often should pay attention to the adage, “just because you can, doesn’t mean you should!” They are implemented because they exist and give the retailer’s app a method to monetize the existence of both the app and the beacons.

The reality is that the use of in-store apps is extremely limited — at best! And shoppers want information and insights to support their shopping journey, not another medium and opportunity for brands to shove yet another unwelcome advertising or marketing message in front of them. These messages are typically designed and implemented to make money for the retailer, brand and their agencies — NOT to truly help the shopper on her journey.

There are other methods and processes that do NOT require an app that can be much less invasive and far more creative and helpful for the shopper.

Hallelujah Mr Silverman! That’s the first time I’ve read about beacons being used in a customer friendly (vs. retailer/sales friendly) manner. Totally agree that beacons will really hit their stride when the customer’s needs are considered first, i.e. product location, service, convenience, questions and just help in general. And not only for big box but especially for big box. Nebraska Furniture Mart has been a leader in customer service for some time (people will travel hundreds of miles to go to their stores), and it looks like that will continue.

Beyond the challenge searching for a reason beacons make sense to consumers, I confess to fundamental tech skepticism. Even today it is difficult to maintain simple TV sets playing back video in the store without consumers encountering high numbers that have failed or which need to be re-booted or where the programming (USB or otherwise delivered) is lost. That means we need to ask some questions. Can something as tricky and subtle as beaconing can be implemented on a mass scale and remain operative enough of the time to be effective? And, were beacons to “fail,” is there any risk that the failure would offend customers? The tech sale people will always say “no problem” (I know this — I used to sell tech). But it’s our responsibility to be smarter and take appropriate care. And we need to remember the difference between those who sell tech like beacons and a used car salesman … the used car salesman knows how to drive. (When I was a tech salesman, I loved this joke — because of… Read more »
0
|
0
-   Share

Braintrust
"Brands and retailers always do best when they avoid a knee-jerk reflex and carefully consider the consumer's needs first."

"While today’s savvy consumer does like a deal, getting pinged all over a store is not their idea of a good shopping experience..."

"There are other methods and processes that do NOT require an app that can be much less invasive and far more creative and helpful for the shopper."