Is a federal $15 minimum wage virtually a done deal? 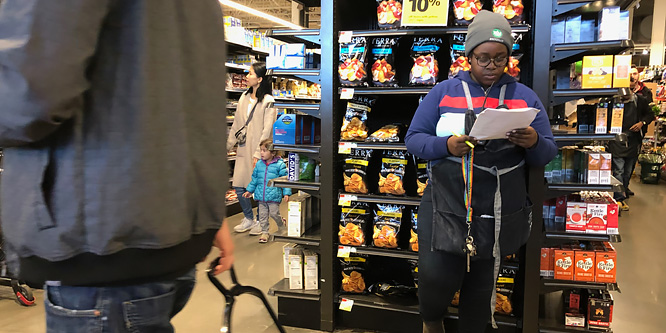 Amazon.com, Costco and Target have all raised the minimum wage they pay hourly workers to $15, and the reality is that many, most or even all retailers will be doing the same in the near future despite doing business in a labor market where millions of Americans are out of work due to the coronavirus pandemic.

While a generous labor pool typically favors employers, a new appreciation for the work done by frontline associates may bring about wage changes long championed by worker advocates. If that doesn’t do it, the upcoming Presidential election may do the trick.

The federal minimum wage has stood at $7.25 an hour since July 2009 even as the cost of living has continued to increase. Twenty-one states began the year with higher minimum wages than in 2019. Washington at $13.50 an hour has the highest minimum. Georgia, Idaho, Iowa, Kansas, Kentucky, Louisiana, New Hampshire, North Carolina, North Dakota, Oklahoma, South Carolina, Tennessee, Texas, Utah, Wisconsin and Wyoming, some with no mandated minimum, match the federal standard.

There appears to be popular support for raising the federal minimum wage to $15 an hour with proponents arguing it will help lift hundreds of thousands out of poverty. Opponents say it will cost jobs.

A Pew Research Center survey last year found that 67 percent support raising the minimum wage to $15. Democrats and independents who vote with the party were more in favor, with 86 percent supporting it. Forty-three percent of Republicans and those who lean to the conservative side also support more than doubling the current federal rate.

The public’s view of frontline workers appears to have become more favorable after seeing what low wage earners have gone through during the pandemic.  The United Food and Commercial Workers union claims that 238 of its members lost their lives in the first 100 days after the virus hit the U.S.

Recent polls showing voters turning away from President Trump and towards former VP Joe Biden could also have implications for the federal minimum wage. Mr. Biden supports the $15 minimum.

Speaking last week in Dunsmore, PA, Mr. Biden cited displays of appreciation from citizens in cities and towns across the nation coming out to clap for frontline workers during the crisis. “It’s time we not only clap for them, it’s time we pay them,” he said.

DISCUSSION QUESTIONS: Do you think a significant raise in the federal minimum wage is likely in the next year? What will it mean for retailers and those they employ?

Please practice The RetailWire Golden Rule when submitting your comments.
Braintrust
"A lot of what happens with the minimum wage depends on the outcome of the various elections in November."

"I hope so, as a living wage is a basic human requirement, but supply and demand may have something to do with this."

15 Comments on "Is a federal $15 minimum wage virtually a done deal?"

When Trump is out in a blue wave, this will be a priority. Smart retailers already realize it and are moving on.

A lot of what happens with the minimum wage depends on the outcome of the various elections in November. I don’t think an increase in and of itself will cause massive unemployment, but it may put some pressure on retailers already suffering with the costs of the pandemic and other shifts. They will need to cope with that, just as others that have voluntarily increased wages have done. All that said, I think retailers are already looking at ways to automate more of retail and reduce labor costs in response to the cocktail of cost increases from various shifts, including the distress caused by the pandemic. This is a longer term shift that the industry and economy will need to deal with.

Most retailers and several states have already begun the move towards $15 an hour already. Unfortunately I have found that most of the smaller retailers in states with mandated wage increases have raised their retail prices to compensate for the increase in wages.

It is inconceivable that the minimum wage has not been revised in 11 years.

Of all the areas in retail, I think restaurant industry lobbyists will have the most opposition to this since the argument has always been that the income includes tips.

Secondly there is some merit in the argument that it would shut out very small business who can’t pay, yet people are willing and available. Maybe any business greater than 25 employees or something similar should fall under the $15 mandate.

In the mid-’60s the equivalent of the minimum wage would give us about $12 in purchasing power today. In the meantime, productivity has increased about 150 percent. Does it seem we have to get back in balance? If it becomes an issue, many will cry that they have to layoff workers. I say, lay them off at your own peril. In business, workers contribute to the bottom line, don’t subtract from it. They will cry that they have to raise prices. If you increase the minimum wage say 20 percent, it is actually a small part of the cost of your hamburger. If one insists on raising their prices 20 percent, they are likely taking 90 percent or more of the price increase to the bottom line. From a national point of view, which Congress should be interested in, an increase in the minimum wage puts more spending money in people’s hands and they spend it. And each dollar they spend multiplies through the economy seven to nine times. Sounds like a good deal to… Read more »
3
|
-10
-   Share

I hope so, as a living wage is a basic human requirement, but supply and demand may have something to do with this. There could be a lot of weak business and a lot of unemployment which may create a “grey market” of lower paid associates.

For most categories of retail, labor is the largest controllable expense beyond the cost of goods sold (COGS). Don’t underestimate the impact of huge percentages of wage increases. Automation, reduced staffing hours/layoffs and decreased benefits are already happening, like it or not. Sorry to be a realist, however all of those small, mom-and-pop shops with 10 employees will simply not be able to afford a big wage increase — especially in more rural areas. It’s all simple math. Now let those “thumbs down” fly!

I am a proponent of a federal $15 minimum wage and I hope it happens after a shift in Congress and Senate representatives to a Democrat majority. There are a lot of people that need to support this to make it a law. I am proud to live in Washington State where we have the highest minimum wage and I applaud the growing list of retailers that voluntarily increase their chains’ minimum wage to $15.

Larger retailers and corporations know this is coming and it is just a matter of when. Small businesses, particularly in rural locations, are not even close on this and this will probably do a number of them in. For some businesses, their business model simply does not work with this wage. You cannot sell $5 Footlong Subs and make a profit with a mandated $15/hr minimum wage. Many of these other extremely low volume small businesses (think of those little kiosks in the middle of shopping malls, and various other shops) barely generate enough sales to support current mandated minimum wage let alone a $15/hr rate. Many little businesses and the relatively small number of jobs they create, will simply disappear with a $15/hr mandate. Not saying these are exactly great jobs, or great businesses, but they are still jobs and businesses. I can tell when I walk into a minimum wage business because they usually operate horribly (certain fast food franchises — can tell obviously the operators of this specific franchise who pay minimum… Read more »
5
|
-6
-   Share

The discussion questions and the headline/survey are talking about different things: it ‘s certainly possible to support a higher minimum, but not necessarily $15 specifically.
I agree with Suresh that abrupt jumps are the inevitable result of doing nothing for years, but as Gene’s numbers indicate, this seems like a bit too much of a jump:
$15 might make sense in high cost/wage states, but that should be addressed at the state level.

OTOH, to do nothing is simply to accomplish by stealth what many want anyway — a “de facto” abolition.

I have witnessed bitter resistance to raising the minimum wage in the eyes of a group of restaurateurs here in Arizona. Not pretty. I think the time has come, however.

We are learning from the pandemic just how many working families are desperately dependent on one or more low-wage service jobs to survive. When the kids are suddenly home from school and better-off citizens are staying home, those workers are bearing the brunt.

Consider the math: $15 an hour adds to $30K per year. Not a fortune, but enough for a single parent to house, feed and raise a child. Maybe own a used car too, if the worker is disciplined. How anybody could be managing on $7.25 an hour is beyond me.

Your example here — learning just how many working families are dependent on one or more low wage service jobs to survive. As we have seen with businesses during Coronavirus, the need for PPP loans, and other things, many businesses are running on a shoestring too. Again especially in rural areas. Telling them to in some cases, almost double their wage, when they are already running on a shoestring, will not work. The businesses will close and nobody will be making any money. The economics of a $15/hr minimum wage do not work in rural America.

It is not a done deal and it would cost jobs, period. Pizza shops, rural grocery stores, small town USA businesses on Main Street, farmers, and vacation areas hire a lot of young people in their first high school jobs, or retired people looking for extra spending money. What do you pay your more experienced help if this mandate gets passed? It will spiral out of control, with only mega stores surviving in the ultra competitive world of retail.

For anyone who hasn’t, spend a week actually working in these environments, and see how hard it is to turn a decent profit and still pay a $15 minimum starting wage. It is very difficult. Teenage unemployment will soar. Minimum wage is a chance to build work skills and if you can prove to your employer what a good worker you are, the raises will come your way.

A $15 minimum wage simply will not work, except again for mega businesses who would gain market share. Many smaller businesses will not survive.

Business has spoken. The minimum wage is an antiquated concept whose time has long perished. When Walmart, Target and most other businesses are already moving in this direction, it indicates the significant impact that underpaying your workers has compared to giving them a livable wage where families can flourish, not just exist, and employees become loyal.

Braintrust
"A lot of what happens with the minimum wage depends on the outcome of the various elections in November."

"I hope so, as a living wage is a basic human requirement, but supply and demand may have something to do with this."