Is altruism the secret ingredient in Starbucks’ success? 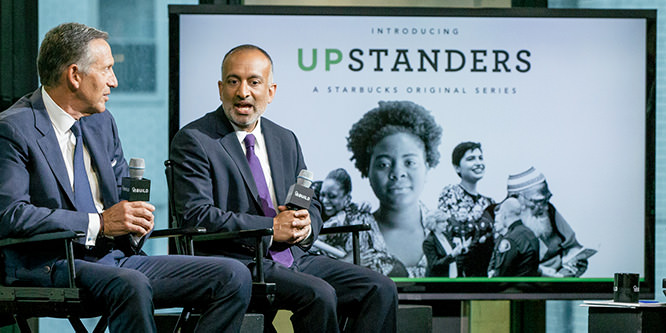 While it has sometimes stumbled, Starbucks under CEO Howard Schultz has attempted to be a force for social good. In keeping with that philosophy, the coffee giant has launched an original web series — Upstanders — with the goal of highlighting stories in which individuals and communities come together to confront societal challenges in positive, collaborative ways.

The 10-part series, which was written and produced by Mr. Schultz and Rajiv Chandrasekaran, Starbucks’ executive producer and a former senior editor at The Washington Post, is available in written, video and podcast formats.

“We’ve asked ourselves what is the role and responsibility of a public company and, as citizens, how we can catalyze hope in a time when we need more optimism, empathy, compassion and leadership,” said Mr. Schultz in a statement. “The upstanders featured in this series are inspiring individuals whose actions are emblematic of the American spirit and what is missing from so much of today’s national dialogue. We have always been storytellers at heart, and more of these stories need to be heard. We are using our scale to share them as broadly as possible.”

In an interview with Fortune, Mr. Schultz asserted that the series is not intended as a branding exercise for Starbucks.

“I don’t think there is one physical evidence of a Starbucks cup or logo in the stories,” Mr. Schultz told the magazine. “We wanted it to be authentic and the stories needed to be about the people and not about our company and marketing Starbucks.”

Mr. Schultz and company are celebrating the subjects of the series this month through a run of town hall presentations in Dallas, Deerfield, FL, Memphis and Washington, D.C. The series, which is being promoted in Starbucks locations across the country, is available at Starbucks.com/Upstanders, which is powered by a new social change platform called Fotition.

The stories in the Uplander series are titled:

DISCUSSION QUESTIONS: Do you think other retailers are essentially “storytellers at heart” in the way Starbucks is? How do you think the launch of the Upstanders series and promotional campaign will affect how consumers in the U.S. view the Starbucks brand?

Please practice The RetailWire Golden Rule when submitting your comments.
Braintrust
"Every brand should do good things because corporations have the moral obligation to give back. But it’s not a business strategy."

"Every brand needs to project a personality and this is a perfect way to do just that."

13 Comments on "Is altruism the secret ingredient in Starbucks’ success?"

That said, I don’t believe it has much value for their brand. The solid research into the brand purpose theories shows that these value-based efforts have little impact on the brand (let’s start by remembering the fact that fewer than 0.5% of Starbucks buyers will ever know of this video series). Byron Sharp has published some good analyses of efforts of this style.

Every brand should do good things because corporations have the moral obligation to give back. But it’s not a business strategy — it’s simply doing good.

Every retailer and every brand need to be storytellers. Every business needs a core story: Who you are, what you do, who you do it for and why it matters. That core story should be communicated to consumers, employees and vendors. Without that core story, why be in business?

Brands benefit from profiling their values, and the brand is elevated when stories worth hearing reflect a desire or actions in making the world a smaller and better place. The life of brands and consumers is a shared experience from the low level of transaction (fulfilled needs) to the higher level of affinity (fulfilled want) to aspiration (mutual intention). Every good ad or promotional message tells a story. Brands that tell their story, sell their story and put customers into the story serve the brand-customer relationship well. Doing so in-store supports traffic and conversion goals.

I am all for this. Though the intent is not to drive the brand, undoubtedly it will. It will put Starbucks into more everyday conversations. I applaud Starbucks for wanting to use their platform for social good, and to be a catalyst for change. Bravo!

Wow, that’s impressive. And really so spot on. I hope Schultz runs in ’20.

Having said that, it would be hard for other companies to emulate this excellent behavior considering how many retailers are struggling right now. Can you imagine Staples pushing a similar campaign? It’s not that they shouldn’t, it’s that they can’t. That’s not to take anything away from the fact that Starbucks did all the right things to get to where they are, but that mentality has been a part of their DNA all along (see also: insurance and education for all employees, etc.). Which has not been the case for most.

Given that success is a factor in breeding altruism, maybe Bezos could do a little more? Between Gates, Schultz and Mr. Amazon (all in the same city, by the way — coffee clutch?) they could put a serious dent into changing the world for the better.

Great companies reflect the values of their leader. These values are transcendent throughout the organization without being trumpeted. Schultz’s values are reflected in the employees and customers. The great leaders of great organizations are talkers; they are doers.

Storytelling captures the imagination and good storytelling connects people emotionally. Brands that are good storytellers and can deliver these stories to their shoppers in relevant and meaningful ways create strong emotional bonds with their customers. Brands spend too much time focusing on the features/function specifics of their products and services and not enough on sharing stories about how and why they touch the lives of their customers. Brands need to stand for something that matters and demonstrate real social awareness (not just PR soundbites) in making the world a better place. Shoppers will reward great stories with their wallets.

Once again, Adrian, we are totally aligned in our thinking. Many times I think formal PR strategies get in the way of stories that move people to action. Like listening to political surrogates on TV!

In this forum we often talk about the “experience economy” — how people need to feel like they’re part of something. That’s simply another way of inviting our employees and customers to be part of our story. The truth is it’s ALWAYS about the story. Store. Story. Same thing. For example, just this morning I read the story behind the “no-logo” all-wool sneakers made by a few ordinary guys in New Zealand that are “taking Silicon Valley by storm.” This is a story the ordinary person can feel a part of. You can’t feel like you’re “part of” Nike … you’re not a celebrity. The definition of “story” includes: a.) a recounting of treasured history; b.) an appealing recital of true events; c.) a description of a fictitious event meant to entertain; d.) a euphemism for a lie; or e.) a sad truth. What each retailer has to decide is, which type of story does your operation tell or want to tell? The question is, are retailers storytellers at heart? It’s the “at heart” part… Read more »
1
|
0
-   Share

This is a great move by Starbucks! Every brand needs to project a personality and this is a perfect way to do just that. They say it’s not about their brand, but it absolutely is. Every company has a story — why they started, why they do what they do and the people behind doing what they do. They should share — we need to hear it!

By definition every retailer is a storyteller. Whether the story is compelling to the consumer is the question. I don’t think altruism is the secret ingredient. The ability to give customers what they want is the secret sauce, charity is simply good corporate citizenship. There is always a small part of branding for any business to be in charity, but Apple under Steve Jobs proved you can have a successful company with very little charity in its DNA.

Retailers have not been good storytellers for a while, though there are a few exceptions. In the vein of Upstanders, consider TOMS whose entire brand and mission is a powerful story. But they are an exception. In another vein, Brooks Brothers has some terrific content on their site and that they share via email, covering everything from the history of the blazer to the work of their Golden Fleece Foundation.

Props to Mr. Schultz and Starbucks for being not just a dominant retailer but one with a conscience and a soul. That is increasingly missing in today’s brand landscape.

I love that Starbucks’s leader has strong values, and his company manifests them. It reflects not only in their social initiatives, but their employees, products … and yes, customers.

Braintrust
"Every brand should do good things because corporations have the moral obligation to give back. But it’s not a business strategy."

"Every brand needs to project a personality and this is a perfect way to do just that."