Starbucks sets goal to donate all unsold food to charity 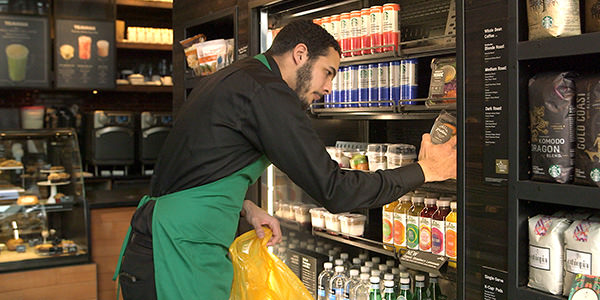 The statistics are humbling for a nation with as much wealth as the United States. Today, roughly 48 million people, including more than 15 million children, live in food insecure households in this country.

Grocery retailers and foodservice operators have been among the leaders in the business community offering hope to food banks and charities whose mission it is to care for those without enough to eat. A case in point is Starbucks, which earlier this week announced the launch of FoodShare, a program to donate ready-to-eat meals to food banks in collaboration with Food Donation Connection and Feeding America.

The coffee giant expects to provide nearly five million meals to those in need in the first year of FoodShare. From there, the company has pledged to scale up the program over the next five years, reaching for a goal of donating 100 percent of unsold food in the U.S.

“When we thought about our vast store footprint across the U.S. and the impact we could make, it put a fire under us to figure out how to donate this food instead of throwing it away,” said Jane Maly, brand manager, Starbucks Food team, in a statement. “The challenge was finding a way to preserve the food’s quality during delivery. We focused on maintaining the temperature, texture and flavor of the surplus food, so when it reached a person in need, they could safely enjoy it.”

While helping to address hunger, Starbucks FoodShare will also help reduce food waste making its way into landfills. Feeding America estimates that roughly 70 billion pounds of food winds up as waste each year.

“Our hope is by taking this first step, other companies will see the possibility for their participation and together we will make great strides in combating hunger,” said Cliff Burrows, group president, Starbucks U.S. and Americas. “FoodShare will not only make our partners proud, but once again will allow us to live our values.”

DISCUSSION QUESTIONS: What are the biggest impediments in the way of grocers and foodservice operators donating unsold food to charities? Will FoodShare benefit Starbucks when it comes to recruiting and retaining employees?

Please practice The RetailWire Golden Rule when submitting your comments.
Braintrust
"The biggest impediment to food donation is a litigious society. It seems corporations are hesitant to be on the hook for potential liabilities for mishandled or outright bad food that passes through the charitable chain."

"To me there should be no barriers to make this happen. Our small store has been doing this for over 40 years, and we have encouraged other independents to do the same in their community."

"Stop the legal nonsense and serve those in need. How difficult is that to understand?"

This is probably something only a Starbucks or giant operation can make work and it is great they are doing it. When we tried to do this with local coffee shops we continually ran into logistics problems identified in the story; keeping products at correct temperatures as well as, what would you do when people didn’t pick it up each night?

The trend to limit waste has legs and everyone can feel good about it. The devil, as they say, is in the details.

The biggest impediment to food donation is a litigious society. It seems corporations are hesitant to be on the hook for potential liabilities for mishandled or outright bad food that passes through the charitable chain. In a way it’s silly given that they already deal with potential food handling liabilities but, of course, once donated part of the handling is done to older product by unknown people in uncontrolled ways. It sure seems like some insurance carrier can step in here and solve this problem making a win for everyone. Pret a Manger has been doing this exact thing with end-of-day leftovers for a long long time.

BTW — the article implies that Starbucks wastes over 5 million meals per year. One has to wonder why such a forward thinking company has waited so long to address this issue.

Starbucks’ FoodShare program will hopefully continue to inspire other retailers to do the same. The biggest challenge will be to ensure that the truly needy receive the benefits of this service. As with many of these programs, people will scam the system and undermine both the spirit of the program and its continuation. Millennials and Generation Z value brands that stand for a meaningful cause. Starbucks may benefit from attracting socially-minded employees as brand ambassadors.

To me there should be no barriers to make this happen. Our small store has been doing this for over 40 years, and we have encouraged other independents to do the same in their community. My father was raised in the depression and constantly reminded me to never waste food. Stores need to develop a relationship with the local food kitchens and they would be happy to pick up weekly to feed the needy. The good Samaritan laws were created to allow stores to donate without hassles and more needs to be done, especially in restaurants, which throw away to much prep. The average weight given is around 200 pounds of assorted perishables and snacks, which adds up to a little over 10,000 pounds per year. We can do way better as a country and it is up to the stores themselves to start doing this. We are the most generous, and the most wasteful country, which is crazy, and those who are reading this should think about asking their local store what they do… Read more »
0
|
0
-   Share

Starbucks certainly has the infrastructure to create and support this kind of program. As Bob said, it is really only feasible for a large corporation. Starbucks should continue this act of good will and offer to work with smaller grocers and cafes to ensure even less food is wasted.

Bob and my other colleagues covered this pretty well. This is a good move and Starbucks can pull it off. Starbucks continues to give me confidence that some businesses have good values. Too often, values are left at home once the business starts.

The challenges of course are going to be food safety and the litigious culture we live in. Both are wrapped closely together.

Maybe some latitude in litigation is needed to make this kind of program within reach of more companies. I think it will make employees a little bit prouder, yes. But I’ll head to Starbies later today and spend some more money with them.

The preservation of food quality is the most apparent challenge, but the real threat to food sharing is that of legal action against food providers when someone reports sickness from consumption of the donated food.

This should be a relatively “easy” problem to address and putting some mindshare behind it will yield tremendous results for the homeless and other receipients of this food.

Creating guidelines for food care before donation is a first step. Some accountability in this area is next. Third, there should be a hold harmless given to firms that donate food in compliance with these guidelines. Stop the legal nonsense and serve those in need. How difficult is that to understand?

Starbucks is pursuing a commendable path in the FoodShare effort.

I think Starbucks blinked when it altered the loyalty program from visits to dollars, which seems now to synch with its proprietary credit card points benefit. So it’s a deal with Chase that really matters to Schultz.

Distribution of old food and diverting trash from landfills are two bits of “sustainability.” Will it offset the anger from altering the program? Not likely.

CSR is nice to do, but on its own, it won’t cover for bad decisions that alter the value equation.

The impediments of donating are the charities and the communities themselves and far fewer encumbrances for the retailer in carrying this out as a daily process of their business. As always, the Starbucks PR machine is always able to draw significant attention to itself for something that food retailers large and small, regional and national have been doing for decades. The comments that “only” Starbucks can do this or “pull this off” appear quite naive to the food retailing operations that sustain food banks and charities nationwide. In fact, I’d venture that food retailers do far more than any other to eradicate hunger, other than possibly the federal SNAP program. The FoodShare benefit is only a small icon on a screen cluster of icons that create the culture of Starbucks and its being the coveted employer in the fast beverage and fast food segment of food retailing. (With “fast” being subjective.) So, does this one single thing significantly enhance its recruiting and retention of employees? No. It is this together with all the other varieties of Starbucks… Read more »
0
|
0
-   Share

Winston Churchill that first said: “Never let a good crisis go to waste.” Today it might be restated that lawyers never let a possible lawsuit go to waste. The issue is not whether a Good Samaritan law would protect you or not. Even if protected, if a retailer or restaurant was sued because a donor alleged they got sick on donated food, the publicity surrounding the case could severely damage the perception of the retailer.

I am not saying retailers shouldn’t do this as I would encourage all to do so. However, as pointed out in the article, I would make very sure that I had documented procedures on how the food was handled and ensure that they were followed.

It’s probably efficient distribution. Many of these are local challenges, not something that can be expedited through national distribution hubs. But if people are feeling that the government is broken, then this type of local effort is always appreciated and probably makes a difference in real lives. Bravo Starbucks.

I think it’s a very smart decision by Starbucks to reduce their own waste, while combatting hunger, as opposed to simply donating money to an organization with those goals.

Recently we had a bit of a winter storm in Denver and many stores/homes lost power. A nearby Whole Foods lost power, which by regulation required the store to get rid of perishable food. By utilizing social media, the Whole Foods just gave away perishable items and generated quite a bit of positive publicity because of it.

Similarly, I think Starbucks will receive positive feedback from this initiative.

Braintrust
"The biggest impediment to food donation is a litigious society. It seems corporations are hesitant to be on the hook for potential liabilities for mishandled or outright bad food that passes through the charitable chain."

"To me there should be no barriers to make this happen. Our small store has been doing this for over 40 years, and we have encouraged other independents to do the same in their community."

"Stop the legal nonsense and serve those in need. How difficult is that to understand?"