Is Amazon taking its foot off the Prime Day marketing pedal? 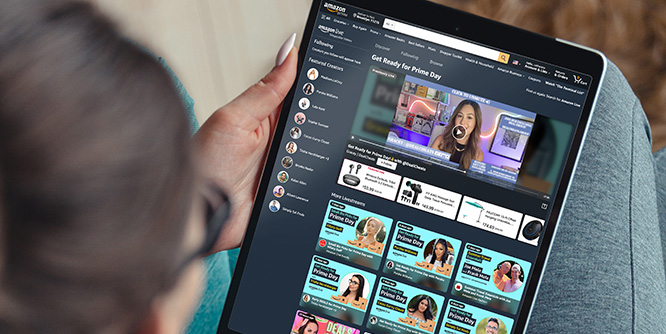 Amazon Prime Day, to take place between July 12 and 13, is expected to be less robust than pre-pandemic years due not only to inflation concerns but possibly less investment from Amazon.

Insider Intelligence predicts U.S. Prime Day sales will grow 17 percent in 2022 across Amazon and other retailers, well below the gargantuan gains seen in the pre-pandemic years since the event was launched in 2015.

A Wall Street Journal article, “Amazon’s Prime Day Isn’t Quite the Blockbuster It Once Was,” suggests that the novelty could be wearing off. Prime Day fans are recognizing that the deals are largely focused on tech, particularly Amazon’s own products.

The WSJ also says Amazon appears to be reducing investments around the event as Amazon Prime subscription growth has slowed and excess inventory isn’t as much of a challenge as competitors.

For the first time last year, Amazon did not convert its home page to “a giant Prime Day wallpaper with a small number of widgets,” according to the WSJ. This year, Amazon is skipping a free Prime Day concert that last year featured Billie Eilish and H.E.R. and is no longer featuring exclusive Prime Day product launches.

A RetailMeNot survey from late April found 88 percent of U.S. Prime members planning to shop on Prime Day, with 47 percent waiting until Prime Day to make their biggest purchases of the year. However, average Prime Day-related spend was projected to be down 35 percent from 2021, a trend that RetailMeNot attributed to inflation concerns.

An Adobe survey taken in June found 24 percent of consumers don’t plan to shop on Prime Day because they have less discretionary money to spend due to inflation. Adobe’s survey found 61 percent looking forward to summer holiday sales like Prime Day. Of those planning to participate in summer sales, 76 percent say they will spend more or the same amount as last year.

DISCUSSION QUESTIONS: Will Amazon’s marketing efforts or supply chain and inflationary pressures have the bigger impact on Prime Day performance this year? If Amazon is in fact reining in its Prime Day marketing, how do you expect its rivals to support their July sales events?

Please practice The RetailWire Golden Rule when submitting your comments.
Braintrust
"Perhaps a refreshed and broader assortment would re-energize people’s attitudes toward the event?"

18 Comments on "Is Amazon taking its foot off the Prime Day marketing pedal?"

Supply chain and inflation are impacting Prime Day, and the economy in total. Virtually every category is being impacted in some way shape or form. Is it so surprising that Amazon Prime Day is impacted also? I’m not sure why we’re so surprised. If Amazon is reining in Prime Day this year, it’s only responding to macro factors. Notwithstanding all the headwinds, Prime Day is still a meaningful event — even if it is a bit subdued this year.

Prime Day will generate sales for Amazon. However I doubt it will have the energy of previous years. The obvious reason behind this is that consumers are in a different financial position and mindset and are much more considered in their spending. The other reason is that other retailers will also cash in on Amazon’s day, so spending will be spread across more retailers – this has been a growing trend over recent years.

While inflation will certainly have an impact, Prime Day has increasingly become focused on buying Amazon products, and how many Rings and Echos does one consumer need? For this event to be truly monumental, they need other manufacturers on board, who are probably hesitant this year due to supply chain issues.

Despite “waning” growth – we can somehow call 17 percent growth waning – Prime Day is still a significantly meaningful event on the retail calendar. I do think all of the factors Tom cites will play into this year’s lower growth totals, to be sure. However I also fall into the camp of people who feel like the assortment is much ado about nothing (but Amazon’s own tech). Perhaps a refreshed and broader assortment would re-energize people’s attitudes toward the event?

So far, it does not seem like it is going to be as big of a deal as it has been in the past. Marketing has been thin – this will be interesting as more players will also be part of the mix this year.

It doesn’t really feel like they’re pulling in their marketing efforts to me, but maybe I just happen to be in the target zone for those ads, because I feel like I see them everywhere. At the end of the day, if the demand is already there for what you have to offer, why spend money generating more? In past years, Prime Day felt more like a giant sidewalk sale anyway, so I’m sure that supply chain and the recent past challenges of getting inventory will play a role in what’s available. And inflation will play a role in what consumers are willing to spend. But I definitely wouldn’t count this year’s data point as “a trend” regarding the future of the sales event. And I will be very interested in seeing how dollar volume of sales compares to the number of transactions/orders. That will say a lot about inflation and consumers’ willingness to spend.

I read that they’re going to do a second Prime Day closer to holiday so, as suggested, perhaps Prime Day is becoming just a promotional tool. Having said that, with Amazon, I feel like you’re always waiting for the next bombshell of an idea, which I would expect to be coming soon — whatever that may be. Look out below would be my best advice.

Also, we learned a long time ago that retail promotions all have a sand dial on them. They fade as sure as the consumer’s ADD will move on to the next shiny object. So I think you have to give Amazon credit for the staying power of Prime Day thus far and, as stated above, to look out for the next bombshell. They have certainly never rested on their laurels so heads up, all.

There seem to be a lot of parts in motion at Amazon. And with that, there should be a lot of internal expectations for another big Prime Day. No question there are external factors that will impact the retail industry this summer, but there’s more than a little pressure on Amazon to show that recent issues won’t derail their momentum.

In my opinion, it’s challenging to maintain hype and excitement around events that don’t have a tie to something social or cultural. This event exists only to drive more sales and, even there, sales specifically for Amazon. Even before the issues with inflation, which I think play in Amazon’s favor given their aggressive pricing, this event was in slow decline.

Overall e-commerce sales are returning to pre-pandemic levels of growth; Amazon Prime Day will likely be no different. It’s not that the thrill is gone — “it’s the economy, stupid.”

Inflation is biting in all sectors, people have significantly less disposable income and the high level of uncertainty about the future just adds to that pressure. Amazon cannot expect that they will be immune from those pressures even on Prime Day. Other retailers have also reacted to Prime Day so the novelty is not there hence less impact. Amazon are being smart not putting so much into Prime Day, it will still be a big event for them but they are aware they need to keep it fresh.

This article could have had a very different headline and tone. “Amazon backs off Prime Day marketing, and they will STILL experience 17 percent growth!”

Seventeen percent growth in this inflationary environment with every competitor on the planet jumping on the bandwagon. That sounds amazing to me. Maybe it’s profitability that Amazon wants to focus on now.

Inflationary pressures and supply chain issues have the most significant impact right now on spending. At this point, Prime Day awareness is broad and consumers are less likely to be swayed by a special concert or other expensive promotion to shop during the event. Amazon is playing it smart by backing off marketing for this event and is likely looking for their “next big thing” to drive sales and Prime memberships.

The premise seems counterintuitive. Is Prime Day supposed to be an Amazon money-grab or a savings day for consumers? If the latter, in a weakening economy, it would get scaled up so as to deliver on its promise. The fact that it is being de-scaled invites concern that either Amazon is not so forthright or that more is going on. The company can easily come up with big consumer savings if it chooses to, readily absorbing the expense of break-evens and loss leaders, yet purportedly it chooses to scale back. Things do not add up.

Even if Amazon is reining in Prime Day, they are still reigning as the trend-setter in retail. If they pull back promotions other retailers will follow, as many efforts are simply to compete.

This is more about the challenges with large numbers — 17% growth for Prime Day is still quite a large number that most retailers would love to have. To call this lackluster or unsuccessful is more about media turning against Amazon than anything else. Personally, I don’t see less marketing, in fact, I’m sure I’ve seen commercials for Prime Day on non-Amazon owned streaming platforms and apps. Perhaps I’m being targeted for those ads, but I believe the marketing push will be tied to Amazon’s supply chain and inventory situation. As the pressure is relieved there, the marketing push will adjust. However, let’s not forget that last year’s Prime Day was just as important (if not more so) for 3rd party sellers than it was for Amazon itself (notwithstanding Amazon device sales which are always an attraction and very successful on Prime Day). We also have other retailers jumping on the bandwagon, so overall I expect sales to be strong during this event. Yes, many consumers are reducing their spend levels given economic conditions, but… Read more »
4
|
0
-   Share

As we have discussed here: Prime Day has spirited competition this year from the likes of Target’s Deal Days, and promotions from Walmart and Best Buy intended to sell down excess inventory.

For Amazon, growth YoY of 17% still qualifies as an impressive statistic, even if part of the dollar increase is attributable to price inflation.

For the segment of shoppers who have discretionary funds, competing summer sales from the big retail brands are an opportunity. For many working households worried about inflation, I expect the excitement would be more muted.

This may be reflected in Amazon’s low-key promotional stance for Prime so far. Even the Jon Batiste commercial we saw over the past weekend is purely about awareness.

Does it matter? There seem to be plenty of other people willing to push Amazon.

Braintrust
"Perhaps a refreshed and broader assortment would re-energize people’s attitudes toward the event?"