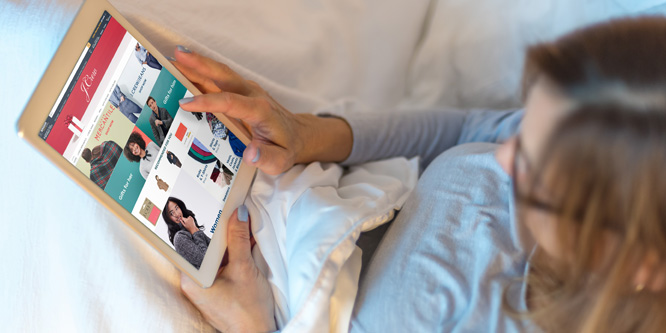 Does nothing good ever last? First, there was the news that Ariana Grande and Pete Davidson split up ;o) and now it appears as though the burgeoning relationship between Amazon.com and J.Crew may soon be over, as well.

In September, the two companies announced the creation of an online storefront on Amazon to sell a curated assortment of clothing from J.Crew’s Mercantile line for men and women. The Mercantile brand was positioned as J.Crew’s discount line, focusing on updated versions of classic styles with prices starting in the teens.

The Wall Street Journal has reported, based on a copy of an internal memo from J.Crew, that the retailer is phasing out the Mercantile brand over the spring and summer as it plans to concentrate its lower price efforts on its own outlet business. “We believe that a ‘good’ price tier opportunity is better served by the J.Crew label,” the memo reads. J.Crew currently operates 175 outlet stores, including 42 under the Mercantile banner.

The Mercantile decision along with another to end J.Crew’s recently launched Nevereven brand comes only two weeks after former CEO Jim Brett stepped down after disagreements with the board over the direction of the company.

Mr. Brett is reported to have clashed with J.Crew chairman Mickey Drexler, who objected to the deal with Amazon. The decision to abandon the Mercantile brand altogether is a bit of a surprise considering that Mr. Drexler was behind its 2015 launch. At the time, the positioning was that Mr. Drexler was looking to catch the same magic in the bottle that he found when he launched Old Navy while running the Gap business.

J.Crew reported an eight percent increase in same-store sales compared to a decline of nine percent in the same period last year. The company lost $5.7 million in the third quarter, an improvement over the $18.4 million loss in 2017.

Please practice The RetailWire Golden Rule when submitting your comments.
Braintrust
"Maybe J. Crew could learn something about how to improve its own stores and content with a presence on the data-rich platform of Amazon."

11 Comments on "Is J.Crew’s new Amazon relationship already over?"

Re-invention is hard and J.Crew is living it. The decision to abandon the Mercantile line was likely a result of poor sales more than anything else. While it’s impossible to say what impact this recent decision to phase out the Mercantile line will have, it’s clear that J. Crew is making bold moves, including leadership changes, in an attempt to find a successful path forward. Mickey Drexler is a legend and I wouldn’t bet against him.

J.Crew has been in a struggle to find itself for some time. Moreover, even though it had Jim Brett as CEO; it’s Mickey Drexler behind the scenes who keeps an iron grip on the how the company is run making it difficult for any CEO to do their job. It will be interesting to see who takes over at the helm and what they can accomplish. Concentrating on their outlets is smart, and there’s no doubt great opportunity there for most outlet businesses thrive. As for their future with Amazon, we’re most likely going to continue to see many retailers partnering with Amazon in a variety of ways, so I would expect to see J.Crew as one of those companies sometime in the future as long as ending this venture so soon hasn’t caused bad blood between both companies.

There is evidence that J.Crew had already lost its way before the hiring of Jim Brett, and the sales results this year suggest that his initiatives were working. While Mickey Drexler has a storied track record, he seems to be falling into the Les Wexner trap: “We’ve always done it this way.” Retailers (Kohl’s, for example) are benefiting from forming alliances with Amazon instead of avoiding them. Maybe J. Crew could learn something about how to improve its own stores and content with a presence on the data-rich platform of Amazon.

The discontinuation of the Mercantile line may be due to many reasons related to margin dilution and other business factors. The decision to shift to include Amazon should be part of a broader strategic plan that delivers J.Crew growth.

If something isn’t working, better to call it early than let it drag out. So many times brands beat a dead horse seemingly to save face. Two years of Mercantile in market, and just under three months on Amazon (particularly over the holiday season) is a decent amount of time to assess whether or not this will work for a retailer of J.Crew’s stature.

There is an old saying that you don’t have a dog and then bark yourself. In the case of J.Crew, you don’t hire a CEO and then tell them how to do their job. The problem with Mickey Drexler is that he can’t delegate or let go; and, in my opinion, that’s bad leadership and poor management. In a stable company, this chopping and changing would be bad enough. However, J Crew is a damaged brand that has $1.7 billion (yes, billion not million) of long-term debt. Each quarter its interest payments exceed its operating profit. There is no time for messing around with management. For what it is worth, I think Jim Brett was on the right track. He was taking the right steps to grow the core J.Crew brand and, at the same time, look for ways to drive volume via Mercantile. That strategy did not fit with the vision of other management — despite that fact that under Brett sales improved for the first time in a long time. I am not… Read more »
2
|
-1
-   Share

J.Crew might have been wiser about the Mercantile brand from the get-go, it could have been a great value brand to be sold strictly on Amazon without diluting the J.Crew cachet. Instead, we recently found Mercantile dominating the shelves at J.Crew outlets. Mixing strategies and assortments without a clear differentiation is a mistake even legends can make.

A group of four people acting as CEO is never a recipe for success, especially when your debt is so high and customer perception of your brand is waning.

+9 percent on a previous -8 percent is no cause for celebration. So after a flat trade period, J.Crew is making some (hopefully) positive changes in the merchandise area. I can’t imagine there’s much more patience left in the tank as the capital expenditures related to the Nervereven and Mercantile projects would not have been insignificant.

Hmmm. Jim is an acquaintance, all thanks to LinkedIn.

J.Crew’s 3rd quarter results were courtesy of his long-tail vision to reviving the icon brand. Mr. Drexler is an iconic garmento, but things have changed since the ’80s, Sir.

You can’t be all things, to all people. J.Crew must analyze its 3rd quarter data and figure out the 80/20 rule and double down on its core consumer.

There are studies showing that shoppers browse Amazon for products they eventually purchase in brick and mortar retail stores (and vice versa). This is especially true in apparel where sizing and fit matters. It would be advantageous for J.Crew to continue working with Amazon to gain exposure from shoppers who start their product search on Amazon. There is potential that a continued partnership with Amazon could increase in-store traffic for J.Crew. It’s also possible that their higher-end lines could perform better on Amazon than Mercantile since higher income households are more likely to have a Prime Membership.

Braintrust
"Maybe J. Crew could learn something about how to improve its own stores and content with a presence on the data-rich platform of Amazon."