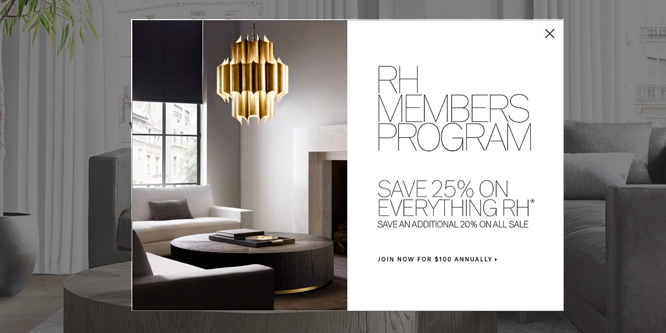 RH, formerly Restoration Hardware, has put itself back on the retail map after a few rocky years and some are attributing the comeback to a strategy of exclusivity.

RH’s stock experienced a four-month high in late March after releasing strong 4th quarter 2017 results that beat Wall Street estimates, according to Bloomberg. Even before the spike, shares had more than doubled in value over the previous year. The article pointed to the company’s membership program as the driving force behind its return from its 2015 and 2016 lows.

The program, which asks members to pay a $100 annual fee in exchange for 25 percent off all items and an additional 20 percent off of sale items, has allowed the company to carry less inventory, rely less on promotions and focus more on providing service for loyal customers. Members also receive complimentary interior design consultations, concierge service for order management, exclusive credit card financing rates and early access to clearance events.

The upturn, however, hasn’t been constant since the program’s launch. RH experienced a same-store sales drop in the third quarter of 2016. At the time, representatives stood by the program, insisting that it was RH’s way of refusing to join a promotional “race to the bottom.”

Some are suggesting another factor as the major contributor to RH’s newfound success. The addition of high-end hospitality offerings under the RH Hospitality brand, such as a café/restaurant, a wine tasting room and an espresso bar, have been big successes, as reported in MarketWatch. The Chicago RH was the seventh most Instagrammed café in the U.S. in 2017, and the recently-launched West Palm Beach location with a rooftop restaurant is trending 35 percent ahead of the Chicago location’s first year numbers.

In explaining the March stock jump, Seeking Alpha noted the addition of other top-line drivers such as new sub-brands RH Modern and RH Teen, as well as the chain’s efforts to optimize operations to maximize margins.

DISCUSSION QUESTIONS: How much is the membership factor driving RH’s rebound? What advantages do you see in the program for RH? Are there retailers in other verticals that you think would benefit from a membership strategy?

Please practice The RetailWire Golden Rule when submitting your comments.
Braintrust
"Membership is so much more powerful than a loyalty program. Just ask Costco. "

"RH is a combination of webrooming, showrooming and catalogrooming. It is a winning model."

"At the same time you can’t disregard the impact of the more experiential elements of the retail experience – this is a really good example of that..."

There’s a lot at play here in this business model, including giant catalogs, large furniture that won’t work well in smaller apartments, and a price point that’s not for everyone. Let’s hope that RH can arrive at a strategy as beautiful as the merchandise.

Membership and loyalty programs have some minor influence on RH’s rebound, however, it’s the brand’s strategic repositioning to an experience-first model which is truly driving the resurgence of the company.

Restoration Hardware has taken strides to reinvent the luxury home furnishing shopping experience. According to the CEO Gary Friedman, RH is challenging the traditional retail model by building inspiring spaces that blur the lines between residential and retail, indoors and outdoors, physical and digital.

In this digital age, physical space is required to create that depth of multi-sensory experiences where memories are made, trusted community-based relationships are built, stories are told and brands have a chance to resonate well beyond the actual product.

I may not be the “canary in the coal mine” but I can confess to the impact of RH’s membership. This past December we bought a Christmas tree online from RH (yep, a Christmas tree — nicest one I’ve ever seen!). We picked up the membership at the time of purchase to take advantage of the discount, which more than covered the membership cost (hmmm … they likely left some money on the table doing this). We’ve now ordered from them three more times, largely in part because of the membership.

Membership is so much more powerful than a loyalty program. Just ask Costco. Every retailer should consider every possibility to introduce a membership program in their store, even if just for a specific department (for example, a paint dept membership in a hardware store). You have to get very “sticky” with your customers, as loyalty just doesn’t exist any more.

We are seeing a growing list of retailers follow the Amazon pay-to-play model for customer loyalty programs. In the case of the RH program, there is a clear and direct line to perceived value for consumers: significant pricing discounts. My sense is that this is an effective strategy for people already predisposed to spend a significant share of their home furnishings wallet with RH. They have hence placed their bets on increasing the frequency and average order/lifetime value of already loyal shoppers, rather than seeking to expand their loyal client base. An interesting and — in my opinion — risky strategy that, in the short run anyway, appears to be paying dividends. Only time will tell if they can continue to drive growth from the same subset of shoppers in a market that is notorious for low frequency metrics.

Anyone buying anything from RH would be dumb not to sign up for membership because in most cases the discount more than covers the cost. This may seem odd, but the strategy is smart: it allows RH to build a database of names from which it can then create a community with which to engage.

Psychologically, members value discounts more than they would money off and are more likely to use RH as they are keen to maximize the value of their membership.

As the article notes, membership is not the only reason for RH’s performance. New ranges, better marketing and strong growth in the home furnishings market have all helped too.

While the membership program has surely had an impact, I believe this is more reflective of moving to an experiential-based retail model which incorporates ideas like cafes and wine bars in addition to a varied product mix that helps fuel that exclusive feeling. Coach and Michael Kors have used the exclusivity strategy before with success but it’s only a success as long as you can maintain the exclusivity — once everyone has the same items, they’re not exclusive anymore. At least in the case of RH the merchandise category is much harder to achieve such critical mass as the accessory merchandise you find at a Coach store! The combination of membership, exclusivity, product assortment and great experiences is what’s driving RH’s success!

Membership strategy has always had a cash capture at its core while, granted, elements of loyalty marketing apply also. Membership and loyalty are becoming the overlays to retail operations and the industry at large should be concerned that these tactics are taking away from the focus of providing shopping appeal and value to all who enter.

The membership model helps, but there may other forces at play at RH – such as product pricing, fewer promotions, maintained margins, desirable assortment – about which we are not told. So it is not easy to categorically say what helped sales. Seldom is there only one factor driving sales up in retail.

Membership is on the rise in retail and may well be the future of loyalty. The idea of offering perks in exchange for a fee, rather than just giving out a loyalty card, has become well established – not least because of Amazon’s Prime service. It stands to reason that membership can help breed loyalty as people want to get the most out of their investment. I’m really interested to see how this continues to pan out for RH. At the same time you can’t disregard the impact of the more experiential elements of the retail experience – this is a really good example of that at play. It gives customers a reason to shop there over other retailers and makes for a more positive experience.

Since RH reports that 95% of its business is driven by its RH Members Program, it appears that the program has been a big contributor to its rebound. If anyone is looking to purchase furniture or a fairly expensive item from RH, the Members Program is a no-brainer, as you only need to spend $400 to benefit from the membership. The RH Members Program is also a great way to improve customer loyalty, as once a customer is a member, they will want to continue to “save” more by spending more at RH. With Amazon’s 100 million members and the success Costco and other retailer fee-based membership programs, they have proven that membership programs are well accepted by consumers. Walgreens is another example from yesterday’s RetailWire conversation. I suspect we will continue to see many more retailers jumping on this bandwagon. While the membership program is a great strategy, RH has innovated a truly omnichannel customer experience with high-touch in-store, catalog, call center and e-commerce experiences. Their RH Gallery stores, in premium locations, are a… Read more »
1
|
0
-   Share

Hard to think of someone that doesn’t have a “membership program” of some sort now. I’m in like 9 of them. Ugh.

RH does a LOT of things right, including an amazing physical shopping experience (old Louie’s in Boston!) but boy, talk about the haves and have nots. I looked a really cool 8X10 carpet there — 6 grand. Membership reduces that significantly, but I think you get my point. 6 grand. Who’s that for? I guess if you have to ask, you can’t afford it!

If you have not been to a RH store recently, it is something you need to put on your bucket list. The look has changed, and for the better. The inclusion of a restaurant or wine tasting bar have made it more than a shopping destination. RH has added to this with the membership program. All steps taken have been positive and all add to the shopping experience and bottom line. Way to go RH!

If you look at the stock price, specifically, you’ll see that its 5-year performance matches the S&P (sort of … it’s still a little ahead) so I suspect the current performance is largely a correction to earlier overreactions (not that those ever happen).

As for the membership: companies do well when they have a consistent customer base (at a profitable level of operations, of course); so while this may serve as a tangible reminder of what that base is, I don’t think it’s the cause for better performance in itself. I think the “rightsizing” — of both the inventory and the customer levels — is.

Braintrust
"Membership is so much more powerful than a loyalty program. Just ask Costco. "

"RH is a combination of webrooming, showrooming and catalogrooming. It is a winning model."

"At the same time you can’t disregard the impact of the more experiential elements of the retail experience – this is a really good example of that..."