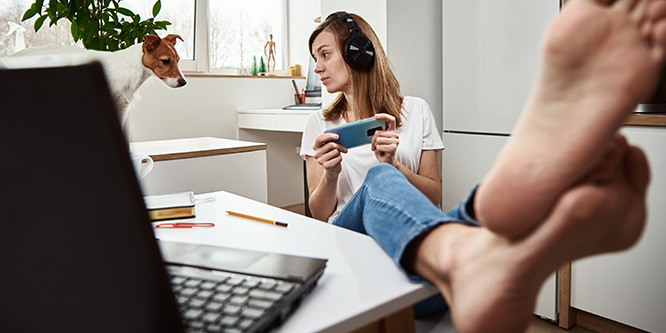 In its latest “Work Trend Index Pulse” report, Microsoft revealed that 85 percent of managers “have a hard time knowing for sure that their people are being productive” away from the office, but 87 percent of surveyed workers say they are productive. Microsoft titles this consequence “productivity paranoia,” and says the effect it has on leaders risks making hybrid work unsustainable.

For workers, burnout can come from “productivity theater” or trying to look busy while working from home.

A report, “Killing Time at Work,” from Qatalog and GitLab released in August found the average employee working an additional 67 minutes online each day to avoid suspicion from their peers that they are not working hard enough, like attending Zoom meetings they know will be “worthless” or responding to emails and messages at strategic times.

Of the 2,000 U.S. and U.K. workers surveyed for the report, 81 percent believe they are more productive and create higher quality output when they have more flexibility over when they work. The report states, “We had a golden chance to say goodbye to the rigid 9-5, but it appears we’re still stuck in old habits of presenteeism, and technology is making things worse.”

INC wrote of the phenomenon, “Many leaders are sending mixed messages, officially encouraging flexible, remote work while informally signaling that those who stick closest to the old 9-to-5 will get ahead. The result is the worst of both worlds — the work-life blur and ‘quick’ midnight email checks of remote work without the benefits of autonomy and control over your time. That’s a recipe for burnout and annoyed talent.”

According to Microsoft, leaders should strive to “create clarity and alignment around company goals, eliminate busywork and listen to their people” to resolve productivity paranoia.

Microsoft also spoke out against the increasing practice of using tracking technologies for workplace surveillance.

Jared Spataro, Microsoft’s corporate VP of modern work, wrote in a commentary for Fortune, “Measuring productivity with mouse movements is like using a sundial as a stopwatch. And surveillance doesn’t just lead to bad data — it undermines trust, a critical factor in organizational success that, once lost, is incredibly difficult to regain.”

DISCUSSION QUESTIONS: What solutions do you see for overcoming “productivity paranoia” developing out of remote and hybrid work environments? Should employers consider using workplace surveillance?

Please practice The RetailWire Golden Rule when submitting your comments.
Braintrust
"If a manager's concern is whether an employee is busy every second, they are measuring the wrong metric. Productivity is a measure of 'achieved results.'"

"When there is an opening for a bigger job, will the working-from-home folks even be considered seriously?"

"...in reality it is just highlighting poor management, if managers cannot identify if their staff are productive without having them sit in front of them."

12 Comments on "Is ‘productivity paranoia’ from remote working solvable?"

Companies need to measure outcomes and not inputs. That means setting clear goals and objectives which are measurable and then monitoring and discussing them with employees regularly. Companies being paranoid about working from home suggests that they’re not managing people properly and/or there is a lack of clarity and trust in the organization.

I completely agree. Are your people achieving the goals you’ve agreed to? Yes or no?

Every business will need to navigate this issue, and there will not be one right answer that works for all. The idea of using technology to measure/monitor individual productivity is understandable – especially in large enterprises where it’s difficult to see the contribution of individuals. However the notion of being tracked offends the basic idea of trust with your employees. It’s clear that most people like to have some control over their time, and work-from-home is a huge win for some workers. But a largely work-from-home or highly flexible work environment makes it very difficult for businesses to build culture and facilitate collaboration.

If a manager’s concern is whether an employee is busy every second, they are measuring the wrong metric. Productivity is a measure of “achieved results,” not a measure of mouse clicks or phone calls.

Being stuck in old habits is right. Some managers simply can’t adjust to having to lead people they can’t see. It’s a new world where flexibility and trust are critical.

Would I work for a company that uses technology to monitor my productivity while working from home? Not a chance.

I learned a long time ago that even in an office setting it was not how much time someone spent, it was what they accomplished.

Management and associates need to clearly state objectives and measurements as a means to understand performance levels and where/when work will be performed. Then, follow up regularly with discussions weekly, monthly, quarterly and a formal review at year-end. Using “spy” tools is extremely problematic and erodes the fabric of trust between management and associates. What does it say about a company who uses tech to monitor every stroke on an associate’s keyboard? It speaks volumes, and it’s going in the wrong direction. Senior leaders need to figure out how best to utilize talent in any kind of model (fully on-site, hybrid or fully remote). We’ve done it effectively in all modes over the last two years, so this is not a difficult problem to solve.

The new way of working creates new management challenges but in reality it is just highlighting poor management, if managers cannot identify if their staff are productive without having them sit in front of them. The measurement of productivity is not how many hours someone is tied to a desk, it is what they have produced that should be measured. This really is a management problem and not one the workers should be getting stress about.

I agree with most of the comments by my colleagues. But I have another question.

When there is an opening for a bigger job, will the working-from-home folks even be considered seriously?

One very simple question: if you can’t trust them why did you hire them?

Mel, well said — and what does it say about senior leadership who think they have to spy on employees? Maybe the problem is at the top of the company, not in the middle or entry level.

Depending on the role and responsibility, remote workers’ productivity can be measured. The easiest way is to stop thinking of traditional measurements and focus on the accomplishments. If the remote worker has to accomplish X (whatever that is), then don’t worry about if they work seven or eight hours or take a longer than usual lunch. Just focus on the outcome. If they get their job done, then isn’t that all that matters?

Braintrust
"If a manager's concern is whether an employee is busy every second, they are measuring the wrong metric. Productivity is a measure of 'achieved results.'"

"When there is an opening for a bigger job, will the working-from-home folks even be considered seriously?"

"...in reality it is just highlighting poor management, if managers cannot identify if their staff are productive without having them sit in front of them."