Is Starbucks passing the buck to baristas on customer service? 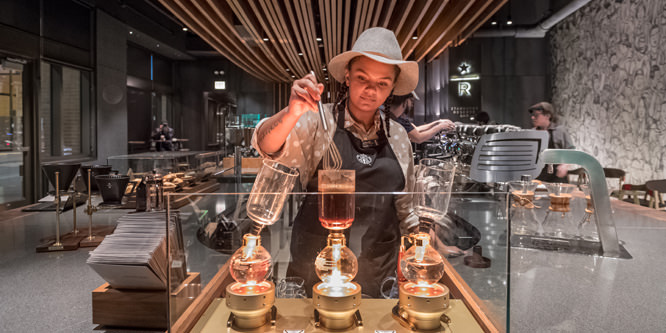 When it comes to social issues, Starbucks has positioned itself as one of the more politically progressive chains out there, but that image doesn’t always hold when it comes to the company’s labor relations. The latest controversy surrounding the coffee giant concerns a customer service retraining initiative called North Star, which has become fodder for the company’s critics.

North Star is a two-year agenda to improve customer service at Starbucks and one of the few initiatives implemented under new CEO Kevin Johnson, according to Business Insider. The initiative has consisted of mandatory meetings at each Starbucks store. Mr. Johnson and Starbucks’ head of U.S. retail, Kevin Engksov, believe that North Star is encouraging baristas to better form an “emotional connection” with customers. But some baristas who have attended the meetings have come out infuriated.

Critics claim that the meetings are about blaming baristas for customer service hiccups, while failing to address factors that set baristas up for failure, including understaffing, difficult-to-manage mobile and drive-thru ordering and drinks that are time-consuming to prepare.

Accounts of the Starbucks experience paint a contradictory picture of the level of service. A Consumer Affairs page gives Starbucks an average 1.3-star rating out five possible stars. However, a study about foodservice customer service levels on Pizza Marketplace, based on 5,500 surveys conducted between June 2016 and May 2017, placed Starbucks’ customer satisfaction rating at 77, the average for quick-serve restaurants being 79.

Some of the most visible stories about service complaints at Starbucks lately have been political (and partisan) in nature, for instance, a viral story about a barista placing an anti-Trump slogan on the receipt of a customer wearing a Trump shirt.

Not all of the news about Starbucks’ customer service has been negative. In the wake of a point-of-sale outage last month, Starbucks won approval by allowing stores to give away free beverages.

Regardless, the question of whether North Star is the way to tackle the perceived problem remains open.

While Mr. Engksov asserted that the company is listening to employee feedback and working to better support baristas, one employee quoted in Business Insider referred to North Star as “company Kool-Aid.”

DISCUSSION QUESTIONS: What is Starbucks doing right and wrong with the North Star initiative? How do you expect this controversy to shake out, and what can others looking to improve customer service learn from it?

Please practice The RetailWire Golden Rule when submitting your comments.
Braintrust
"Customer service is important but initiatives don't work until and unless the person delivering that service feels like they are being treated fairly."

"Despite some pushback from some employees, I give Starbucks credit for ensuring that every associate owns the customer experience."

12 Comments on "Is Starbucks passing the buck to baristas on customer service?"

Starbucks management is right to work on maintaining a high level of customer satisfaction. The problem may be in the translation of that desire to its staff. Management would be wise to solicit employee feedback and act on the suggestions that increase customer and barista satisfaction. Front-line employees frequently have valuable ideas on ways to improve customer satisfaction. Helping them understand the pragmatic aspects of those ideas, while actively considering them, will build morale while improving service. Neither management nor employees always know best.

I agree. There is a big disconnect between management and frontline employees. The latter deal with customers on a daily basis, yet their insights are not regularly heard. Management would be wise to conduct regular employee surveys to elicit feedback from frontline employees about operations and what challenges they believe are causing issues with customer satisfaction.

I have this discussion with clients all the time. You can’t teach customer service as a training program; it needs to be part of the employee culture starting with what the company stands for and what makes them unique and different than their competitors. Customer service is not a list of “dos” and “do nots.” Sure that’s part of it, but it’s having all employees embrace the culture starting at the top with the philosophy that there is no one or nothing more important than the customer. So often when speaking with clients, they’re quick to say “oh we have a customer service training program” which is something given one time to all new hires. That doesn’t work. Instead, customer service principles need to be integrated into all training programs and all communication. I have seen situations in which the store manager yells at the employee and embarrasses the person. Then moments later, that employee takes it out on a customer. So culture is the key and not a customer service training program. Furthermore, a… Read more »
3
|
0
-   Share

You hit it on the head, Art. This is all about culture. We saw this several years ago when Starbucks lost its identity and culture by growing too quickly. And we are seeing it again as Kevin Johnson takes the reins. The common theme here? Howard Schultz, or the lack thereof, and the culture that trickles down from the top. Customer service needs to be the reason that employees get up each morning and show up for work in the retail and restaurant industry. Especially when customers are dishing out several dollars for something as simple as a black coffee or even more for a fancy “coffee” drink and upscale food. How can some retailers get the customer service equation so right and so consistent across thousands of locations? It is surely not due to a single customer service training program, but rather a culture that emanates from the top and is adhered to by general managers and their hourly associates. Which are the companies in retail/QSR that have gotten this customer service equation down… Read more »
1
|
0
-   Share

You and I are on the same page! I would add Apple to your list of stores with great customer service.

Without a plan for improvement there is no progress, so hats off to Starbucks for North Star (a guiding light). Some blame, let’s call it rebuke, can be expected which the developing barista should be inclined to welcome. But the onus of customer experience at Starbucks goes beyond staff performance and comportment. Customer experience (CX) is to engage consumers on topics of shared interest. It involves discovery, learning, play and acquiring as well as storytelling and respect for people, places, organization, listening and aspirations. CX is the feeling that you get in the presence of the brand. The barista’s welcome, smile and enthusiasm are just a part of telling and selling the Starbucks story and involving their customer in it. Otherwise it is just coffee.

A solid approach to improving any process is to identify the root cause issues that are creating inefficiencies that lead to poor customer satisfaction. It seems that Starbucks could have polled the barista community as to their opinions on the root causes and then addressed these issues with solutions in hand as part of the North Star meetings. Maybe Starbucks did take this approach, but it does not seem apparent in the articles here.

It sounds like Starbucks has some systemic issues to solve (scheduling, mobile payment, etc.), but the barista is really the face of the brand. Despite some pushback from some employees, I give Starbucks credit for ensuring that every associate owns the customer experience.

Ironically, since I am not always a huge fan of the way chains approach customers, I have to say I happily trod off to my local Starbucks — on Main Street in Royal Oak, MI if anyone ever wants to drop by — every morning and I’m not even a coffee drinker. The reason? The excellent baristas. Are there problems in delivery? Sure. The bar where you add sugar, etc. is way too small and accommodates only two, highly cooperative customers at a time, which is another way of saying that most days it’s only big enough for one customer. The store’s layout is a nightmare with two bad chokepoints built into the design. And yes, some drinks — like my tea — seem to take an unnaturally long time to prepare, further slowing the line. So let’s take my tea for example. Before Starbucks purchased Teavana they used Tazo teas. Tazo tea bags came bulk packaged in one large bag so a barista just had to open that, select the appropriate number of teabags,… Read more »
7
|
0
-   Share

Customer service should always be directed to those who deal with the customers. And at the same time, those who deal with the customers should be given latitude on how to deal with them. A program of philosophy is most important. A program of “dos and don’ts” has you ending up with the problems the airlines experienced recently. I am not sure exactly what is going on underneath the customer service theory, but as a Starbucks loyalist, I stop into many stores and find most of the service at a very high level and most important, friendly and engaging. That said, there is a Starbucks three blocks north of me. Since day one several years ago, the staff has been outstanding. Even as I move around town and visit other stores, I am sometimes greeted by baristas formally from the nearby Starbucks. That even happened once on the subway. About six months ago, another Starbucks opened four blocks south of me. From day one the staff have been zombies and continue to be. Same training… Read more »
0
|
0
-   Share

You can’t force customer service. It needs to be inherent to your employees’ behavior. It needs to be natural. The only way that happens is if your employees truly believe in what they are doing — and who they are doing it for! You cannot artificially create a great customer experience. While the barista plays a critical and “Venti” role in the Starbucks experience, the brand — and what it represents and portrays to the broader consumer audience — must be woven into the overall value proposition.

Having a formal feedback loop is important for associates who interact with customers. North Star, or any other training and feedback process, is critical to drive success. What’s missing is contextual and actionable data that can identify root issues. Without this actionable insight, accountability becomes subjective and an initiative like North Star can feel like it is hard on the staff. Moving this conversation to be more data-driven will create better solutions and improve customer service AND improve associate morale. To do this requires new technology that connects every associate to the network, allowing for processes to be accurately measured and improved … without the Kool-Aid.

Braintrust
"Customer service is important but initiatives don't work until and unless the person delivering that service feels like they are being treated fairly."

"Despite some pushback from some employees, I give Starbucks credit for ensuring that every associate owns the customer experience."