Did Starbucks turn its POS outage into a win? 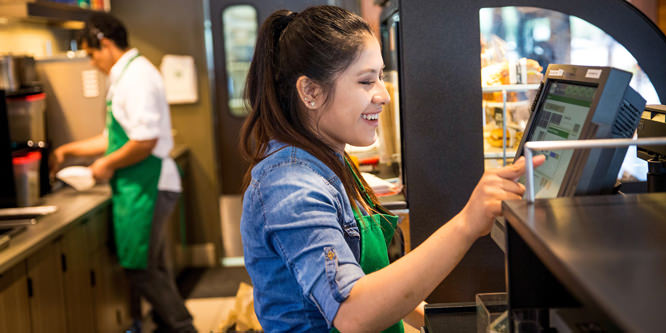 An unspecified number of Starbucks stores were unable to process payments yesterday due to problems caused by a software update to the chain’s point of sale system. The issue prevented stores from accepting cash payments as well as credit and debit cards. Stores, according to reports, handed out free coffee to customers for their trouble.

Starbucks quickly put to rest any concerns that the outage was connected to the worldwide “WannaCry” ransomware attack that primarily affected businesses, utilities and government institutions in Europe and Asia last weekend.

“Overnight we worked to install a technology update to our store registers in the U.S. and Canada, and a limited number of locations were temporarily offline,” wrote Madeleine Lowenborg-Frick, a Starbucks spokesperson, in an email to the Chicago Tribune. “The stores remained open during this time, and we can now confirm virtually all are once again fully operational, with the remaining few stores scheduled to come back online shortly.”

The decision by stores to hand out free drinks was a no-brainer, according to the Starbucks spokesperson.

“At Starbucks we always strive to create the best moment in every customer’s day. Providing our customers with free beverages aligns with our mission and values,” said Ms. Lowenborg-Frick.

DISCUSSION QUESTIONS: How common is it for retailers to have problems after updating systems software? What can retailers do to minimize the risk of outages such as that experience by Starbucks? Did Starbucks go far enough in addressing customers inconvenienced by its outage?

Please practice The RetailWire Golden Rule when submitting your comments.
Braintrust
"The free coffee was a clever remedy to a situation that could have spun out of control and garnered Starbucks a black eye."

"Free coffee AND muffins … and I was back this morning to buy more and happily pay for them."

"“If you want to be a millionaire, start with a billion dollars and launch a new airline,” says Richard Branson..."

13 Comments on "Did Starbucks turn its POS outage into a win?"

As a career marketer, I continue to marvel at the efficacy of Starbucks’ marketers. Here in this space we could talk all day about new cloud-based options for “POS redundancy” and “fail-over,” but the consumer media will be talking about the free coffee. This is a flat-out no-brainer: Starbucks turned a negative experience into a memorable, positive experience. Without question, impacted customers will talk about how Starbucks made good out of a bad situation.

I can just picture local media in impacted markets covering the story and featuring plenty of quotes and interviews with lots of happy customers talking about their experience. People will savor their free drinks and the positive PR will be worth FAR more than the cost of the free coffee.

Retailers and consumers need to consistently update their software. Starbucks handled the outage very well, meeting the situation with humor and its trademark strong customer service. Once again, Starbucks shows the retail community how to properly handle an unexpected, bad situation.

Starbucks effectively pivoted what could have been a customer experience nightmare, into public relations “liquid gold.” Certainly a system-wide software crash could have had significant effects however, by offering free coffee and a smile in the midst of a bad situation, Starbucks has earned far more long-term loyalty points than what their mobile app loyalty system can offer. Perhaps this is a small shift back to their barista/local coffee house mission statement?

Small gestures such as what occurred yesterday go a long way to ensure long-term customer engagement and loyalty. With that said, it will be up to Starbucks and other major retailers to do their due diligence and have risk mitigation contingency plans in place to ensure minimal-to-no systems outages. However if they do occur in the future, events like yesterday could be resolved with free coffee and a smile.

Go Starbucks! Doing the right thing when faced with a POS outage shows great training, a focus on the customer and putting continued customer satisfaction first, ahead of profits. This is the result of great training, a customer-first attitude at headquarters and having both management and employees on the same page — in order to make the customer happy. Why is it that so many great retailers are located in Seattle with this same attitude (like Nordstrom, Starbucks, Amazon and Costco)?

A business that operates 365 days a year has only a short window to implement software changes, so the potential for trouble exists. That said, as a Monday morning quarterback, they may need more test systems at the back office to test for potential problems before a live implementation.

Nevertheless, no one doesn’t like free. So the free coffee was a clever remedy to a situation that could have spun out of control and garnered Starbucks a black eye, even with unaffected customers.

I think it’s amazing that with all the technology we rely on today that there aren’t more glitches. Yesterday Starbucks’ POS software update was unfortunate, but there have been many times when systems have been down in stores and people couldn’t use credit cards. Starbucks could have insisted on cash-only, but I feel giving customers free coffee was a brilliant move. I always tell people that mistakes will happen but what is most important is how you handle them with your clients. Many times when there is an issue and the person accepts fault for it and provides a customer something in exchange, the company winds up having not only a happy customer but a loyal one looking forward to doing business again. Starbucks already has a huge fan base but the move yesterday shows that no matter how successful they already are, Starbucks appreciates and values everyone who buys from them. I am sure they will be more careful in the future about system software updates as anyone in business should be. But in… Read more »
3
|
0
-   Share

Note the decision to give free coffee was “made by the stores.” That is the key to a great customer connection. Compare that to the fellow with United Airlines who referred to “the manual” to make the decision to not let two girls wearing tights on the plane. Starbucks drives the decision-making down to the people who interact with the customer. Most retailers do quite the opposite.

How many times have we had a retail associate “not be able” to do something because it was against policy?

Free coffee AND muffins … and I was back this morning to buy more and happily pay for them.

The individual Starbucks stores and most probably the regional or district managers made a wise decision. Starbucks comes out the winner. But we are talking about a low-cost item. It would not be possible for many other businesses to make the same decision. Good job Starbucks.

I don’t know about how common it is for retailers to have software problems. I know that most retailers would shut down if they couldn’t receive payment. However, this incident with Startbucks is a textbook study on the right thing to do. They stated they would stay open, as most of the locations with the problem did, and took care of their customers. That means they still gave the customers their drinks but didn’t take their money. Why?

Because, taking care of customers is sometimes more important than the money.

Starbucks usually turns a coffee bean into coffee. This time they turned lemons into lemonade. The payment system outage was newsworthy, regardless of the free coffee given away. What Starbucks did was metaphorically get into the lemonade business. The payment system outage was the lemon. The ecstatically happy customers, and a little good press, was their lemonade. Kudos to Starbucks for showing us how a truly customer-focused company operates!

Happy customers and good PR — all at the price of a few cups of coffee. It’s time for Starbucks to expand and buy an airline.

“If you want to be a millionaire, start with a billion dollars and launch a new airline,” says Richard Branson, who ultimately sold Virgin America to Alaska Airlines. As Alaska is another Seattle company like Starbucks, now’s the time if they can part with the money!

Starbucks did a wonderful job handling the situation and turning it around to work in their favor. Their solution wouldn’t work for everyone, but taking a single day’s loss of free drinks instead of trying to avoid losses completely is a brilliant strategic move. It isn’t often you hear about a system upgrade going bad like this, but when you do, it usually ends up being a PR nightmare for that company. Tough luck for most but Starbucks managed to make their own luck here.

Braintrust
"The free coffee was a clever remedy to a situation that could have spun out of control and garnered Starbucks a black eye."

"Free coffee AND muffins … and I was back this morning to buy more and happily pay for them."

"“If you want to be a millionaire, start with a billion dollars and launch a new airline,” says Richard Branson..."