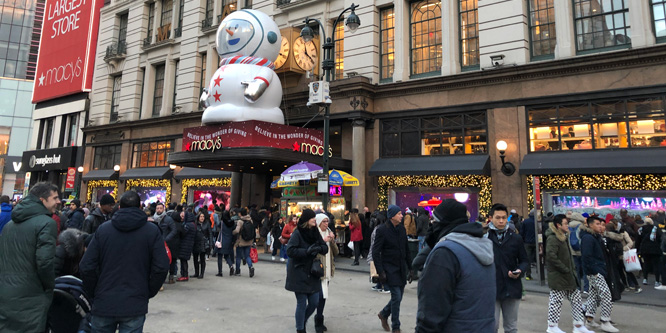 The next biggest shopping days were Dec. 14 ($28.1 billion) and Cyber Monday ($19.1 billion). With only expedited shipping options left, Super Saturday tends to be more of an in-store than online event.

While foot traffic was down at most malls, the conversion rate, or the percentage of people who go to malls and make a purchase, increased, Customer Growth Partners said.

Super Saturday was expected to gain a boost from the compressed holiday selling season. The season saw six fewer days between Thanksgiving and Christmas and one less Saturday this year versus 2018.

NRF’s survey predicted 147.8 million planned to shop on Super Saturday in the U.S., up from 134.3 million last year.

In recent years, however, total sales on Super Saturday have edged closer to Black Friday, the latter losing significance as holiday deals arrive as early as September and aggressive promotions continue throughout December.

Super Saturday is also being increasingly promoted by retailers, with most chains offering deals and extending hours to 11 p.m. or midnight.

At Macy’s, the first 250 shoppers at each location were given a free $10 Macy’s Reward Card. The retailer opened most of its stores at 7 a.m. Saturday and offered doorbusters until 1 p.m. and online all day. Kohl’s and Target were also promoted day-specific deals, while other chains began offering last-minute deals that extended through December 24.

Super Saturday is also referred to as Panic Saturday because the day attracts last-minute shoppers. However, some shoppers believe the deals get more broadly better just before Christmas as retailers start panicking.

DISCUSSION QUESTIONS: Has Super Saturday become a more critical day for retailers than Black Friday? How has executing on the day evolved with digital’s influence, deals arriving throughout the season, markdown-trained shoppers and other factors?

Please practice The RetailWire Golden Rule when submitting your comments.
Braintrust
"This is the normal way of things. What’s truly new is the advent of gift cards turning January into a viable selling month."

"For consideration: Retailers might do well to re-frame this under a single, optimistic heading. How about “Jingle Days” instead of “black” anything?"

"What a nice exclamation point to a robust holiday season. Looking forward to seeing this positive momentum carry over into 2020."

17 Comments on "Is Super Saturday rivaling Black Friday in importance?"

A shorter holiday season caused a lot of people to procrastinate this year. Retailers knew that and many retailers resurrected their Black Friday deals or sweetened them more to get the traffic in the doors. I really think it depends on the calendar – but with retailers in some cases offering one-hour delivery who’s to say the field next year won’t be open with more options?

As interesting as they are from an analytical perspective, looking at individual days is pretty pointless – especially as we now have so many of them! What really counts is how much is spent over the entire holiday period and how this compares to last year.

That said, it doesn’t surprise me that Black Friday has lost importance. Spending for the occasion is now spread over a longer period which includes Thanksgiving Day and the subsequent weekend. Equally, Super Saturday was relatively more important this year as Thanksgiving fell late and more people than ever left their shopping until later.

While conventional wisdom continues to predict brick-and-mortar’s demise due to less traffic in the mall this article points to growing higher conversion rates in-store. The browsers are online, people in a store are more motivated to buy. Retailers in 2020 will realize it is about training associates to take advantage of the predilection of those entering stores to buy regardless of day of week or season.

That’s a good way to put it: retailers panic on the Saturday before Christmas, not consumers. They just wait around for another good deal.

Retailers killed Black Friday, not consumers. This year we had Spring Black Friday and Summer Black Friday, and deals that some retailer or another called Early Black Friday happened every other week. It made the actual day a moot point.

Super Saturday is a day consumers are only starting to grasp. Where it goes from here, and how it is defined, will depend on how the retail industry chooses to exploit it. You want a single big day? Don’t water it down. But if you want just another ho-hum day of sales follow the Black Friday template.

The concepts of Super Saturday, Black Friday, etc., are really opportunities to promote and fulfill customers’ needs and expectations. We know Super (Panic) Saturday will be a big day, so let’s make a big deal about it. We still must navigate the balance of digital versus in-store. The digital retail revolution continues to grow and change the retail landscape, but that doesn’t impact what our customers want to buy, just how they go about buying it. Holidays are opportunities to sell more and, if managed properly, build a stronger bond with the customer. And new customers come in during the holidays. Combine the experience with the right promotions and reap the benefits of a potential repeat – and maybe even a loyal – customer.

I suppose this is all a matter of how long your memory is. As I recall, the last Saturday before Christmas was always a bigger deal than Black Friday … until the industry got into door buster madness.

This is the normal way of things. What’s truly new is the advent of gift cards turning January into a viable selling month.

Black Friday has already lost some of its luster as promotions and discounts start earlier and earlier in the holiday season and it seems like every other shopping day is some kind of promotional event. Super Saturday’s success lies more in the procrastinating nature of shoppers and this year’s short holiday shopping season.

The last Saturday before Christmas has always been, and will always be, a very important day for retail. All the over-hyped, over-discounted Black Friday and Cyber Monday nonsense is in the rearview mirror, and shoppers are hitting the stores looking to buy. This is our chance to help shoppers complete their holiday shopping and earn a chance to keep them coming back all year long. I am terrified that even using the term “Super Saturday” will encourage over-eager marketers to turn it into another in a long list of days full of panicked promotions and another race to the bottom.

I look at this scenario a little differently. It was inevitable that Black Friday promotions would be pulled forward and that specific day would become diluted. Deals offered in the context of Black Friday can be planned and managed within the context of the season. Deals and promotions offered on Super Saturday are a little trickier. It becomes a function of weeks of supply and planned exit dates. Either sell it in the couple of days before Christmas at X percent margin or sell it in January/(February) at less than X percent margin. Probably a lot less than X percent. How much business is rung up in the four or five days before Christmas? How much is rung up in total during January? What is the strategy for seasonal conversion and maximizing margins? Yes, Super Saturday is important, but not compared to Black Friday. It’s more important to look at it compared to January.

Gone are the days where pure-play brick-and-mortar operations ruled the world and Black Friday was the most important shopping day of the year from a retailer’s perspective. Traditional retailers had to plan for months leading up to Black Friday to ensure they had the right levels of merchandise in place, store operations team members staffed, as well as their logistics and warehouse teams working overtime to meet the expected demands.

While Black Friday may have lost its luster, in our digital-first world Black Friday (along with every other day during the holiday season) matters. It’s all about pleasing the customer and meeting their needs across every shopping channel, and across the entirety of the shopping season. Yes there may be significant savings to be had on Black Friday or Super Saturday, however, the customer is the one who is dictating how and when they will shop.

I used to manage the “last-minute” businesses at Kohl’s, like jewelry and cosmetics, so the final Saturday before Christmas was always a bigger deal than Black Friday — even in its heyday — in many of these areas. At the same time, the calendar has a big impact on sales on any given day. When Christmas falls on a Wednesday, the last-minute sales tend to be more spread out over several days instead of being compressed into one day.

But other issues have changed the importance of last-minute business vs. Black Friday sales. First, as others have pointed out, Black Friday lacks the urgency of the past because of the over-promotion before Thanksgiving and store-opening hours on Thanksgiving itself. Second, and more important, the migration to online retail has an “expiration date” for holiday shoppers if e-retailers can’t promise delivery. This forces “need to buy” shoppers to do something more and more unusual these days — go to a physical store and buy merchandise.

There will always be last-minute shoppers. Retailers would be well served to ensure they have staff, stock and delivery capabilities to accommodate the demand.

I guess the unasked question here is “does — or did — Black Friday (itself) ever matter that much?” Obviously, in a shortened shopping season every individual day is going to stand out more, but in the big scheme of things, i.e. the 364 days (or 365, including online) of sales volume, no one day matters that much. Or more to the point: it’s far better to have a good year, than (just) a good day.

The tighter timeframe meant holiday shoppers had to step lively in the few days after Thanksgiving. No surprise, then, that both Friday and Saturday were both very strong selling days.

The four-day-weekend after Thanksgiving will always be the most dynamic period of the year, whether the season is shorter or longer.

For consideration: Retailers might do well to re-frame this under a single, optimistic heading. How about “Jingle Days” instead of “black” anything?

And yes, execute the heck out of it, with quantity-limited daily deals and impeccably-merchandised stores.

I am happy to see that Super Saturday was such a massive success. What a nice exclamation point to a robust holiday season. Looking forward to seeing this positive momentum carry over into 2020.

Braintrust
"This is the normal way of things. What’s truly new is the advent of gift cards turning January into a viable selling month."

"For consideration: Retailers might do well to re-frame this under a single, optimistic heading. How about “Jingle Days” instead of “black” anything?"

"What a nice exclamation point to a robust holiday season. Looking forward to seeing this positive momentum carry over into 2020."