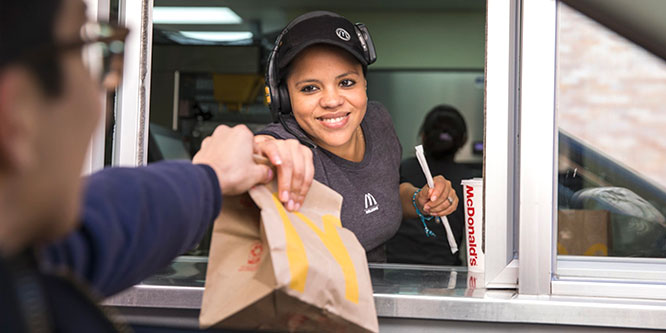 Every campaign (local, state or federal) to raise the minimum wage of hourly workers at the bottom of the pay scale in the U.S. has historically been met by protests from the business community over the potential side effects such actions might bring such as layoffs, higher prices to consumers and the demise of small businesses.

In today’s tight labor market, however, some of the very same companies and groups that have staunchly opposed raising minimums are now more willing to discuss the matter. McDonald’s, which has been a target of worker groups promoting a $15 an hour minimum, recently said it would stop engaging in a National Restaurant Association campaign to kill such efforts. It did argue, however, that a phased-in approach to raising the minimum wage would benefit both workers and employers, according to Politico.

The fast-food giant maintains that the minimum hourly wage it pays workers at company-owned and operated restaurants is currently above $10 an hour. Management says it believes that franchisees are largely offering similar wages.

Even the U.S. Chamber of Commerce, which has consistently argued for the market to set wage scales, has expressed a willingness to negotiate over the issue if safeguards are put in place to protect small businesses. The Chamber identifies small businesses as having annual revenues of $25 million and fewer than 500 employees. The U.S. Small Business Administration’s criteria is companies with up to 1,500 employees and up to $35.5 million in annual sales.

Costco’s recent announcement that it would raise its minimum wage to $15 for hourly workers followed a similar move by Amazon.com. Other retailers attempting to stand out in a tight labor market have also increased wages. Walmart raised its minimum to $11 an hour. Target, currently at $12, plans to move its hourly employees up to $15 next year.

DISCUSSION QUESTIONS: Does McDonald’s gain anything from its announcement that it will no longer oppose efforts to raise minimum wages on the local, state or federal level? Do you expect other large businesses to follow suit?

Please practice The RetailWire Golden Rule when submitting your comments.
Braintrust
"Any company that advocates or acquiesces to raising minimum wages has the opportunity to communicate how it cares about its employees."

"Coupled with data about when to best schedule employees to meet demand, living wages are just an essential piece of playing the new retail game."

"While studies on changes in minimum wage have been mixed, the reality in the hamburger business is that you are talking about a minor increase in price of the items."

The bigger question is, do taxpayers gain anything from McDonald’s and others accepting that the minimum wage is going to rise? Yes, we will eventually be able to stop subsidizing those companies via our tax dollars which go to pay for food stamps, etc. since the companies are paying so little that employees fall below the poverty line.

That’s not discussed enough, in my opinion, and we ought to bring it out into the light.

It is important that McDonald’s takes this stand. That is, if you believe customer interaction has anything to do with hamburger sales.

In the cutthroat world of fast food this is important. Only Burger King still believes you can out-menu the competition without standing for anything. others see it more holistically. Bravo McDonald’s.

Turns out that this seemingly altruistic move is self-serving too.

Any company that advocates or acquiesces (as in McDonald’s case) to raising minimum wages has the opportunity to communicate how it cares about its employees. Further, those organizations have a better chance of recruiting top notch candidates. And that’s particularly key in a low unemployment market.

But let’s not forget that news of McDonald’s pay scales impacts its reputation among current and future customers. Quite possibly McDonald’s customers also face or have faced inequities of wages. Note, McDonald’s likes to promote itself by saying most people got their first job at McDonald’s.

In today’s transparent world we see the stark contrast between salaries in the C-suite vs.those down the line. It will be more difficult (at least I hope so) to defend, much less justify low minimum wages.

However, when a company vocally opposes minimum wage, the public will respond negatively and it will hurt business. I would recommend to these companies, stay out of the controversy and do what you need to do with your employees.

While studies on changes in minimum wage have been mixed, the reality in the hamburger business is that you are talking about a minor increase in price of the items. And let’s face it, we will think nothing of that burger costing 10 cents more tomorrow.

Our insistence on paying markedly low wages has finally come home to roost…employees in these jobs can’t afford to purchase the goods we make. A recent Washington Post article addressed the issue of full-time workers in DC who live in tent camps. We as a society have to make this unacceptable.

McDonald’s accomplishes two things with its announcement. It gains goodwill with those that support a $15 minimum wage and I expect it gains some ire from those that oppose it. The first is easy to understand as a well known and funded opponent is gone. The opposite is true for those that oppose it.

For McDonald’s itself the direct impact is negligible. It owns and operates a very small portion of the locations that carry its name. Secondly many of their franchisees fall under the guidelines for small businesses meaning little direct impact on them. The indirect impact for them will come should the employment marketplace set this as the new standard.

Minimum wage as a general consumer issue has come of age. While there may not be a real positive uptick in sales to correlate, being on the wrong side of this issue will most likely have a negative impact on sales for any business. McDonald’s is making a wise move to stop their vocal and public opposition to minimum wage increases. Especially during a time where the competition for this labor has become quite strong, larger retailers, in general, are making their wage increases a publicity issue in addition to an employee well-being issue. This is something that will continue as society realizes more and more that what we think of as a living wage is not necessarily enough and certainly not as universal as we should hope to see.

It is impossible to retain a well-trained, efficient, content workforce if they are unable to commute, eat and live in a way that is conducive to showing up and selling your product well. This really isn’t that hard. Coupled with data about when to best schedule employees to meet demand, living wages are just an essential piece of playing the new retail game. You can’t compete otherwise.

“…phased-in approach to raising the minimum wage…” might be translated as “opposing it while seeming not to,” so just as some diet foods promise all the same great taste without all those calories, this is the same opposition without all that negative publicity.

I guess I’ll be the lone voice saying that artificially raising wages will only hasten the reduction in entry level, unskilled jobs. Workers will win the battle of seeing an immediate pay increase but will lose the war as companies introduce new, more productive ways to do the same task without a human performing it. Hello self-ordering kiosks! Welcome burger flipping robots! The fact remains some jobs just aren’t worth $15 per hour. A position that only requires an unskilled person to perform it shouldn’t command a premium wage. Sorry, but dunking fries and mopping floors isn’t worth that kind of money. And once the current labor shortage eases, as it eventually will, businesses will be saddled with a high-cost employee not worth their pay. The problem isn’t McDonald’s or any other company paying lower wages; it’s that those jobs were never meant to be ones that you’d try to support a family on. They are entry level positions that teach youth the basic skills necessary to function in the workforce: showing up on time,… Read more »
1
|
-1
-   Share

Braintrust
"Any company that advocates or acquiesces to raising minimum wages has the opportunity to communicate how it cares about its employees."

"Coupled with data about when to best schedule employees to meet demand, living wages are just an essential piece of playing the new retail game."

"While studies on changes in minimum wage have been mixed, the reality in the hamburger business is that you are talking about a minor increase in price of the items."