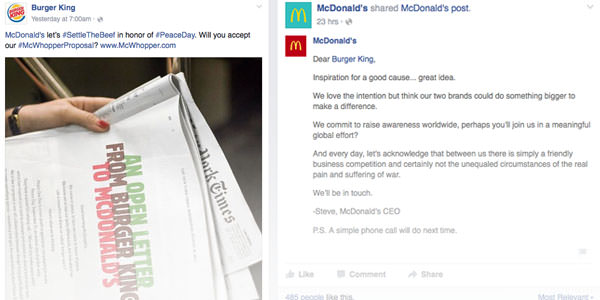 Burger King made an offer that McDonald’s could refuse. Perhaps, McDonald’s should reconsider.

The number-two burger chain placed ads in the Chicago Tribune and New York Times yesterday calling on its rival to join with it in a one-day promotion to create the McWhopper, a combination of the two companies iconic sandwiches, to raise awareness and funds in support of the International Day of Peace.

In a post on Facebook, McDonald’s CEO Steve Easterbrook expressed support for the two brands to work together to "do something bigger to make a difference," but took issue with Burger King’s copy that he saw as equating the "friendly business competition" between the two companies with "the real pain and suffering of war."

Mr. Easterbrook concluded that his company would be in touch with Burger King followed with a PS that "a simple phone call will do next time."

Responses on McDonald’s Facebook page were overwhelming negative. It seems that on the public relations side of the friendly competition between the two, Burger King came out ahead this time. Following are representative samples of responses to Mr. Easterbrook’s post.

"Way to screw up more than just my order this time McDonald’s." Samantha Koenegstein

"You missed the boat again McDummy. No wonder why your sales have slumped lately. Poor management. BK will get my business. At least they offered an olive branch instead of sarcasm." Jim Padilla

Did McDonald’s make the right decision or a mistake in turning down Burger King’s offer to join together to raise awareness and funds in support of the International Day of Peace? If you’re running McDonald’s, what do you do next?

Please practice The RetailWire Golden Rule when submitting your comments.
Braintrust
"I’m wondering why the McDonald’s PR team didn’t jump at this opportunity to really outshine the Burger King offer, showing the ability to take the high road, leverage a sense of humor, and further energize a market that certainly needs it."

"First off, this was a no-lose situation for Burger King, which I’m sure is why the ads got the green light in the first place. McDonald’s would have been better off just ignoring the ads, but now that they did such a poor job they need to fess up and say so."

Seriously? Burger King’s commercial was creative and fun and I really got a kick out of the idea as well as how they executed it. And McDonald’s response was to have no sense of humor and throw a cold bath over the entire idea? If they don’t want to go for it that’s up to them, but they really should have taken the time to craft a more genial response. Now they just come off as being rude.

Nobody expects McDonald’s to solve the puzzle of world peace and by discussing the pain and suffering of war they are showing that they take themselves much too seriously (something that never goes well on social media). McDonald’s PR team should put together a campaign to raise money to buy their CEO a sense of humor — and give the raised and matched funds to the International Day of Peace or a veteran supporting charity of their choice.

There are a lot of analogies. Bottom line is you don’t slow down in a race so that number two can catch up and you hold hands crossing the finish line. That would show weakness on McDonald’s part. McDonald’s PR people need to find a way to turn the tables now on Burger King and make them look bad for making such an offer.

Very interesting marketing ploy by Burger King, one that really puts McDonald’s on the spot in terms of a response.

In this case, McDonald’s could have removed BK’s first mover advantage by upping the ante, maybe with something that showed a real awareness and desire to address “the real pain and suffering of war” rather than the tepid non-committal response that was provided.

I’m wondering why the McDonald’s PR team didn’t jump at this opportunity to really outshine the Burger King offer, showing the ability to take the high road, leverage a sense of humor, and further energize a market that certainly needs it.

First off, this was a no-lose situation for Burger King, which I’m sure is why the ads got the green light in the first place. McDonald’s would have been better off just ignoring the ads, but now that they did such a poor job they need to fess up and say so. The CEO should get back on social media, admit their missteps, state the goal cited by Burger King is a great one and then one-up them with an idea like offering the McWhopper at all the stores, or giving 5 percent of revenue that day to the Peace org.

Given McDonald’s struggles lately, they would have been a lot smarter to embrace the clever nature of Burger King’s public invitation. They would have gotten a tremendous amount of good will and free publicity. Having walked the corridors of large retailers with significant competitors the hatred for each other is often just beneath the surface. They refer to each other as the enemy in very derogatory terms.

McDonald’s was too quick to remain predictable and corporate. They missed an opportunity and played right into Burger King’s hands. Unfortunate yet expected.

Social media is sometimes a can’t-win no matter what, and in this case McDonald’s looks bad to a large segment of the population. However, Burger King is in the drivers seat and they know it, as it would help the awareness of their burgers for a good cause. McDonald’s has many good causes, but it could have been handled better. I would have called and discussed ways to do something together without mixing the two hamburgers, and instead, had a contest to see who could raise the most money between them by selling something to the public in their own restaurants and giving a nice portion back to this charity. The combo deal only benefits Burger King and Mcdonald’s know this, so next time handle this with some friendly competition that benefits everyone and at the same time you can promote your own foods, with the end resulting in lots of cash for this charity. Bring back the BLT quarter pounder I ate in college many moons ago and I actually would go there to… Read more »
0
|
0
-   Share

I agree with Ron Margulis that Burger King had nothing to lose and McDonald’s should have ignored them. Burger King is not worthy of a response. I disagree on McDonald’s responding now. When you are number one you get to tell number two what to do, not the other way around. Allowing Burger King to get any mileage from this shows weakness. McDonald’s now needs to find a way to make Burger King regret what they did. Their response needs to be sure and effective so Burger King never does this again.

Well, have a little empathy for McDonald’s. I mean, imagine your main competition going to press with something like that without calling you to discuss or even finding out first if you agreed with the principles of what they were trying to achieve and with whom. I mean, Burger King basically put them in a corner that was a lose-lose. Intentionally and maliciously, in my opinion.

On the other hand, Easterbrook should’ve called Burger King to express his concern in person and find out what they were trying to do before just posting it somewhere, but that’s another thing (you know, bad advice). McDonald’s response should’ve been nothing until that happened.

So, to me, Burger King’s goal of making their main rival look bad worked. Good job, Burger King PR! Is that what it’s come to? Deceit in the name of a charity? Pretty sleazy.

McDonald’s needs a refresher course on Social Media 101. If they don’t know how to play that game, how can they possibly continue to win new customers?

This is easily one of the strangest stories of the year.

McDonald’s doesn’t have open grills, so it would never be able to duplicate the taste of a Burger King burger. McDonald’s needs to boost its PR, though, so perhaps it can challenge Burger King to make something it currently can’t, like the McRib.

In the pursuit of joining together for the sake of world peace simply by creating what could be the world’s first 3,000 calorie burger filled with cholesterol and naming it the McWhopper they are now in a war of words. With sales on the down slide for both companies I’m thinking this is not a good day’s work.

Trump has gotten into PR I guess—challenge and make the other guy look like a chump.

If BK were serious, they would have asked McD’s CEO about it first, not shot a cannon expecting a response.

If you look at the tweets after the annoucement, many customers said, “No” first.

Nothing to see, move along….

People who eat at MCDs are not usually the same people who eat Whoppers. This was a very public one day PR stunt pure and simple and McDonald’s is wise to stay far away and low key in their response. The idea of that quoted Facebook commenter that Burger King was offering “an olive branch” in the half-century burger wars in order for the two business rivals to work together for a greater good—to raise awareness for “Peace”—is absurd. Attempting to gauge reaction to almost anything (but especially to a competitor’s PR campaign that intentionally seeks to muddle brands) from comments left by people who have nothing better to do than post comments on the Facebook pages of fast food chains is probably not the best way to analyze future business strategy.

Is BK still the Silver Medalist? I thought it was Wendy’s! Anyway, I agree their tactic was unusual and, one might say, underhanded (who would have thought something could even be seen as underhanded anymore?); but I’m going to break ranks and defend Mickey D’s: you simply can’t afford to let your competitor call the shots, whether it’s giving up effective control over your trademarks, or having your stores sell their products (and make no mistake, this would be a seen as a BK product). They should ignore the social media fluff—how do we know the posters weren’t all BK employees? It will pass.

I think McDonald’s missed a big opportunity here. Sure, mixing the two burgers might not be a great idea, but it did give them a chance to capitalize on the moment. They could have one-upped Burger King with a better fundraiser or responded humorously, but instead they decided to take the offer as a jab. McDonad’s needs to come up with a creative marketing plan now and around International Day of Peace to make up for this.

How about this—invite the King to join Ronald at a Ronald McDonald house and make dinner together. People might not like McD’s burgers, but I can’t think of BK’s corporate charity off the top of my head….

The best move McDonald’s can make is announce a Red McRobin burger….

Braintrust
"I’m wondering why the McDonald’s PR team didn’t jump at this opportunity to really outshine the Burger King offer, showing the ability to take the high road, leverage a sense of humor, and further energize a market that certainly needs it."

"First off, this was a no-lose situation for Burger King, which I’m sure is why the ads got the green light in the first place. McDonald’s would have been better off just ignoring the ads, but now that they did such a poor job they need to fess up and say so."