New York City is trying to kick stores to the curb 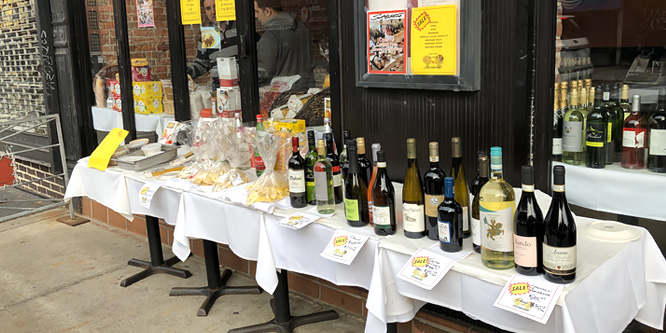 It is not an uncommon sight to find a table stacked with discount books for sale outside of a bookstore in Manhattan. As the U.S. continues into the next phase of the novel coronavirus pandemic, New York City has been hoping to motivate other types of retailers to take on that method of outdoor selling in order to give customers a safer way to shop and stores a way to keep their doors open.

The Open Storefronts program outlines criteria for NYC businesses to set up shop and conduct business on the sidewalk. The program is open to any ground floor business primarily engaged in selling products to the public, according to the program’s FAQ page. The guidelines it provides include requirements for the appropriate use of tents and umbrellas, the height at which merchandise can be displayed, distance from the streets and so on. The program has been available since early October and ends on December 31. Participating storefronts are not allowed to utilize heating implements outside of their stores.

Despite running webinars, training and speaking directly to retailers out in the community, the city has prompted little enthusiasm for the program, according to a Fox 5 New York report. Only 563 of the 40,000 eligible NYC businesses have applied to take part. Some retailers said that they believed the program was meant for restaurants. Others simply were not aware of it, or did not sign up for fear of having to close down entirely in the event of another full shutdown.

The program was conceived as being similar to NYC’s successful Open Streets initiative, which has allowed restaurants to move some of their operations onto the curb during periods when indoor dining has been restricted or banned.

The restaurant program has remained in place, although one neighborhood on the Upper West Side where it has been particularly popular has reported that some streets are blocked off to vehicle traffic during hours when restaurants are in operation, according to a Patch article from November.

DISCUSSION QUESTIONS: Will an Open Storefront-like solution work for retailers dealing with the likely continuation of COVID-19 restrictions on shopping? Why do you think the Open Storefronts campaign has not caught on like Open Streets: Restaurants and what can be done to address that?

Please practice The RetailWire Golden Rule when submitting your comments.
Braintrust
"This is a nice idea, but it is not particularly effective if the foot traffic isn’t there to browse and buy. "

This is a nice idea, but it is not particularly effective if the foot traffic isn’t there to browse and buy. The program is also of short duration and comes at a time when the weather is not always conducive for outdoor trading, so I can understand why many retailers are ambivalent about it. There are also likely some security risks from having wares displayed outside of stores on the sidewalk. But at least NYC is thinking and coming up with ideas to help retailers.

There is no choice here in NYC. Either you do what you have to do or you close the doors. Retailers pay exorbitant rents in NYC, and restaurant operators are at the ends of their ropes to try to make ends meet. They have all spent a great deal of money setting up outdoor spaces and built corrals around them with lights and heaters and still they are empty on most days, especially when the weather is cold. Workers carry tables and chairs back and forth each and every day and pray and hope the weather will cooperate.

Makeshift stores have always been set up around the holidays and many retailers that can set up at least some of their inventory outside, should.

If this program is eligible for 40,000 businesses, and less than 600 have applied, then I would say the city isn’t doing a good job of getting the word out. Independent retailers are doing everything humanly possible right now, and working harder then ever, to save their businesses.

In our town there is an apparel shop that regularly puts garment racks outside of the store. Sometimes it’s clearance goods but during the holidays the rack holds one each of all new arrivals and the sign reads, “More sizes inside!” It sits next to an easel sign offering gift suggestions.

It’s tough to bring the inside out because there are so many variables including weather, theft and having a store associate out there to help shoppers on the street. Not too much fun when it’s cold. But I am willing to bet that most of our indie retail clients would tell you it’s worth a shot.

I’m surprised to read this and learn that they needed permission. I’ve walked around some of the city’s older neighborhoods in New York and I always saw lots of street-level stores selling on the sidewalk. It was part of the charm of the city in my opinion. I don’t think this will have a big impact for retailers. It’s a Band-Aid at best. In-store experiences will always be more productive for retailers than a limited sidewalk assortment.

Five-finger discounts are bad enough in-store but I think you’d be a target on the sidewalk. I think retailers fully understand that which is why no one is doing it.

From my observations, I would guess that the reason so few NYC independent retailers have bought in to the program is that they are able to safely accommodate the (unfortunately) low rate of foot traffic inside their stores. Many post restrictions stating that they only allow three or so customers in the store at a time. One does see lines outside some shops, but the majority aren’t so lucky as to need to display their wares outside.

Further, many shops run with only one or two workers taking care of the business at a time, and these days they’re spending a good portion of their time fulfilling online orders. Are they going to position someone outside or at the door all day? Not likely.

Great point Rick! This initiative requires dedicating a full-time employee outside, which is prohibitive for most small stores. However: this might be a viable option in the busier days leading to Christmas.

It’s tragic to see how the COVID-19 pandemic has devastated the NYC shopping, restaurant, and mom-and-pop business scene. While most businesses have done everything possible to adjust to the new normal, it simply is not enough to make up for the 30 percent to 50 percent traffic shortfall due to social distancing and quarantine measures.

There seems to be a complete lack of communication about the benefits of this program. Perhaps it’s a lost cause, as the outdoor shopping space pales compared to the vast assortment inside the stores. From what I have observed, NYC shop owners have done an outstanding job of setting up appointment-only visits and limited the number of customers in their stores. This is a far more effective strategy.

This is a compromise to shutting the business down. Just as restaurants have moved to the streets, so must retailers (for certain non-essential businesses). There’s only so much storefront space, so having an online presence to showcase merchandise available, but not necessarily out front, is also important. For now, embrace what is available rather than complain about what’s not.

Is something — anything? — better than nothing? This idea puts the question to the ultimate test. I suspect for some, the answer will be “yes,” but sadly for most it will be, if not an outright “no,” then “not really.” There are just too many obstacles — weather, theft, logistics — for any but the smallest of businesses to move their inventory in and out on a daily basis.

Braintrust
"This is a nice idea, but it is not particularly effective if the foot traffic isn’t there to browse and buy. "