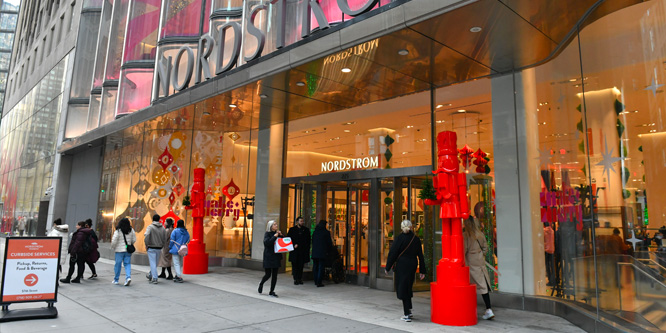 Nordstrom last week became the latest retailer in the apparel space to lower its outlook as it found that deeper discounts were required to clear slow-moving holiday merchandise.

Nordstrom’s sales in the nine weeks ended Jan. 1 were down 3.5 percent, with Nordstrom Rack fairing worse (down 7.6 percent) than full-line stores (off 1.7 percent).

“The holiday season was highly promotional, and sales were softer than pre-pandemic levels,” said Erik Nordstrom, CEO, in a statement. “While we continue to see greater resilience in our higher income cohorts, it is clear that consumers are being more selective with their spending given the broader macro environment.”

The additional markdowns resulted in year-end inventory levels down by a double-digit percentage versus last year and roughly at 2019 levels. Management is planning to focus on driving expense efficiencies and tightening buys.

Macy’s in early January indicated holiday-quarter sales would come in at the lower end of its expected range and warned of continued consumer pressures through the first half of 2023. Last week at the NRF Big Show, Macy’s CEO Jeff Gennette said gift-giving periods were healthy over the holiday selling season, but that the “lull” period — the first few weeks of November and second and third weeks of December when consumers typically purchase for themselves — was “more pronounced this year than in years past.”

Among other major apparel players, Lululemon’s shares tumbled in early January after the chain said fourth-quarter gross margin would arrive below plan due to discounts. Kohl’s and Gap earlier in the year slashed their guidance as promotional pressures on elevated inventories.

On its third-quarter analyst call, Erik Nordstrom said sales had begun to soften in late June, mostly at Nordstrom Rack, but both banners felt pressures from customer segments with the lowest income profiles in the third quarter.

He said the Rack banner continued to shift its emphasis to premium brands as part of its turnaround, while expense and inventory controls were being prioritized given the uncertain marketplace. He said, “The capabilities we built with our closer-to-use strategy, digital assets and supply chain optimization prepare us to manage short-term pressures.”

DISCUSSION QUESTIONS: Is Nordstrom’s shortfall likely more reflective of the broader challenges facing the apparel category or its own management strategies and processes? What steps should apparel sellers take to ride out the near-term turbulence?

Please practice The RetailWire Golden Rule when submitting your comments.
Braintrust
"Given their lead times and the somewhat seasonal nature of their business, it makes sense that this would be happening now."

"Nordstrom’s slump is as much a hiring issue as one of execution."

"Merchandising at The Rack continues to dumbfound. They used to merchandise by key brands whereas the last few times I’ve been there, they’ve cut back on that strategy..."

12 Comments on "Nordstrom gets snagged by apparel markdown pressures"

Wider discounting pressures were unhelpful. But most of this is on Nordstrom. Over the holidays, most department stores were a mess. Assortments were lackluster and disjointed and there were a lot of inventory overhangs from previous seasons. Nordstrom Rack is even worse. Since the pandemic, Nordstrom Rack does not seem to have been able to get back on the front foot. Its ranges have become increasingly dull with far fewer “gems” to delight customers. Inventory levels at stores are also sub-optimal and highly variable: some shops have far too much stuff and others have far too little. All of this creates for a poor shopping experience which has deterred shoppers from visiting and buying.

I think there are a couple of issues in play here. Coming out of the pandemic, consumer confidence is low. Consumers are concerned about inflation, economic uncertainty, and a slowing job market recently. This is coupled with a glut of inventory as pandemic supply chain bottlenecks cleared up and inventory flowed into stores. The mass merchants were dealing with this about six months ago, and now it’s the apparel retailers’ turn. Given their lead times and the somewhat seasonal nature of their business, it makes sense that this would be happening now.

It’s pretty clear that inflation is siphoning cash away from consumer spending on apparel at all levels of the business. Lululemon has previously been impervious to any softening, so if it’s hitting Lululemon, it’s for real up and down the spending spectrum. Layer on overstocks and the margin result is going to be obvious. I have yet to hear a rosy report from any retailer that says healthy things about sales and margins and inventories. There were just too many headwinds this past holiday season. So the supply chain may be normalizing somewhat, but demand forecasting isn’t going to get any easier any time soon. Orders are being placed now for Fall 2023. I can only hope that some prudent caution is being applied in the process.

Merchandising at The Rack continues to dumbfound. They used to merchandise by key brands whereas the last few times I’ve been there, they’ve cut back on that strategy and now just have racks of shirts stacked two-deep, which makes it very difficult to sift through. Women’s is a little better but my wife and daughters rarely find anything they like (the “gems”) and it is not their first choice to shop. Even though it is a discounter, solid merchandising and store layout strategies need to be implemented to make the experience better.

Based on my own shopping trips to Nordstrom (in-store and online) I have to agree with Neil’s tough assessment. I have never seen a full-line Nordstrom store so disjointed and overassorted in its men’s and women’s apparel areas, especially lacking in key items during gift-giving season. And for the upper-moderate shopper attracted by Nordstrom’s depth of “opening price” product (by the store’s standards), these choices are now sorely lacking. It’s not a large sample size, but my wife and I have repeatedly left empty-handed — making me believe that weak merchandise content is the root cause of the store’s inventory issues.

As usual, Neil’s assessment is on point.

What strikes me in the discussion is retailers always have the same answer to their problems and challenges — DISCOUNT!

This is almost everybody’s problem. It used to be you could forecast a year (or more) out. The economy and supply chain issues require tighter forecasting. Today’s best retailers must understand inventory, economics, and data. And a little intuition won’t hurt, either.

Interesting that Nordstrom Rack is performing worse than full price stores, despite the company’s sales slump being attributed to markdowns.

Nordstrom was once a leader in customer service excellence, but lately I haven’t seen that from the stores. Nordstrom’s slump is as much a hiring issue as one of execution. Motivated front line retail employees are becoming more difficult to find, but they’re also the prime differentiator for Nordstrom’s physical stores.

I think this is indicative of the category, not of any malfeasance on Nordstrom management’s part. Size/style/color/season is ALWAYS going to be difficult to nail, and that is a key to why the MSRP margins on apparel are so healthy — you need that buffer in order to make up for not being able to forecast what people will buy “in season.”

Going forward, I would expect to see fewer choices and smaller inventories until things get “frothy” again.

“…Down 3.5 percent, with Nordstrom Rack fairing worse (down 7.6 percent) than full-line stores (off 1.7 percent).”
So it’s really a tale of two stores: the actual store — which seems to be doing pretty well, and the off price, which … isn’t. I don’t know if this should surprise anyone as it seems to have been the story for much of the past decade, and given the relative competition levels — i.e. lots in the latter, not as much in the former — that’s to be expected.
It seems that each of the Big 3 upscale retailers — Nordstrom, Saks, NM — has followed Tolstoy’s observation of “being unhappy in its own way” with regard to their off-price affiliates and it might just be time to ask if they’ve been overextended.

It’s easy to blame the broader economic environment than accept responsibility. Nordstrom saw this coming in CY Q2 and while that was probably late for them to materially adjust inventory, this isn’t a new phenomenon for the company. Nordstrom caved to be just like all the other department stores years ago, moving from 2 promotional periods (Half Year and Anniversary) to being on sale 7+ times per year.

Their stores are hardly stoppable due to lower standards and staffing, their service not what it was (again staffing) and their assortments lack the distinct character they used to.

Excess inventory at Nordstrom is the result of inaccurate demand forecasting. Implementing a pre-order strategy, in my opinion, is one way to deal with inventory shortages. Accepting pre-orders assists retailers in forecasting demand for upcoming products. The strategy also provides retailers with a realistic picture of what sizes, colors, and options must be available. As a result, retailers stock the appropriate quantities of products and refraining from excess inventory leads to fewer markdowns at the end of a season.

Braintrust
"Given their lead times and the somewhat seasonal nature of their business, it makes sense that this would be happening now."

"Nordstrom’s slump is as much a hiring issue as one of execution."

"Merchandising at The Rack continues to dumbfound. They used to merchandise by key brands whereas the last few times I’ve been there, they’ve cut back on that strategy..."