NRF: Would digital experiences be even better with a human touch? 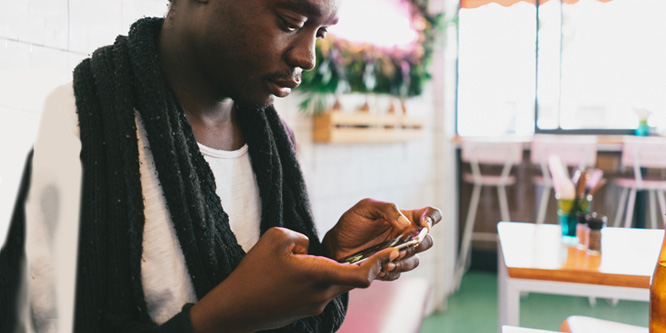 While retailers are increasingly experimenting with fully digital experiences, Jeremy Duimstra, co-founder and CEO of MJD Interactive, sees more potential in a “co-creation” model in which technology puts a retailer directly in touch with customers. He explored this concept in a session at the 2019 NRF show in New York City.

“Technology should be an enabler of people, not a replacement,” said Mr. Duimstra. “What you want is digital tools that help one-to-one co-creation with your customers.”

Mr. Duimstra pointed to The Container Store as a major success in the co-creation space. The retailer has an app that allows customers to take pictures or videos of their living space, explain their needs and send that information to the retailer, who sets up an in-store associate at the store’s flagship to collaborate on a solution that works.

Mr. Duimstra then explored how a sampling of brands could succeed with a co-creation model in a series of “how cool would it be” hypothetical scenarios:

Mr. Duimstra acknowledged potential concerns with implementing a co-creative model, such as difficulty demonstrating ROI, operational hurdles and skepticism about the possibility of making it happen. He suggested that it is  important to prototype, test, work out the details and figure out what it will take for something to scale during the development cycle.

“Great retail is human-centered and the digital tools let you get there,” said Mr. Duimstra.

DISCUSSION QUESTIONS: What do you think of co-creation — using technology to connect customers to in-store staff to collaborate on a product or solution — as a paradigm for tech success? How might retailers implement co-creation in a way that provides acceptable ROI?

Please practice The RetailWire Golden Rule when submitting your comments.
Braintrust
"Although technology will replace people power for some repetitive tasks, the interplay between both will dominate."

"Co-creation technology is not the only tool, but it is a driving force to make personalization possible in new ways on the customers’ terms."

"Some of this is “déjà vu all over again” enhanced by technology."

12 Comments on "NRF: Would digital experiences be even better with a human touch?"

Jeremy is spot on. As people focused on in-store innovation, our #1 mantra to clients is to focus on “the should vs. the could.” The second is to remember that technology needs to make the store experience MORE human, not less.

However, how this theory is executed needs to be focused on the brand (and expectations attached to it), the situations/frictions/opportunities, trends and tight measurement that tracks what we call “the three lenses”: behavior, emotion and transaction.

It all comes down to the business case — and revenue speaks louder than any form of NPS.

Combining technology with human interaction is the ONLY way to go, and Mr. Duimstra is on the right track. However, yes ROI becomes the challenge. Unfortunately, having to prove an ROI too often prevents what could be a very successful program from ever happening. Nevertheless, let’s look at some simple facts. Who enjoys calling a company with an issue only to face many and often annoying voice prompts before finally getting the chance to speak with someone? Still, when finally talking with the human being, who made resolving the issue a success, the voice prompts or the human representative? People do want technology, they want convenience, and they desire speed. Nonetheless, they still want human interaction because only another human being can speak with them, answer their questions, make suggestions and most importantly say “thank you” and make them feel good.

And after that, we just have a live video chat session with a staffer in a centrally-located customer service (call center?) department. Some of this is “déjà vu all over again” enhanced by technology.

In this era of omnichannel, a retailer’s single greatest challenge is to remain relevant. With shopper journeys taking place anytime and everywhere, co-creation technology enables retailers to engage at critical touchpoints, both in-store and online. More importantly, this technology enables staff to engage in ways to help customers find what works best for them. “Personalization” is touted as the new paradigm and foundation of engagement. Co-creation technology is not the only tool, but it is a driving force to make personalization possible in new ways on the customers’ terms.

The co-creation model espoused in the article is already in full swing. Retailers are arming store associates with technology that facilitates a personalized customer experience. Although technology will replace people power for some repetitive tasks, the interplay between both will dominate. I sum it up as “high tech will drive high touch” (rather than replace it).

Yes! Enabling, not replacing. 1+1=3. A skill multiplier. An experience creator and enhancer. ROI should not be difficult to measure with a crawl, walk, run approach. The right kind of testing will reveal the evolutionary path that works best. And if a business doesn’t want to be a pioneer here, no problem. Be a fast second.

Great in theory but — as always — the devil is in the execution model. For some retailers this might be perfect. For others, not so much. There are issues of liability associated with long distance diagnosis of symptoms, for example. And there is the obvious problem of scale. Co-mass customization? Probable in many categories. True scaled co-creation? Expensive and difficult. So I think we will see some form of interactive mass customization model for scaled companies and the real co-creation will remain the point of differentiation among boutiques.

I agree with Ryan. This could easily just turn into another form of scripted customer service. Getting the right people into each interaction and scaling across the enterprise could be a tough nut for many retailers. I see this as the extension of services, which is a plus, however each service must be carefully selected and implemented. Steps in the right direction. For my 2 cents.

This is often a solution looking for problem. Amazon is a great example of leading with digital experiences without a human touch. Their goal is to align products and services as effortlessly as possible in an online/digital environment. Why add a human touch to this when their audience is clamoring to eliminate human-based issues? Amazon focuses on what their customers want, and then solves this within the online environment.

Mr. Duimstra’s statements are in alignment with others in that AI will augment humans capabilities, not replace them. More human jobs will be created by AI than displaced.

Maintaining the human touch as technology invades the store is key. Co-creation makes a lot of sense, but it won’t be deployed by every retailer. It is something for the big boys (and girls) with the resources to executive properly.

Technology can be a platform for streamlining employees out of the stores, however it could also deliver employees into people’s homes. I think the example with The Container Store is the perfect look into the near future where employees will be an added benefit to their customer’s online shopping and guiding purchases as a good employee would have done in a store.

Braintrust
"Although technology will replace people power for some repetitive tasks, the interplay between both will dominate."

"Co-creation technology is not the only tool, but it is a driving force to make personalization possible in new ways on the customers’ terms."

"Some of this is “déjà vu all over again” enhanced by technology."