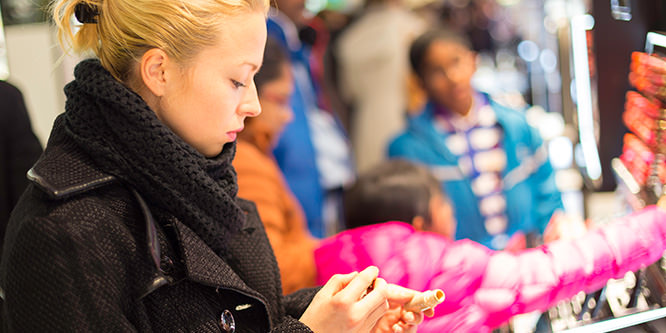 A pharmacy in lower Manhattan last week caused somewhat of an uproar by charging a one-day, seven percent “man tax” to its male shoppers to raise awareness about gender–pricing discrimination.

The move was in response to the “pink tax,” the name given to higher prices women pay for body wash, razors, deodorants and other everyday products. Last year, a study from the New York City Department of Consumer Affairs found women’s products across a wide range of hygiene products cost seven percent more than men in the city. Many were similar items.

“Women are spending more in general and we make less, so we deserve to have a break,” store owner Jolie Alony told Daily Dot.

Despite the announcements on the signs, men paid full price while women gained a seven percent discount under the one-day scheme.

The move was reportedly positively received in the store, but resulted in a flood of largely negative comments online over the last week as the story went viral. Posters charged that the chain was conducting in reverse sexism. Urging critics to “calm down,” the pharmacy described the scheme on its Facebook page as a “friendly reminder to treat your friends and neighbors as equal.”

In early October, Boxed.com, the online bulk seller of groceries and household products, similarly pledged to reduce prices for female-targeted items that are more expensive than those for their male counterparts. The cost of tampons and feminine pads — not subject to taxes in some states – were lowered by 9 percent.

Said Boxed CEO and founder Chieh Huang, in a statement, “We are taking a firm position in an effort to correct these gender pricing wrongs even if we take a hit on margin because we hope that this small change will be the catalyst to a great win in equality.”

DISCUSSION QUESTIONS: What do you think of campaigns focused on gender-price discrimination? Will the “pink tax” movement become a bigger issue for stores? How should retailers respond?

Please practice The RetailWire Golden Rule when submitting your comments.
Braintrust
"I would suggest it's money better spent to do something with real results. "

"As I’ve said in these discussions before, the hands-off approach to cultural and political issues can be taken as apathy and apathy no longer sells."

"Call it a stunt if you like, but I just love it. It helps raise awareness and nobody was harmed."

This was a stunt, but it was successful because it got our attention.

The events of this election season are provoking an unprecedented national discussion about what it’s like to be female. I don’t see a pink tax movement gaining steam, but our level of awareness is rising, and that in itself is promising.

Interesting gimmick to draw attention to the store, but not good for customer loyalty. Women should not have to pay more than men for similar items, but charging male customers more is not going to effect manufacturers, the folks who set the prices. If retailers are serious about this issue they should discuss their concerns with manufacturers and, if they don’t get a satisfactory response, drop the SKUs.

Remember region-based price discrimination? It has all but disappeared. Mobility, and the network-effect, continues to drive consumer-side price transparency. I do think that this will become a bigger issue for retailers who choose to leave this unchecked. Be authentic, be transparent.

This is just a big joke. The laws of supply and demand determine pricing. Why women choose to pay more I don’t know. Except when the government steps in and interferes like with health care premiums. Odd they don’t with life insurance premiums. Overall everything should equal out in then end. I’ve never asked a woman to buy a drink or pay for a meal. I’ve had car salesmen tell me women will often pay more than a man for the same car. Pay a higher interest rate on a loan. There are a lot of areas financially where men screw up as well. Ask any man who’s ever gotten divorced. It all evens out in the end.

One question. Did this do anything to get this practice changed? I would suggest it’s money better spent to do something with real results.

This issue is political, so I’m going to tread lightly. From a branding standpoint, I’m completely for their taking a stance on the fight for equality. I doubt these pharmacies will lose much business as a result of their charging equal rates for male and female toiletries for one day.

As I’ve said in these discussions before, the hands-off approach to cultural and political issues can be taken as apathy and apathy no longer sells. Millennials and Generation Z grew up with the Desmond Tutu quote “if you are neutral in situations of injustice, you have chosen the side of the oppressor,” which translates to where we spend our dime.

Retailers may respond by assessing where they as a company stand on issues of equality and advertising themselves thus. Whether or not you believe this movement is a publicity stunt, it sure got us talking about these retailers. And equality.

Basic economics. Same as when low income people in dangerous neighborhoods must pay more for their similar goods and services compared to wealthy people in safe areas. A lot of psychology goes into pricing. Commercials for ladies shampoo always makes me giggle. That shampoo is no different than what you will find in a a dollar store. Use of it will not turn anyone into a supermodel. But the higher price implies it will. I wish the nightclubs would have a men’s night where men drink free and pay no cover. However that would be a very expensive stunt.

This was a one-time (I hope) stunt. It got our attention. Now let’s move on. I would not be opposed to a one-day no tax on any purchase made by a woman. I would be opposed to the retailer trying to make it up by charging me the difference.

In this case it may have made some people happy and others unhappy, but it was great marketing. Here we are talking about what they did on a well-respected national forum.

Call it a stunt if you like, but I just love it. It helps raise awareness and nobody was harmed. As I understand it, men paid full price and women got a 7% discount. I wish this sort of thing happened more often. “Raising awareness” takes so darn long. I remember John Lennon (how I wish he were still with us) singing “Woman is the N***** of the World” back in 1972. Just Googled the lyrics; they’re just as valid today.

“Posters charged that the chain was conducting in reverse sexism.”

Just a perhaps inconvenient point of order. Why is this “reverse sexism”? Isn’t discrimination or demeaning of another sex “sexism” — period?

This market story is part of a larger issue on the gender disparity of taxes, which I talked about in a Huffington Post column earlier this year — “The Gender Disparity of Taxes: Toys, Tech, and Tampons.”

Well put, Jane! Thank you for this.

Retail and politics seldom mixes, and this illustrates why: it takes an issue with some complexity, and simplifies it for the masses … alienating both those who resent the simplification and those who still don’t “get it” (even after dumbing down).

Braintrust
"I would suggest it's money better spent to do something with real results. "

"As I’ve said in these discussions before, the hands-off approach to cultural and political issues can be taken as apathy and apathy no longer sells."

"Call it a stunt if you like, but I just love it. It helps raise awareness and nobody was harmed."