Retail Mash-Up: What if IKEA and Kohl’s birthed a new concept? 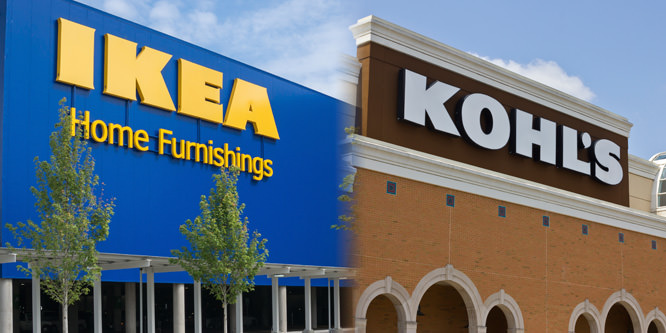 2017 has been a year of unexpected mergers and acquisitions. Amazon acquired Whole Foods, QVC acquired HSN and Walmart acquired nearly everyone else.

In RetailWire’s Retail Mash-Ups, we imagine what would happen if two radically different retailers were to collaborate to create a unique chain with both of their best qualities. Beyond any practical implications, the goal is to inspire creative thinking about the potential of such a collaboration.

For the purpose of today’s discussion, imagine a store created by IKEA and Kohl’s.

An international staple in affordable home décor, IKEA functions at such a scale that the company consumes one percent of the world’s lumber. While its minimalist home decor is a mainstay in many a college student and/or young adult’s first apartment, IKEA isn’t immune to challenges. The company has been scrambling to revamp its image after recent legal battles concerning the dire consequences of faulty dresser mounting.

One of America’s leading department stores with 1,200 locations, Kohl’s has struggled to remain relevant in recent years as an increasing number of customers forego traditional department stores in favor of online retailers. The Wisconsin retailer recently added Under Armour to its mix and branched out into its own off-price concept amid analyst concerns that the company may be going down-market.

When you step into an IKEA store, you pretty much sign over your life to the retailer for a while. Signs lead customers through a complex maze of decorated rooms with twists and turns every few feet. IKEA’s labyrinth-like store concept is designed to keep customers in-store and perusing inventory for longer amounts of time than they initially intended.

Kohl’s race-track design, by comparison, is designed for convenience. Kohl’s has the casual ambience of a discount retailer, with easily navigable store aisles and multiple checkout lanes to help to expedite the buying process.

Although Kohl’s and IKEA are very different brands, one can’t help but wonder if a store with the best DNA from both retailers wouldn’t just kill it with urban young parents, as well as appealing to price-conscious shoppers from rural areas.

DISCUSSION QUESTIONS: What kind of a customer experience could you envision from a concept parented by IKEA and Kohl’s? Would a store created by IKEA and Kohl’s have enough resonance with next-generation shoppers to maintain mid-level price-points, or would the hybrid company be doomed to go down-market?

Please practice The RetailWire Golden Rule when submitting your comments.
Braintrust
"Both retailers are fighting the same war -- there may be safety in numbers."

"The ONLY way this would work is if it were an adventure. Better yet, experiment with a portion of the store being the “themed” consumer adventure..."

12 Comments on "Retail Mash-Up: What if IKEA and Kohl’s birthed a new concept?"

The brands and shopping experiences in their current stores are completely different — Kohl’s racetrack versus IKEA’s 1.6 kilometer wandering journey to the meatballs. There would be difficult challenges in designing a combined physical store that would appeal across customer bases shopping in store.

Why bet millions on stores when you could test? Combine each brand’s core elements online to see how customers would respond.

The IKEA customer experience most definitely begins online. They have great visualization tools for planning what your rooms could look like. Increasingly, Millennials and young families are shopping IKEA just for accessories. It should be relatively simple to incorporate some of Kohl’s home furnishings and accessories into the IKEA online experience to see what sells. Incorporating IKEA into Kohl’s website could prove to be more challenging, but it’s a whole lot easier and less expensive to test consumer response online than to build stores.

I completely agree with you, Chris. Testing any wild idea of a mash-up is key. Try it in a store or two and test across additional foot traffic, customer satisfaction score effects, WOM impact, store sales volumes, upsell potential, basket size changes, etc.

I love the idea. Retailers need to continually experiment to find what resonates with their clients and what improvements need to be made.

IKEA’s store format divides: some hate it, others love it. However, those that hate it tolerate it as IKEA delivers on low prices, innovative products, an unparalleled range and an interesting store experience. It’s also a store more people visit infrequently and usually for big purchases when they are prepared to invest time.

For all of the improvements it has made, Kohl’s does not deliver any of these things. Getting trapped in a maze at Kohl’s would be like entering the second circle of hell (which would make the ninth circle of hell getting stuck in Sears).

Creative, out-of-the-box thinking takes many forms. Before being overly critical of a potential mash-up between these two seemingly different retailers, I recommend stepping back and asking, “Is the customer similar?” and “Do the two retailers offer something unique to shoppers without significant overlap?” I would venture to say that both align pretty well in terms of their ideal shopper and that their product lines don’t overlap.

If we assume the above factors to be true, then we next must look at what does a “mash-up” look like? I don’t think it’s a blend of both store models but rather some cross-pollination one category at a time.

Personally, I think this has some potential. And I would not be too quick to dismiss it. Both retailers are fighting the same war — there may be safety in numbers.

Uhm, let’s see … I’d say that mash-up would result in a store with very short — but slow — lines of people waiting for DIY products that were in fashion a decade ago.

The customer experience would be awful and we would — at last — have found a way to counter the much vaunted Swedish retail efficiency.

As to the last question, the hybrid would be doomed — full stop.

What a mash-up. Depending on which culture wins, you either get a scenario where a.) at IKEA when you get to the warehouse to pick up your book case, the size you want is not in the bin because all the sizes are in the wrong place or out-of-stock, or b.) Kohl’s finally gets good housekeeping and in-stock on sizes.

Since we are imagining new ideas — I think these retailer brands could come together around the concept of minimalism. IKEA already appeals to minimalists — basic Scandinavian furniture with a clean, modular design. Kohl’s could easily appeal to minimalists too by concocting seasonal capsule wardrobes that make it easy for a Millennial to plan their next Project 333. (That’s a minimalist fashion challenge that invites you to dress with 33 items or less for three months.) The irony of retailers appealing to minimalists (who typically reject an abundance of “things”) hasn’t escaped me, however I think it can be done via a specific section of the store, or perhaps a new store all together.

Maybe a new store idea combining these two that would work would be a walking journey (like IKEA), but with clothing and accessories used as artwork/thrown over the dresser as showcases. Perhaps the winding journey could show a mannequin-intensive display similar to a journey through a wax museum. A new interesting twist and turn at every corner — to emphasize the journey and experience to customers. This would have to be an adventure. It would have to be something that your customers tell their friends about.

Then of course, the customer experience has to be amazing, with associates ready to answer questions (often a challenge at IKEA). For the speed-conscious shopper, the journey would have to include many shortcuts to get to the product.

The ONLY way this would work is if it were an adventure. Better yet, experiment with a portion of the store being the “themed” consumer adventure and gear the rest of the store toward speed of purchase.

Kohl’s is aggressively hi-lo and coupon-based; IKEA is everyday low price. One thing Ron Johnson taught us is that customers who like playing the hi-lo game don’t, for whatever reason, respond to everyday low pricing.

Plus the quality of merchandise follows the price strategy: if you’ve ever seen Kohl’s cheap IKEA knock-offs in their BTS “dorm” shop, then it’s clear that any such hybrid would quickly race to the bottom.

Hmmm … logistically, I can imagine a Kohl’s inside an IKEA store, it would just be another room, albeit a large one, or perhaps a few rooms, so it wouldn’t be much different than having “kitchenware” and “lighting” rooms (just “babyware” and “shoes”). Would the clothing come in kits you have to sew yourself? Probably not. And neither store offers much in the way of service, so there wouldn’t be a problem matching operating methods.

I was reading an article that referenced computer science research about the difference between “exploration” (looking for new things, new ways of doing things) vs. “exploitation” (using what you already know). My sense is that IKEA shoppers are explorers and Kohl’s shoppers are exploiters. Therefore, it would be hard to make such a mash up work. Maybe the mashup already exists as Primark, at least in terms of some product categories (not furniture), not experience.

The two companies have decided to fight a brick & mortar war against an e-commerce economy. This will most likely make the inevitable take little longer.

Braintrust
"Both retailers are fighting the same war -- there may be safety in numbers."

"The ONLY way this would work is if it were an adventure. Better yet, experiment with a portion of the store being the “themed” consumer adventure..."