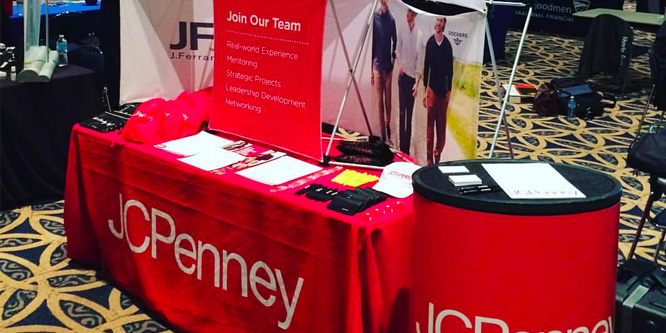 Many retailers are planning on bringing on temporary employees this holiday season to manage the added influx of customer traffic and orders. But low unemployment is pushing retailers to up their offers in hopes of convincing potential temps that working the Christmas season is worth their while.

In their attempt to court holiday workers, retailers have been starting early in the season and offering higher wages, profit-sharing and even paid time off for those willing to come on board, according to The Wall Street Journal. Kohl’s and J.C. Penney started hiring seasonal workers in June, three months earlier than usual. And J.C. Penney is offering one-week of paid time off for part-time hourly workers. Target raised its starting wage for employees hired after September 16 to $12, and Macy’s has begun offering bonuses to full- and part-time staff who meet sales and online fulfillment goals.

The technological demands of the new economy may also require retailers to be more certain of their seasonal employees’ baseline technical skills when they come on board for Christmas. Significantly more seasonal hires than last year at chains like Macy’s and Target will be focused on e-commerce operations and fulfillment.

Even without the expected holiday customer boom and corresponding need for additional staff on the floor and in e-commerce fulfillment, this year retailers have found themselves in a tough spot when trying to hire and keep qualified talent.

Stagnant wages well below the standards of other industries, a lack of flexible hours and a tendency of retailers to bring on workers part-time and without benefits has led qualified employees to seek work in areas with better prospects, according to a study cited on Industry Insider.

The tight labor market has had an impact on other parts of the retail supply chain, too. Walmart has been having difficulty finding qualified long-haul truck drivers to hire, according to Bloomberg. The chain has begun to offer referral bonuses of up to $1,500 and is drastically reducing the duration of the new hire onboarding process.

DISCUSSION QUESTIONS: Will the incentives offered by J.C. Penney, Macy’s, Target and others successfully attract the quality of seasonal talent the chains need to manage the holiday season? Do you see retailers falling short of their seasonal hiring numbers, and what should they about it?

Please practice The RetailWire Golden Rule when submitting your comments.
Braintrust
"Even with large numbers of store closures (Toys 'R' Us and Bon Ton, for example), the big chains will have trouble meeting their hiring goals. "

"It comes down to viewing hired team members as assets requiring continual investment."

"I would suggest retailers up their training so they become a place people want to work and tell their friends about..."

When you have to pay part-time workers for time off, something is wrong with your culture. Smart retailers understand high turnover is due to poor training. When employees are not trained and held accountable, they can feel their job is boring.

Like shoppers, it isn’t about how you attract them, it’s how you get them to stay. I would suggest retailers up their training so they become a place people want to work and tell their friends about — not where you have to beg them to apply in the first place.

Finding quality, seasonal staff has been a constant challenge, even in periods when unemployment is higher. Starting earlier is a great tactic, not just to snare the best talent early but giving a long lead time to training initiatives, which is particularly important if tech deployment is a growing part of these roles.

Even with large numbers of store closures (Toys “R” Us and Bon Ton, for example), the big chains will have trouble meeting their hiring goals. It’s not just Target vs. Kohl’s vs. J.C. Penney, but all of them vs. Amazon hiring seasonally for its fulfillment centers — and the higher-paying industries also looking to hire in our 4 percent unemployment environment.

Very interesting that The Wall Street Journal reported that retailers this year are looking for approximately 100,000 more temporary staff than last year. That makes a competitive market if you’re looking for some all-stars! So throw a little more money, give some paid time off … and I don’t think that’s the answer. It’s part of the answer. Today, these recruiting events (not just a table, but a place of creative interaction with store associate(s)) should show some key points: this place is fun to work at, it’s easy to become involved in our product and culture, there’s an opportunity to exercise your creativity, make friends and, most importantly, to be respected and appreciated. We’re not just filling slots, we are hiring the most important position in the store — the one that interacts with each customer and builds long lasting impressions and relationships.

To entice and more importantly retain the most talented team you need a positive work environment where employees can feel satisfaction and are empowered.

I think hiring is going to be tough for retailers this year. Consumer demand is up, so the number of positions also seems to be up. Yet the labor market is very tight. And with more consumers feeling better off, the necessity for some to work or take on extra hours is reduced. Retailers are going to have to get creative with perks and benefits to secure the best talent.

The low-unemployment environment is only exacerbating the perennial retail staffing challenge. These and other innovative incentives have to be offered to compete against many other industries’ attractiveness.

It’s a tale of two hiring patterns. The “digital” seasonal hires really don’t have that many technological pre-requisites. Who’s going to work for Macy’s seasonally that has serious technical chops? The “analog” seasonal hires need to feel like they aren’t merely warm bodies to cover the shops when more permanent workers are getting much needed rest. Retailers need to completely overhaul the meaning of employment, and particularly the benefits offered. There’s no reason why team members on the front-line that are struggling, who maybe are a bit more introverted, or lack some of the communication skills can’t be developed further, or worst case scenario moved into a fulfillment/distribution role. It comes down to viewing hired team members as assets requiring continual investment. “Retailers” is also a bit broad, as there are non-department store chains that will have no problem reaching their quotas.

We are in what is referred to as the “Gig Economy.” There are plenty of freelancers out there wanting the occasional “gig.” Perhaps Uber and Lyft drivers can supplement their income with some seasonal retail work. No joke! They are the ultimate “gigers.” They may or may not have other jobs. And they are used to the part-time work. Just an idea!

Wage increases, bonuses, flex-time, and holiday pay, and even childcare might not cover the battleground for this holiday season. The best incentive will be a road to permanence. It will be competitive and retailers know it. The winners: temp hiring agencies who can provide the supply. We’ll also begin to see technology rear its head in the form of self-service and automation, but to a far lesser degree — stores are just not ready for it at scale. Where tech will be valuable is in HR automation software for larger retailers to manage their temp labor (and their incentives).

Braintrust
"Even with large numbers of store closures (Toys 'R' Us and Bon Ton, for example), the big chains will have trouble meeting their hiring goals. "

"It comes down to viewing hired team members as assets requiring continual investment."

"I would suggest retailers up their training so they become a place people want to work and tell their friends about..."