RFID goes to the dogs 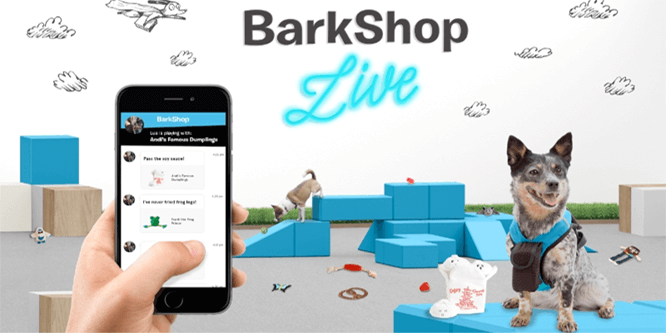 In perhaps another example of animal testing before human trial, Bark & Co, the company behind the BarkBox subscription service, tapped RFID technology to help dogs shop for themselves.

At a “pup-up” store opened from June 6 to 12 in lower Manhattan, dogs were able to play with unwrapped toys in an open environment. As each dog played, a high tech vest talked with RFID tags in all the toys and a mobile app on the smartphone of the dog’s owner, allowing the owner to see which treats and toys their dog was most interested in. The app also shared a recap of playtime for later viewing. The owner could then buy their dog’s favorite items, which would be shipped directly to their home.

“We made this investment as an experiment to see if there’s a way for dogs to do their shopping instead of humans,” said Matt Meeker, CEO and co-founder at Bark & Co., told Digiday. Providing a memorable experience for owners was also a priority.

The pop-up came in the same week Bark & Co. — which is aiming to become “Disney for dogs” through e-commerce, products, events and publishing — announced $60 million in new funding. Its monthly box of treats and toys has shipped more than 25 million products since launching in 2012.

The BarkShop retail experience was invitation-only and cost $30, which could be applied to any purchases. The store allowed five dogs in at a time.

Bark & Co. may explore other BarkShop pop-ups, as well as permanent stores and in-store shops inside brick & mortar partners. Speaking to the Wall Street Journal, Mr. Meeker said the idea was to create a store from a “dog’s-eye view” that’s “engaging, unusual and fun.”

DISCUSSION QUESTIONS: Does RFID hold the potential to transform pet shopping? Do you see any ways to extend the RFID-applications utilized in BarkShop to assist human purchases?

Please practice The RetailWire Golden Rule when submitting your comments.
Braintrust
"This experiment is just that, and a bit of a push of the technology-for-grins envelope."

9 Comments on "RFID goes to the dogs"

Interesting, cute and novel marketing tactic. However, I don’t like putting devices on animals and engaging them in something for the sake of making someone money. What would the reaction be if a store outfitted toddlers with an RFID reader to measure their interest in a pile of toys?

Hey Ken, I agree with you on all points except the last one. I’m sure there is a start up somewhere working on this for kids – anything for personalization – i.e. to make a buck.

My guess is that if it were done with kids and publicized, the negative reactions would outweigh the positives. My company has the technology to do it with children without them wearing anything, but we’ve never been asked to do such a project and would have to carefully consider all the ramifications if it ever came to be. Just sayin’ …

This experiment is just that, and a bit of a push of the technology-for-grins envelope. If we discover that there are forces at play with pets that we humans don’t see or sense, then this idea will have had some runway. If there are no such forces, then this application of RFID technology is a flash in the pan.

Since I love my dog like a child, the idea of having him pick his own toys has some appeal however … he can do that today at PetSmart, and without being chipped.

The thing is, most dogs will play with anything their owner engages them with. Not the same with goodies. They can be picky about those but if I pick up a toy and play, in a way that he likes to play, he will go back to the toy.

As for this concept? Not sure this dog can hunt. For my 2 cents.

This is yet another example of someone spinning publicity well beyond the merits of its value. A cute stunt that follows in the same footsteps as the Puppy Bowl. I guess you can afford such luxury when you raise $60 million!

There is an important distinction to be made here, relative to RFID. If I thought about it more, it might have been clearer whether this was active or passive RFID. When tags are placed on products, those are typically passive tags. That is, they emit no signals themselves, but a detector device detects the presence of the passive tag. I suspect that is what is in use here, with the more complex detector device attached to the dog — and that device can sense and report what passive tags are nearby — as on a toy the dog may be fascinated with. With active RFID, both the dog and toys may have a more bulky and costly tag, costing about 100X the price for those passive tags. Then an array of antennas, possibly one in each corner of a small pet store, “knows” where every tag is in the store, updated every few seconds. This would be an ideal way to get the full picture of what is going on in the store, with toys,… Read more »
1
|
0
-   Share

Social media buzz maker right here! As others have said here, it’s cute and goes a long way to show that the store cares about the pets. This being an actual long term strategy to help move pet products? I am very skeptical.

Will RFID ever be ubiquitous in retail? Only when it becomes compelling, showing real results with low costs. Is there an opportunity in this article’s case? Sure. There are multiple ways to leverage RFID via individual pets, product displays/cases, etc. The challenges remain in terms of sensor readability in certain situations, and tag implementation costs. I am a big believer in RFID for this and other use cases in retail and CPG, however previous filed attempts to implementing a widespread manner have taken its toll on the industries’ appetites.

Braintrust
"This experiment is just that, and a bit of a push of the technology-for-grins envelope."