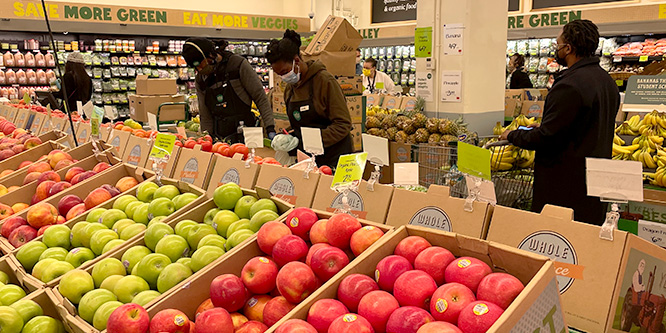 Any U.S. consumers who pay attention to their grocery receipts have undoubtedly noticed the increase in prices over the past year. One of the groups being hit hardest by the spike in grocery prices, though, consists of people who spend their work days surrounded by groceries.

Grocery store employees are having a hard time affording basic grocery staples in the face of inflationary grocery prices, according to an NBC News report. Beef prices, for instance, have skyrocketed 19 percent, and the wave of base wage increases major grocers have rolled out recently has not necessarily made up for such a dramatic rise in food costs.

As of last year, the median hourly wage of a grocery worker in the U.S. was $13.02. Anecdotes tell of full-time grocery employees who are unable to afford a cart of groceries and whose near-zero budgets only allow them to purchase fast food.

While recent inflation has made the issue more severe, food insecurity for low-wage employees and grocery workers in particular, was a known problem in the U.S. well before the pandemic.

In August of 2020, amid a discussion of low morale and burnout among grocery workers, Janice Fine, professor of labor studies at Rutgers University told the Washington Post that grocery jobs failed to pay sufficiently to allow people to support themselves and their families. This existing state of affairs was then compounded by pandemic factors.

A study from that same month said that many frontline workers in the food system were among the working poor who are unable to afford basic nutritional needs.

A report from late 2020 on the dramatic rise in food insecurity in the U.S. by Means and Matters numbers supermarket clerks among those most impacted.

In 2021, grocery prices were hit by inflation at a rate not seen in the previous 20 years, according to MarketWatch. The cost of groceries increased 5.4 percent this year. Staples such as meat, chicken, dairy, eggs, sugar and coffee are some of the products most impacted. Beyond groceries, the cost of living as a whole increased 6.2 percent in the U.S. in 2021.

DISCUSSION QUESTIONS: Is it possible for the grocery industry to alleviate food insecurity among its own ranks and remain profitable? If yes, does the industry have a responsibility to forcefully address the issue?

Please practice The RetailWire Golden Rule when submitting your comments.
Braintrust
"This is a complex yet solvable problem that the best retailers should be able to solve. "

This is shameful for the grocery industry. You need look out for the staff first, and customers second. All too often it’s the bottom line that dominates decisions. When staff can’t afford to shop in your grocery store, you have a massive problem.
Better pay and deeper employee discounts on purchases are needed. No one working in a grocery store should have to deal with food insecurity.

We are experiencing a major rise in inflation. In the last year, inflation has gone to approximately 6.2 percent. While some sectors have lower numbers, food prices have helped drive that number to what it is today. The question for food retailers (and any other type of retailer) is, “Where can we cut costs without impacting our employees and the customer experience?” There might be some opportunities in a more efficient process. Perhaps a strategic meeting with a supplier could find ways to lower the costs. All retailers should be looking for ways to get their costs down, even if it’s just a small amount.

Inflation is a tax on everyone, but it disproportionately affects middle to lower income individuals and families, which is why economic policies that generate growth and innovation are so vital to all Americans. Companies should do as much as they can for their employees, and voice opposition to broader policies that oppose employee-friendly outcomes through regular and consistent governmental affairs discussions.

Yes, it is possible for grocers to increase the pay for their employees to help adjust their income to keep up with inflation. It may result in a slight increase in product prices, but it is the right thing to do. Beyond grocery employees, the wage issue is even more problematic for segments that traditionally have some of the lowest wages, such as fast food employees. The minimum wage issue is a political football that needs to be addressed.

This is a complex yet solvable problem that the best retailers should be able to solve. Let’s consider all of the factors at play: there are labor shortages, inflation is raising costs and prices, there is still an enormous amount of food being wasted that is never sold, a lot of “expired” products are still edible and potable. On top of this, retailers control all of the levers to help alleviate this issue. They control employee discounts, pricing, wages, and waste policies. The smartest retailers have already increased wages to account for labor shortages and the increased risk of front-line work. They are already using the best pricing solutions to ensure that the largest price increases are not on the products most important to struggling consumers. They are already leveraging employee sale data to understand how to best promote and support the needs of their own. They should be evaluating wage increases vs. price increases as well and factoring that into decisions. It is quite shameful that anybody who spends their day stocking groceries should… Read more »
2
|
0
-   Share

Food retailers are major donors to food banks and other causes. They can turn these initiatives inward to first support their own associates while working on longer term solutions to raise overall compensation.

Food insecurity and grocery worker should never be connected in the same sentence. Grocers offer all sorts of benefits to their workers and some, like Wegmans, land on the “best place to work” list each year. It seems that subsidizing food purchases is a natural extension of current benefits. Let’s also remember the billions of dollars of food waste in the grocery industry. Could not some of that perfectly safe and edible product be offered to grocery employees for pennies on the dollar?

This is unacceptable. Every industry has a responsibility to take care of its workers. Just like there are credits given to retail employees in other stores, grocery workers should have discounts on items as well.

median hourly wage of a grocery worker in the U.S. was $13.02 Isn’t this really the story in a dozen words ?? The rest is just detail.

The average annual grocery spend in the US is just $4643 (BLS) or ~$367 per month — this varies by location and city, but should be an easy target for employers to manage. Even at the $13.02 wage rate, employees will cover basic food costs easily with 1 week of work. The 5.4% inflation amount is insignificant to most employees monthly ($20/month) and for the select items such as beef price increases up to 19%, an in-store discount would easily solve the issue.

The broader problem is overall wages and impoverished employees. The bigger culprit for poverty especially across low-end retail employees, is housing.

Braintrust
"This is a complex yet solvable problem that the best retailers should be able to solve. "