Should grocers get comfortable with food inflation? 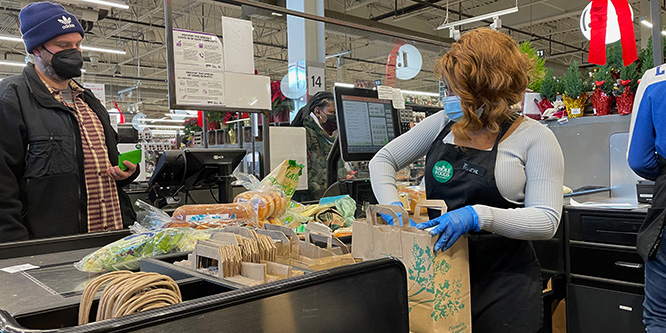 Nicholas Bertram, president of The Giant Company, in a column for CNN warns that food prices are at their highest levels in a decade, inflation pressures have accelerated in recent months and “there does not appear to be any real deflation on the horizon.”

“At Giant, we are trying to absorb as much of these higher costs as we can to avoid passing them on to customers and protect them from more frustration,” he wrote.

The U.S. Chamber of Commerce (USCC) said food prices at grocery stores were up 5.3 percent through October year over year, well above annual increases of 1.3 percent during the decade prior to the start of the pandemic.

To combat higher prices and food shortages, Mr. Bertram said Giant is sending products from warehouses to stores earlier than needed and in larger quantities to reduce truck trips. Giant and Martin’s stores are encouraging shoppers to use the Flashfood app, which allows them to purchase fresh food nearing its best-before date at significantly reduced prices. The chains are also bringing in products from both new and local suppliers and encouraging customers to be flexible and purchase only what they need.

“If we’ve learned anything over the past nearly two years, it’s how resilient each of us can be,” he wrote.

DISCUSSION QUESTIONS: Do you see a temporary or extended period of inflationary pressures impacting the food sector? What mitigation measures can grocers take to ease the burden on customers and their margins?

Please practice The RetailWire Golden Rule when submitting your comments.
Braintrust
"Waste reduction needs to happen wherever it can to help both grocers and shoppers feel less of the burden."

"Unfortunately, inflation and its pressures will remain until we get economic leadership and position across many areas of our economy."

"Inflation is a complex challenge, but it is inherently a pricing one and the right analytics, best practices and consumer focused response can lead to positive results..."

12 Comments on "Should grocers get comfortable with food inflation?"

I suspect that we’ll be feeling these inflationary pressures for an extended period. Notwithstanding all the negative impacts related to COVID-19, the economy otherwise is in great shape with unemployment at some of the lowest levels in years. Grocery margins were already thin, so their ability to mitigate is limited. The hard truth is that costs are going up, and consumers are going to feel the brunt of it.

I think it’s supposed to be “comfort food,” not comfortable inflation. Looks like we all buckle in. It’s hard to see where there will be new efficiencies that will help bring prices back down.

All of these variables are long-term issues, so I don’t see inflation going away any time soon. I love the idea of leveraging more of a dynamic pricing model and encouraging consumers to pay attention to that. This is yet another reason why strong demand forecasting models are so crucial. Waste reduction needs to happen wherever it can to help both grocers and shoppers feel less of the burden.

Inflation and rising costs are terrible for the consumer and in prior inflationary times, companies always passed along the costs without regard. Now you have the consumer at the center and retailers like Giant and Walmart consciously absorbing costs – this is a fundamental win. Additionally, these challenges cited are pushing innovation.

Inflation may become less of an issue over the next year, but it is not going away any time soon because there are too many disruptions and problems that have yet to untangle themselves. For grocers a bit of inflation is not a terrible thing, especially if they can use it to enhance margins which are under pressure from investments and profit-eroding commerce. That said, everyone – especially at the value end of the market – is very conscious about price increases so we’re seeing creative solutions like shrinking pack sizes, changing formulations, and adapting product mixes as well as straight price increases.

Unfortunately, inflation and its pressures will remain until we get economic leadership and position across many areas of our economy. As fuel production has decreased, supply chain challenges have increased, and continued growing regulatory pressures remain; inflation results. Over the years, many grocers have built their own trucking and warehousing vs. leasing. The more supply chain variables they can own and control will reduce the un-planned cost increases. Grocers have already trimmed the fat and operate on razor thin margins as it is. This is one area of retail that has limited cost reduction options.

Looking at the EIA charts of refined gasoline production — we are right back up to where we were before COVID hit, and oil pumping is at 2018-2019 levels. We were paying mid-$3 for gas in the Before Times and it’s right back to where it was, not higher. So I don’t buy the American Petroleum Institute’s line.

Labor shortages in trucking, warehousing, and retail are the biggest factor in overall inflation, and if we want to talk food inflation, shutting down all legal immigration has decimated cultivation and harvesting. We lost a million people to excess deaths/COVID, 2 million to early retirement, a half-million dropped out because child care is too expensive, and we’re 2 million short because the borders are shut. Tinkering with wages isn’t going to be enough.

I am not sure where you are getting your data about the current price being the same as before COVID hit, but if you go to the charts at EIA.Gov the November 2021 average price is 3.65 per gallon of “Regular Reformulated Retail Gas Prices.” The last time it was this high was in August 2014.

Before COVID hit was in January-February 2020 and the average right there from the same EIA.gov chart I am referencing above was around $2.70 per gallon.

That is a more than a 30% increase between now and before COVID hit. 30%+ is not “right where it was” and I can assure you various retailers, logistics companies, and consumers are also well aware of this increase.

I was referring to *production* in the EIA graphs, not pricing. Here in the Twin Cities, most pumps are $3.19 to $3.09, and we maxed recently around $3.29. Just before COVID hit we were around $2.85. But you make the point well, gas goes up and gas goes down and logistics networks take years to optimize — any planner should have been expecting mid-$3 fuel and not cheaper in the long haul. If your network falls apart because of a 20-30 cent flex *within the normal range*, your network wasn’t that good.

Pricing strategy is not a “once in a while” discussion. It needs to be looked at constantly. Inflation, supply/demand, overall costs, etc. need to be considered — and they are constantly changing. Change is not temporary.

Work with vendors to find ways to reduce costs to the consumer. When the retailer and vendor work together, sometimes great things can happen.

All indicators show that inflation may continue for a while and grocers absolutely need to not only get use to it, but put the right strategies in place to not only mitigate the situation but to create winning scenarios for all involved parties. Retailers who use the right consumer and pricing analytics have been able to surgically balance their pricing response to hold, decrease or only slightly increase prices on the products most important to their consumers while raising prices elsewhere. This creates a win for shoppers who are on a limited budget in an increasingly inflationary landscape and it definitely is a win for retailers who gain not only margin, but also share as a result of this approach. All four of the listed factors can also vary by region or channel, so savvy retailers are also considering this in their response with the right channel/zoning strategies to ensure that the right price is being offered at all times to the target shopper. This also applies to promotional practices where it has become even… Read more »
1
|
0
-   Share

Inflation will be around for the foreseeable future. It is a tough challenge for grocers to face, especially as we are deep into the holiday season. Rising prices continue to dominate consumers’ thoughts and actions at this time of year in particular, so any relief that grocers can provide will certainly set them apart. And while coupons and discounts certainly help consumers navigate increased pressure on their pocketbooks, they’re also a channel through which advertisers can extend helpful, meaningful support to each of their consumers—creating new moments of connection and opportunities for increased brand loyalty.

Resilience and creativity are key since margins are razor thin — uncovering operational efficiencies, implementing programmatic promotions that can flex as the market does, and full transparency in communicating the situation to consumers — are a few mitigation measures that should be considered to ease the burden on shoppers’ wallets and minds alike. How grocers approach rising prices this holiday season will have a lasting impact competitively.

Braintrust
"Waste reduction needs to happen wherever it can to help both grocers and shoppers feel less of the burden."

"Unfortunately, inflation and its pressures will remain until we get economic leadership and position across many areas of our economy."

"Inflation is a complex challenge, but it is inherently a pricing one and the right analytics, best practices and consumer focused response can lead to positive results..."