Should the cryptocurrency crash scare retailers? 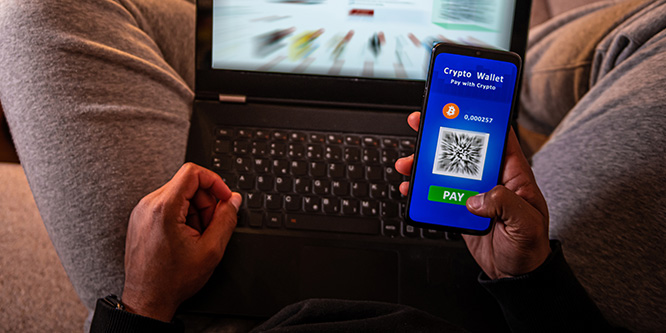 Nearly 75 percent of retailers plan to accept either cryptocurrency or stablecoin payments within the next two years, according to Deloitte’s “Merchants Getting Ready For Crypto” study.

The survey of 2,000 U.S. retail executives was taken in the first two weeks of December 2021, just before valuations on digital currencies collapsed.

According to Barron’s, Bitcoin, the dominant token, continues to trade at around one-third of its November 2021 all-time high, with the market capitalization of the overall crypto space also tumbling.

Survey participants saw the top barriers to adoption to be security of the payment platforms, cited by 43 percent; followed by the changing regulatory landscape, 37 percent; and the instability of the digital currency market, 36 percent.

Crypto’s crash has been dramatized by the meltdowns of stablecoin Terra, crypto hedge fund Three Arrows Capital and numerous crypto lending platforms, although risky assets overall, including tech stocks, have been battered inside the broader bear market.

Gucci, Balenciaga and Tag Heuer are among those this year joining Whole Foods, Nordstrom, PacSun and Crate & Barrel in accepting cryptocurrencies. American Eagle Outfitters drew attention for deciding not to accept crypto payments while recently launching an NFT apparel shop. Craig Brommers, American Eagle’s chief marketing officer, said at CommericeNext 2022, “When we thought about our 15- to 25-year-old customer, the reality is they were not ready for cryptocurrency.”

DISCUSSION QUESTIONS: Have you become any more or less confident about the value of cryptocurrencies as a form of retail payment since the start of the year? Have the barriers to adoption changed?

Please practice The RetailWire Golden Rule when submitting your comments.
Braintrust
"Accepting cryptocurrency is a great business plan as long as you treat it as you would any foreign currency."

"At this point, cryptocurrency is not the norm in any circles outside of criminal activity."

"It will take some time for cryptocurrency to become mainstream, but there are already many early adopters in the market."

13 Comments on "Should the cryptocurrency crash scare retailers?"

Yes, I’ve heard from many this was a fool’s bet to begin with. The perception of blockchain safety has been wrecked so it also calls into question all the chatter about blockchain in general.

Accepting cryptocurrency is a great business plan as long as you treat it as you would any foreign currency – on the payment date, the transaction is conducted at the going dollar rate and the accepting business needs a way to convert it to dollars pretty much instantly (with the payer covering any fees involved).

If more and more people own and use crypto then it makes sense for retailers to accept payment in digital currency. That said, I am not at all convinced that crypto payments will be anywhere near the majority of transactions any time soon. There are also a lot of hurdles to be overcome – including stability, the efficiency of the blockchain which still takes way too long to validate transactions, and looming regulation. The recent crashes have done nothing to establish confidence among a more mainstream audience.

Retailers that are looking forward in time realize that younger generations of consumers will embrace cryptocurrency and, as such, will spend real money to prepare themselves for accepting and securing crypto payments. (Look at how many retailers are delving into the metaverse, and it’s not for the sixty-somethings.). However for this to be successful, cryptocurrency has to be a stable currency. It cannot be prone to wild swings in value, or it will become burdensome to use and even problematic.

It will take some time for cryptocurrency to become mainstream, but there are already many early adopters in the market. I agree with what others have said — it needs to be treated as foreign currency.

Maybe I am a laggard or just skeptical, but I don’t own any cryptocurrencies and don’t expect retailers to offer this option. When consumers discontinue use of all other forms of payment (cash, debit cards and credit cards) then it will be necessary for retailers to accept cryptocurrencies. However that day may be a few years off.

I’m actually surprised by the Deloitte study, particularly the number of retailers who are willing to accept cryptocurrencies. Since its inception, crypto has been volatile and a risky source of payment. I am with AEO on this one!

Given crypto’s minute-by-minute fluctuations and frequent crashes, it’s a wonder that any retailer would accept it.

Unchanged: zero then, zero now (which isn’t at all a statement of how likely it is to be accepted, only how good an idea it is). As for the Deloitte … uhm, study, I’m curious who paid for it.

At this point, cryptocurrency is not the norm in any circles outside of criminal activity. The value of the blockchains, etc. may be real, but consumer and hence retailer confidence is not there to make it a real transaction mechanism. What retailers are doing now is outfitting their stores so that if it does become viable, the retailer will be able to announce that they are operational. This doesn’t mean expected use, but it does mean hedging your long-term bets. Many retailers were caught up in and already invested in enabling the tech from prior announcements of crypto.

Crypto is not going away, despite its volatile performance over the past 9 months. Retailers will be hard-pressed to decline any legitimate method of payment from customers over time, so they will have to adapt to the new order. Very low transaction costs could be a prime motivation.

The good news, I think, is that cryptocurrencies will gradually evolve from highly speculative investments into more stable and reliable alternative currencies. This must happen, or the entire sector will fail to gain widespread relevance. Managing currency fluctuations by the hour is way too much risk and work for most consumers.

Check out coverage of the upcoming Ethereum “merge” for one scenario of how the evolution might happen:
https://ethereum.org/en/upgrades/merge/
https://fortune.com/2022/08/01/ethereum-merge-solana-avalanche-tezos-react/

While these changes seem highly technical, they are intended to make Ethereum more secure and more usable at scale. The key questions for retailers: Which cryptocurrencies can we accept, and when should we start?

There are solutions such as Rocketfuel that remove volatility risk from the transaction by immediately denominating the amount into dollars (or local currency) as it goes into the retailer account. Not much doubt this payment type is coming to store near you soon, despite some of the problems it has encountered recently.

Many individuals don’t understand cryptocurrency and those who do regard it as an investment tool rather than a means of exchange of payment. On this topic, the perception of people’s awareness that we have is probably not true. Undoubtedly some retailers will make an investment in this concept, but has the moment come to go mainstream? I think it’s more of a wait-and-watch situation. The bigger issue here is, even after implementing the entire process and investing a significant sum of money, would the customer base use the cryptocurrency to make payments? It remains a question. On top of that, retailers still struggle to accurately track their inventory levels and can’t even efficiently implement a simple digital experience like BOPIS. Therefore, I believe retailers should re-think their priorities. Instead of experimenting, they should first make investments where the profits are obvious.

Braintrust
"Accepting cryptocurrency is a great business plan as long as you treat it as you would any foreign currency."

"At this point, cryptocurrency is not the norm in any circles outside of criminal activity."

"It will take some time for cryptocurrency to become mainstream, but there are already many early adopters in the market."