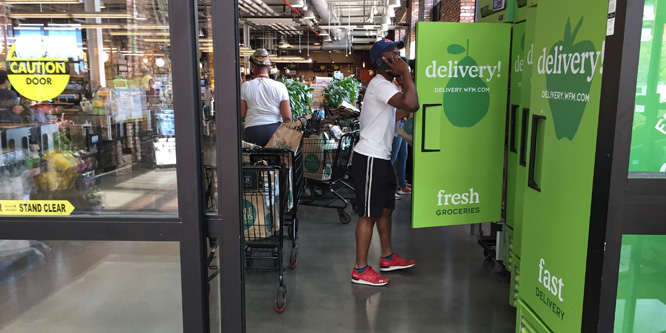 From Nov. 3 to 5, a number of Instacart’s drivers held a strike to demand better pay.

In a scathing open letter posted Nov. 1 on medium.com directed to Instacart’s founder and CEO, Apoorva Mehta, the striking “shoppers” — Instacart’s term for the independent contractors who fill and deliver grocery orders — called for Instacart to raise the default tip back to 10 percent versus the five percent they now receive after a recent policy change.

“You have demonstrated a pattern of behavior as CEO of eviscerating our pay and pirating our tips,” the striking shoppers wrote. “It would cost you, Apoorva, absolutely nothing to restore our previous tip defaults to at least 10 percent.”

Being on-demand workers, the strikers were encouraged to either refrain from signing up for any hours, refuse to accept any on-demand batches or to sign up for batches and let them time out.

A total of 212 shoppers signed the letter. It is unknown whether more shoppers beyond those may have participated in the strike but chose not to sign the letter. With Instacart claiming to have more than 130,000 shoppers in North America, the impact on Instacart’s operations appears minimal.

The bigger impact may be continued bad press as this marks the fourth consecutive year that Instacart’s shoppers have gone on strike. Non-striking workers may also suffer a loss of morale as distrust continues to grow over Instacart’s continually changing pay structure.

Massive media coverage arrived earlier this year as both Instacart and Doordash drew condemnation from customers and delivery workers for counting tips toward guaranteed minimum payments per assignment. Both Instacart and Doordash rescinded the tip-sharing policy in response to the social media uproar. Drivers for Uber likewise orchestrated a strike over fair pay and job security in May, just prior to that company’s IPO.

Rising concerns over gig worker rights led to the passage earlier this year of a law in California that could force gig economy companies to make their contractors into employees, subject to minimum wage laws and other protections. But the strikes and social media outcry shows on-demand workers have the potential to mobilize.

DISCUSSION QUESTIONS: Should retailers be concerned about the strikes, bad press and social media gossip over gig employees’ working conditions? How do you see the battle over the pay structure for on-demand workers playing out, and will the outcome be favorable for retailers?

Please practice The RetailWire Golden Rule when submitting your comments.
Braintrust
"This scenario is exactly what the retailers who signed up with Instacart and DoorDash should have expected when they signed up for this Faustian bargain."

"Income inequality is an issue of great concern to Millennials, and stiffing the drivers isn’t a good look."

"The companies are becoming extremely large, and the bigger a business grows, the more challenges it is going to have."

9 Comments on "Should the recent Instacart strike concern retailers?"

I should think that retailers would be concerned! Anyone and any business relying on a third party for a portion of their business wants the assurance that they are dealing with a stable entity that takes good care of its employees and pays attention to the details. Retailers need to feel that every service which they outsource is being performed by a reliable company in which disruptions of any kind don’t happen.

This scenario is exactly what the retailers who signed up with Instacart and DoorDash should have expected when they signed up for this Faustian bargain. Retailers have turned over their shoppers and related data, and are now complicit in a scheme to reduce the pay for the workers who represent them with consumers. This is not likely to end well for anyone.

Yes. This is troubling and foretells a mounting tsunami should other third-party providers put a wedge between retailers, employees, and customers.

From Uber to Lyft to Airbnb, we are in a new world of businesses, independent contractors, and “gig” workers, and with that comes a new set of rules that are continually changing. Whether Instacart is wrong or right on changing workers’ pay is yet to be determined, but the bad press won’t help because most people are sympathetic to anyone striking and tend to feel sorry for them. I would expect over the next few years to see legislation, more articles about the conditions of working for a particular company as an independent contractor, and even the possibility of more gig workers unionizing. This will lead to more changes in how these companies work regarding fees, employee pay, employee job requirements, restrictions, etc. The companies are becoming extremely large, and the bigger a business grows, the more challenges it is going to have. Instacart will resolve their issues and probably soon, but it won’t end there. We are at the beginning of a new era, and we will all have to wait and see how… Read more »
1
|
-2
-   Share

Income inequality is an issue of great concern to Millennials, and stiffing the drivers isn’t a good look. Bob Amster is right — retailers should be stable entities that take good care of employees and pay attention to details.

Retailers (and any business) should always be concerned about suppliers going on strike – or any other form of an interruption to business. This is why it’s smart to have back-up. Having a primary and secondary supplier is always a good idea. In this case, maybe Instacart gets 75 percent to 80 percent of the business while another supplier like DoorDash picks up the smaller percentage (or vice-versa). And any business has to be concerned about their suppliers having bad press. There are customers who care about who their brands do business with.

This situation shows conclusively that retailers need to have multiple options for the order delivery services. But while things like strikes prove the point, the need for more than one option arises from the cost prospective as well. Last mile delivery cost still makes online grocery a premium product, therefore having access to multiple delivery options an online grocer will be able to quote reliable and cost efficient service to its client!

Yes. Retailers should be concerned about the Instacart strike, since tips are a big part of their compensation. Tips should be earned and not mandatory, so the better drivers will understand this and will go out of their way to ensure heightened customer satisfaction and better tips.

Yet another cost of outsourcing last mile delivery. It’s a head-scratcher for me why any grocery retailer (mid-size and above) should not have anticipated this risk, along with losing control of customer data and delivery experiences.

Braintrust
"This scenario is exactly what the retailers who signed up with Instacart and DoorDash should have expected when they signed up for this Faustian bargain."

"Income inequality is an issue of great concern to Millennials, and stiffing the drivers isn’t a good look."

"The companies are becoming extremely large, and the bigger a business grows, the more challenges it is going to have."