‘Special day’ promotions can give retailers the distinction they need 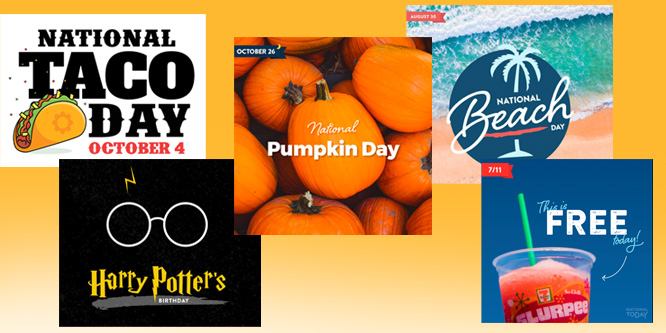 A new university study finds that consumers are more likely to use discounts celebrating a “special day” — such as pizza/pie promotions or 31.4 percent discounts for Pi Day (March 14) — than for standard holidays or one-day sales events.

The research led by Lehigh University said one reason consumers may be more open to deals on special days is that traditional promotions can generate “negative thoughts” because they feel commercialized.

The more surprising finding was that consumers appeared to be rewarding retailers for their ingenuity in developing a promotional event around a unique day. Daniel Zane, a marketing professor at Lehigh, said in a statement, “They actually think about how the marketer who created the special day-themed promotion was creative in providing a way to celebrate the special day.”

Retailers and food establishments can take advantage of the appeal of special day-themed promotions by tapping the nearly 2,000 national holidays that have arrived over the years.

Among the most popular special sales days already include National Ice Cream Day (third Sunday in July), National Coffee Day (September 29) and National Taco Day (October 4). Many running stores plan events around Global Running Day (first Wednesday of June). Sales of apparel, games or toys have been pitched around Mario Day (March 10) and Star Wars Day (May 4 – “May the Fourth Be With You”).

The researchers said the promotions should be “original and appropriate.” A spa pedicure discount would fit for National Barefoot Day (June 1), but not an apparel discount on National Food Day (October 24).

Researchers said business establishments can also come up with their own special days, such as celebrating their founder’s birthday, an anniversary or the day that a company adopted its mascot dog. Lands’ End declared March 23 “National Swimsuit Day” in 2017 and has celebrated the day annually since.

Special days can be further personalized around customers’ interactions, such as the anniversary of a customer’s first purchase. The researchers said, “It is possible that consumers who receive special day-themed discounts may feel they are unique or in an exclusive subset of consumers receiving the promotion.”

DISCUSSION QUESTIONS: Does it make sense that special day-themed promotions are more productive for retailers than traditional holiday campaigns? Should retailers aim to hold a few special sales days every year or hold them more frequently?

Please practice The RetailWire Golden Rule when submitting your comments.
Braintrust
"Campaigns that engage and educate the consumer, not just sell to the consumer, are the key."

"This is a form of experiential retail in that it gives the consumer an 'outing' to go with the 'purchase.'"

"With the emergence of social commerce, adtech, and martech capabilities, special day-themed promotions are becoming the norm."

It’s a refreshing way to communicate with the customer vs. the ubiquitous one-day sale of days gone by.

Special day promotions are often limited to the day in question, so there is an urgency to using any discounts. Usually, they are also focused events which capture attention around a particular category in a way that general discounts and promotional periods do not.

A facet of the creator economy that we are living in today is the consumer’s desire to connect with brands that are original, authentic and relevant. Most certainly today’s retailers should hold unique special sales days every year to remain relevant, and also participate in day-themed promotions that align with the brand. Campaigns that engage and educate the consumer, not just sell to the consumer, are the key.

Gee, we haven’t had tacos recently. Let’s do it! When is National Ice Cream Day?

With the emergence of social commerce, adtech, and martech capabilities, special day-themed promotions are becoming the norm. The legacy model for retailers only to promote during traditional holiday campaigns is outdated, especially as consumers enjoy day-to-day engagement, storytelling, and authentic brand experiences.

Creativity and a compelling reason to buy is a much more interesting proposition than “one-day sale.”

Special day-themed promotions make sense on a number of levels: they break out of the noise, provide a sense of fun, and create a feeling of urgency.

This is a form of experiential retail in that it gives the consumer an “outing” to go with the “purchase.” It gives shoppers an excuse to make an occasion out of consumption, which I firmly believe consumers perpetually want.

I have never been a fan of special day promotions unless they address consumer needs. Many of the days are simply self aggrandizing. Today is National Metric Day as well as National Angel Food Cake Day. Who cares? Probably not consumers! If the days are original and appropriate they may resonate with consumers and make a difference. Unfortunately, most of the 2,000 national days are neither original nor appropriate to consumers.

Special day promotions are a great way for retailers to promote their brand promise and get customers more connected. It can even be fun. Having customer tastings, contests or new food pairing ideas also helps shoppers see or reacquaint themselves with products they’ve forgotten about. With 40,000 products in a typical grocer, the opportunities are nearly endless.

Promotions that feel customized to the consumer will always lead to higher returns simply because of the targeted nature of the discount. Couple the practice with loyalty programs to increase the perception of exclusivity and grow your core consumer loyalty along with their shopping baskets.

Do people respond to clearly contrived “events”? If there’s money in it for them, I guess. But what about the rest of us, who have to put up with an annoying clutter of ads for the likes of “National Taco Day”? I think, in the end, a sale is a sale … nothing much is gained by pretending there’s more to it.

Storytelling is an art and when done correctly, one can achieve the desired results. Retailers can use theme-based promotions and events to narrate precisely what they stand for and what values they hold. Doing so will also help retailers form a deeper and more lasting connection with their customers.

"This is a form of experiential retail in that it gives the consumer an 'outing' to go with the 'purchase.'"

"With the emergence of social commerce, adtech, and martech capabilities, special day-themed promotions are becoming the norm."