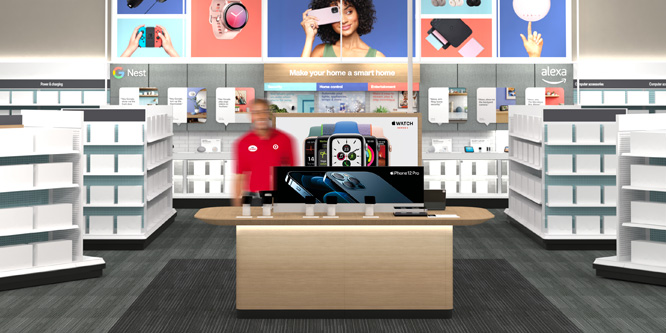 Target plans to more than double the number of Apple at Target shop-in-shop “experiences” from 17 stores to 36 in time for holiday selling.

The initial 17 shops debuted this spring and doubled Apple’s footprint in those stores while expanding offerings in its other locations and online. Each shop features updated lighting fixtures and displays as well as Apple-trained Target tech consultants.

The sections will stock the latest iPhone 13 Pro and Apple Watch Series 7 as well as AirPods, the HomePod mini, Apple TV and AppleCare for the holidays. Apple also gained standalone treatment on target.com with the launch.

“Guest response has been incredible since the first locations opened in February, and now even more guests can experience the Apple excitement. Best of all? The entire assortment is also available on target.com,” according to a company statement.

Target is conducting the expansion as unveils its Top Tech list for the holiday season that also includes items from LG, Sony and gaming brands.

In announcing its initial Apple in-store shop program in February, Target said it is aiming to be “the ultimate destination for the most sought-after national brands, alongside its stable of coveted owned brands.”

With Target’s more than 1,900 locations, 34 Apple shops inside Target remains a minor experiment for the tech giant. However, Target has long billed itself as an “upscale discounter” and the partnership enables Apple to explore sales and reach in a broader lifestyle setting than its own 270 stores across the U.S. as well as its in-store shops inside Best Buy.

Apple at Target is just one of a number of business-building moves the retailer has made in recent years. It has expanded its partnerships with “premium national brands,” also increasing in-store shops with Disney and Levi’s. In August, 100 Ulta Beauty shop-in-shops opened.

Target has also overhauled its private label mix, beginning in 2016 with the rollout of Cat & Jack and followed by dozens of others over the last five years. In the second quarter, owned brand sales outpaced the company’s 8.9 with growth in the mid-teens. Accelerated private label growth remains a priority with owned brands also packing a higher margin.

DISCUSSION QUESTIONS: Is the Apple at Target partnership a bigger deal for Apple or Target? How would you define success for each brand?

Please practice The RetailWire Golden Rule when submitting your comments.
Braintrust
"I like this partnership – I only hope that they can have knowledgeable people to help with Apple purchases."

This is good for both Target and Apple. Target continues to burnish their expansive brand offering, and Apple gets additional, significant distribution via Target stores. As technology continues to play a bigger role in our everyday lives, it makes sense that finding these products in a general merchandise stores make sense — Target is the right fit for Apple.

The Apple and Target partnership is a great deal for both Apple and Target. For Apple it expands the reach of physical stores, which is a great benefit to attract customers that prefer to purchase Apple products in person or want a local support option. For Target, the shop-in-shop Apple stores help elevate its brand and drive more traffic to its stores. This is another smart move by Target.

I visited one of these concepts in a Target store in Hew Hampshire. Although it is only a small part of the electronics offering, the concept provides an elevated experience in everything from merchandising to customer service. It was also notable that Target had upgraded non-Apple areas, such as TVs, with better fixtures and displays. The whole thing felt more like Best Buy than Target’s old electronics offering. However it is still a long way from being as good as Apple’s own shops. The one bad thing was the lack of stock and the gaps on fixtures – an age-old Target issue and one that has gotten worse with the supply chain challenges.

The Apple/Target partnership is a win-win for both retailers. Apple is an aspirational brand for many shoppers and Target is moving towards giving all their guests the best of the best under one roof. Target’s locations serve entire communities and this move will only expand Apple’s reach.

Both Target and Apple will benefit from the full-scale deployment (1,800 + stores to go…). Target will be able to draw a new type of customer. The advantage to Apple is less clear but no less probable. Apple will be able to present to customers have thus far not lived near an Apple store (there are 270+ in the U.S.). But the more subtle advantage for Apple is that Apple has a long-term strategy to introduce consumers to its brand, patiently but consistently, until they become new advocates for Apple.

I like this partnership – I only hope that they can have knowledgeable people to help with Apple purchases. I can tell you from experience that there has to be a commitment to the Apple ecosystem, so that means being able to answer questions from interested or current Apple customers.

This is a great indication of just how far Target has come. Some would call Apple a luxury or aspirational brand. And not so long ago some would have called Target a discount or opening price point department store. Target elevated its game and now further elevates it with the Apple shops. It’s unthinkable to say that Apple would consider opening shops in any of the mall anchor department stores. That they are doing it in Target speaks volumes.

Thirty-six stores out of the entire Target portfolio is not much, so both companies will want to maximize e-commerce visibility and sales. As the number of physical locations grows, it helps offset the growing number of freestanding Apple stores in some locations that are no longer as desirable as in the malls’ heydays.

The Apple/Target partnership is good for both companies. Apple gains access to another set of “upscale discount” consumers that visit Target stores and target.com. Target gains access to premium products such as iPhones, Apple Watches, AirPods, etc. Both companies will gain sales from the partnership, and each brand will enhance the consumer reach of the other.

Target is the clear winner here, in my opinion. Apple will certainly benefit from the added sales channels, but Target adds another stellar brand to their shop-in-shop strategy. They continue to make great decisions in becoming a true destination for their shoppers and, in the process, they are creating greater differentiation from Walmart. The shop-in-shop concepts generate new foot traffic combined with joint marketing investments that serve the brand well.

“[T]he ultimate destination for the most sought-after national brands, alongside its stable of coveted owned brands.” If I were a competitor with Target, that would scare me. I think there will be great strength in foot traffic that will prove that Target’s moves to these shop-in-shop experiences are a great addition. And it will definitely improve foot traffic throughout the stores.

Having Apple-trained consultants can also help boost foot traffic in Target’s stores. This is a huge win for Target heading into the holiday shopping season, and I expect Apple stores within Target will be successful during the back-to-school shopping season as well.

It’s a beneficial partnership for both companies – it will be interesting to see how this relationship expands and grows.

Target, based on its partnerships with Ulta, Disney, Levi’s, Apple, etc. is on its way to becoming a mall within a store driving experiential retailing. Apple, on the other hand, especially due to the pandemic, is losing its experiential touch within its own stores, oftentimes resulting in a lot of wait times. I think it just makes a lot of sense for Target to elevate their profile to attract more experience-seeking customers and for Apple to gain from that.

This is a win-win. Target carrying the Apple brand name enhances their messaging for upscale discounting. Apple finds another legit distributor for their product lines. Both could leverage a success KPI tied to sales plus market NPS or customer survey information highlighting market affluence, status or perception. However without full deployment the partnership will not move the needle much.

Although both companies win in this arrangement, Target benefits more just from the shear “halo” effect it will receive from Apple. Think overall store redesign as an example. The sharp, clean look in the Apple section will encourage and quite possibly necessitate redesign for other areas within the store.

Target has become the general merchandise retailer of choice, and having a branded customer-first shopping experience is another competitive differentiator. The sky is the limit for this new partnership, especially as Target has only started this pilot with Apple, with only 34 out of a possible 1,900 store locations. Target is exploring expanding its partnerships with Disney, Levi’s, and Ulta.

Good for Target and Apple, but I would say Target gains more than Apple. Apple has managed to go from Apple stores to driving a lot of business online, hence the overnight long lines for new releases at the Apple Stores are much less prevalent. The Target store footprint is good for Apple on the accessories front where you want to try and/or touch the merchandise or pick up a missing headphone or charger. Target gains foot traffic that they can cross sell other items and gain awareness to the Apple customer demographics.

Braintrust
"I like this partnership – I only hope that they can have knowledgeable people to help with Apple purchases."