Target succeeds by going big on convenience in small stores 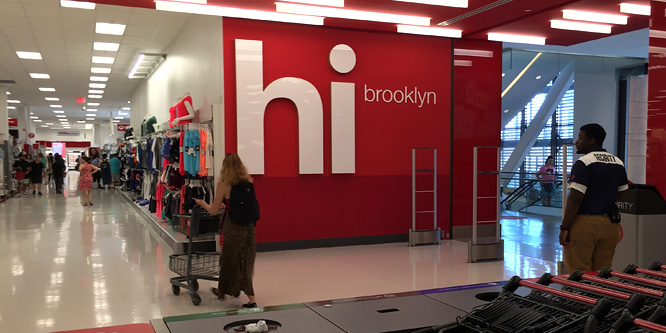 Target is pushing ahead with its plan to have around 130 small stores operating in communities around the U.S. by the end of 2019. This week, Target confirmed plans for four stores — three in New York City and one in Chicago — demonstrating that the retailer is planning to build its business around small boxes even further into the future.

The three stores planned in New York are located on the Upper Eastside of Manhattan, Astoria, Queens and on Staten Island, according to CNBC. The Manhattan store, which will open next year, will be the second smaller box the chain operates in the borough. It also has a store that sits across from Macy’s Herald Square flagship. The Queens location shows that Target is taking a long-range view with its smaller stores. The retailer plans to open the store by 2022.

Target’s planned Chicago store will be located in the city’s Logan Square neighborhood and cover 27,400-square-feet, according to a Chicago Tribune report. The store, which is scheduled to open in 2020, will be the tenth smaller format location for the retailer in the Chicagoland market.

The Tribune report points out that Target is clustering small stores in Chicago, with locations within a mile-and-a-half of one another. Target has identified college communities and densely populated urban neighborhoods as the ideal locations for its small stores.

“Part of joining a new community is being a good neighbor,” said Target CEO Brian Cornell on the chain’s fourth quarter earnings call last month (via Seeking Alpha). “So, our teams go deep into those neighborhoods to really know those guests and tailor the experience to what they need. It’s a capability we built and refined over time.”

Target’s emphasis on small stores is supported by the numbers. Research released last year by GlobalData Retail showed the small stores were more than twice as productive as Target’s big boxes.

DISCUSSION QUESTIONS: What role do you see small stores playing in Target’s strategic mix in the years to come? What do you think is behind Target’s success with its smaller footprint stores?

Please practice The RetailWire Golden Rule when submitting your comments.
Braintrust
"I like everything about this small store strategy except the higher pricing. It seems so NOT neighborly and community-focused..."

"There’s also a strong argument to say that the endless aisle that e-commerce enables means you don’t need a big store to display everything."

"Smaller formats that encourage customers to drop in, while increasing online sales, in-store pickup add-on sales and impulse buys. What’s not to love?"

I see smaller stores as the way to go not just for Target but most retailers. As we move forward with faster home delivery, the store will remain the place to see and touch the item, purchase it and pay for it but instead of bringing it home, it will probably be waiting for us by the time we get back. Smaller stores mean lower rent and a lot less inventory, because of the fast home delivery. These savings will help retailers immensely. With this concept, the in-store experience has to become one for browsing and seeing with excellent customer service for recommendations and assistance. The retail store of the future will still be a great place to shop. Target is on track and heading in that direction. Watch how other retailers will soon follow.

I am not a big fan of Target’s silver bullet initiatives, but I like this one a lot for exactly the reasons that Art highlights.

It is a smart play. We already know that physical stores in a geographic area work to boost online ordering in addition to in-store orders. So having more small format stores and leveraging omnichannel services is definitely the way to go. Smaller formats that encourage customers to drop in, while increasing online sales, in-store pickup add-on sales and impulse buying. What’s not to love?

The smaller stores which Target is rolling out are proving to be highly effective with productivity more than double that of larger stores. For those that have been open for some time, sales growth is near double digits.

The reason for the success: the high population density in most of the locations helps drive traffic; visits tend to be mission-focused so conversion is higher; stores are more conducive to browsing which increases average transaction value; and, the formats showcase Target’s latest thinking in terms of design, layout and merchandising.

Small stores aren’t perfect, however. missed opportunities abound. There are no quick meal suggestions in food; and no meal kits — which are becoming far more popular. Home departments are devoid of inspiration and ideas — and are still displayed on dull supermarket-style shelving.

I like everything about this small store strategy except the higher pricing. It seems so NOT neighborly and community-focused, given that the residents of the urban neighborhoods can just as easily shop online. Why bite the hand that feeds you?

The ongoing gentrification of urban areas provides a ready base of upper middle class consumers for smaller store versions of big box retailers, even if the prices are a bit higher. If the right mix of products and variety are selected for these smaller formats, it is pure math that will make them much more profitable than their larger, more inefficient counterparts. The question remains as to how successful these smaller formats will be outside areas of densely populated affluence. All in all, a good move that bodes well for the future for Target and other retailers like them as they strive to remain a relevant force in the marketplace.

There’s so many benefits to small-format stores that I’m not surprised that Target is seeing success. Reduced rent and overheads, more flexibility as to location which means you can really target your audience by going to them rather than expecting them to come to your big store, retaining the marketing value that physical stores have and having a physical hub to use in conjunction with your online business. There’s also a strong argument to say that the endless aisle that e-commerce enables means you don’t need a big store to display everything. You can offer customers a huge product range from a small space by letting them order online and pick up in-store, or order from staff in-store for delivery at home, with a range of core products available for people to drop in and buy on the spot. It’s not a complicated strategy, but Target have done a great job of executing it. I also like the idea that the stores aren’t all going to be homogeneous, but tailored to their local audience.

The focus on convenience comes front and center here. Target is taking their stores to the people, in their communities. And the stores will be tailored to the community they are serving. Great way to expand the connection customers have with the Target brand.

As options have become more abundant, anxiety has only increased in department stores. I love that these small format concepts force retailers to better curate their products and retail story to better serve their customers.

To bring another point into the discussion, Target is also betting on a long-term play with college students who tend to have a higher LTV than other shoppers when exposed to the retailer early on in their purchase behavior. Not to mention, they tend to migrate to urban areas so will literally “grow with the store” as their income levels change. Smart move.

Smaller store footprints make it possible to open stores in urban locations and smaller neighborhoods that can’t support a full-size store. It also requires less capital and with the right assortments of fast moving items, the sales per square foot can easily exceed a large store’s metrics.

Many chains like Target have already located stores in the easy locations, but as they move into urban areas where real estate is harder to come by and locations are not cookie-cutter, they need to look at the organization structure, the footprint, and the processes as well as the technology.

I’ve said before and will continue to say until I see compelling evidence otherwise: if Target’s success depends on small stores, they’re in trouble. The numbers simply aren’t there store count wise to make up for poor performance in their traditional formats. I won’t say “don’t do it,” but I will say “don’t do it unless you’ve fixed the leaks in the main fleet.”

The supply of retail real estate in this country is out of balance & that’s putting it mildly. Target isn’t the only retailer beginning to change its strategy to smaller footprints and leases. The cost of overhead is having a huge impact on retailers. To help overcome this, many of them are beginning to use their stores for a wider variety of functions, from sales to distribution centers for a better customer experience and to get the most bang for their buck, e.g. omnichannel solutions.

Braintrust
"I like everything about this small store strategy except the higher pricing. It seems so NOT neighborly and community-focused..."

"There’s also a strong argument to say that the endless aisle that e-commerce enables means you don’t need a big store to display everything."

"Smaller formats that encourage customers to drop in, while increasing online sales, in-store pickup add-on sales and impulse buys. What’s not to love?"