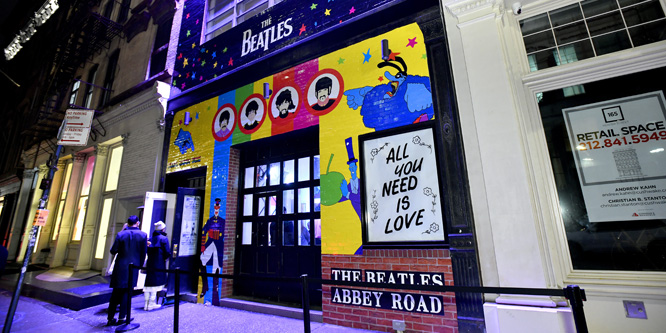 Fifty-five years after their legendary performance at the Ed Sullivan Theater, The Beatles have come back to New York as a holiday pop-up.

Running from Dec. 11 to 22 in the SoHo district of Manhattan, the store features “the first wave of products” since Sony Music took over the licensing rights for Beatles merchandise in North America.

The façade of the building is wrapped in imagery from the “Yellow Submarine” movie alongside an “All You Need I Love” poster. The inside features a Beatles drum kit, a gift wrap station called Help!, Beatles videos and a red London phone booth. Visitors can snap photos of themselves in front of floor-to-ceiling “Yellow Submarine” and “Sgt. Pepper’s Lonely Hearts Club Band” album cover backdrops.

“We don’t really do pop-up shops. It’s the first in the U.S.,” Paul Cole, merchandising and licensing director of Apple Corps Ltd., the holder of the band’s licensing rights, told Women’s Wear Daily. “The clothing looks fresh. It’s fun and appeals to a good, wide range of fans.”

Merchandise will also be available at usastore.thebeatles.com.

Numerous retailers and brands have come to SoHo with holiday pop-ups, including Kohl’s, Tupperware, Lord & Taylor, Ugg and Amazon.

Nostalgia has long been a strong trend. A Blockbuster holiday pop-up was just opened by a streetwear designer in SoHo selling Blockbuster-themed items such as  t-shirts, sweatshirts, backpacks, coffee mugs and totes, many of which play up the “Be Kind, Rewind” mantra. Fila, Wrangler and Long Island Ice Tea have also recently opened nostalgia-themed pop-ups.

Another hot nostalgia trend being seen celebrates TV shows, such as Friends and Seinfeld. The marketers charge a fee to experience show-related trivia games, set re-creations, props and photo-ops, while adding an extensive merchandise component. Pop-up restaurants have opened around Beverly Hills 90210, Saved by the Bell and Breaking Bad.

DISCUSSION QUESTIONS: Will Sony’s Beatle’s-themed pop-up offer much appeal? Would nostalgia-themed pop-ups work for other entertainment properties? What are the limits or challenges to such concepts?

Please practice The RetailWire Golden Rule when submitting your comments.
Braintrust
"Nostalgia always seems to be a draw and certainly Beatles-themed items are still in demand so it seems like a win-win."

"The Beatles have proven to be timeless and with with such a short window as a pop-up, I imagine it will do quite well."

"Funny: in our podcast (WDcast), I asked a Millennial what they thought of the term, “OK Boomer” and she said, “Prince! Why are you Boomers so obsessed with the Beatles?"

20 Comments on "The Beatles Play SoHo"

Some time ago on a conference trip to Las Vegas, I saw that they were going to do a Vegas show on the Beatles. I thought there was no way people would see that now in this age but as I talked to more people that I knew, I found that this show had become a destination when in Las Vegas. I think this will work especially in NYC – nostalgia is always a good thing and to most people, it brings a positive memory to them.

Did you go? It’s really good!

I loved that show too, Georganne – and I am not even a huge Cirque fan!

Exactly. Nostalgia is in right now, especially around the holiday season. If anything else, it increases awareness of a classic intellectual property by Sony, and tests interest in licensing for something else (Broadway shows for example) down the road. Pop-ups are the most efficient way to do that.

Funny: in our podcast (WDcast), I asked a Millennial what they thought of the term, “OK Boomer” and she said, “Prince! Why are you Boomers so obsessed with the Beatles? Prince was five times as good!” That was an epiphany for me. When you think about it, she was right!

Nostalgia stores like this in tourist areas are really a very limited proposition. Besides most of this stuff, or better, I can get online. Why wouldn’t I just do that? Unless by chance I pass one of these. P.S.: is there going to be a Prince store soon?

Given he died without a will and the estate is still being fought over by his children, gonna be a while.

The Beatles have crossed all generations. While some younger generations can’t come up with the names of The Beatles, they know their music. The percentage of the population that knows and enjoys The Beatles’ music is HUGE (worldwide, not just in the U.S./U.K.). This could do very well because it’s The Beatles, but recognize that few brands, artists, rockstars, etc. have this much “recognition longevity.”

I admit I’m showing my age, but the Beatles aren’t a “nostalgia act.” Yes, for people of a certain generation like me, the Beatles Channel on satellite radio is our go-to music — but there is also a reason why my adult children are hooked, why my Millennial son collects Beatles vinyl, and why the crowd at the McCartney show I attended this summer crossed at least three generations.

So a simple answer to Tom’s question about the pop-up: Absolutely huge appeal, and anything less than a big success would be a surprise. As songwriters/musicians, and as a cultural phenomenon, the Beatles have no equal.

This pop-up seems more about the merchandise than the experience. I’m not sure how appealing it will be for mission-driven shoppers in Soho during the holiday season. Tourists may wander in, but I’m not sure that will translate to sales. And I’m skeptical that Beatles aficionados will brave the madness of the neighborhood just to see the goods. That said, the temporary shop seems like a suitable way garner some buzz.

Nostalgia always seems to be a draw and certainly Beatles-themed items are still in demand so it seems like a win-win. Nostalgia-themed pop-ups offering merchandise plus an experience based on the theme are a great way to tie in to the theater of shopping and offer entertainment to customers.

Pop-up shops have a well-established track record of enhancing and expanding brand equity. As the article indicates, SoHo is a hot spot for pop-ups, so who knows? Maybe giving all those SoHo hipsters a fresh way to experience The Beatles could start the Fab Four on a long and winding road to renewed cultural relevance.

Beatlemania is alive and well, every generation loves The Beatles. The attention to detail in this pop-up promises an immersive experience – you don’t see too many wrapped buildings. It will be a hit.

I like the nostalgia factor of some of the other pop-ups, too. I was never Friends obsessed but I took a selfie on an orange couch at a Central Perk pop-up in Chicago. Why? Because it was fun, and that’s the point, isn’t it?

As a profoundly Beatle-influenced human, I heartily endorse this pop-up store. It’s a niche, for sure, but one with great nostalgia. I forecast a moderate-to-strong success.

While I’m less excited about pop-ups showcasing TV series, the pop-up format is well-suited for this type of ephemeral merchandising. Most will be gone before the brand fatigue sets in, while the rabid fans will take pride in their limited-edition mugs and t-shirts.

Soho is currently packed with tourists and I am sure many of them are Beatles fans. If successful, I see no reason why they wouldn’t take the pop-up shop “on tour” and hit other markets. I say give the experience to all the Beatles fans – not just those located in NYC!

The Beatles have proven to be timeless and with with such a short window as a pop-up, I imagine it will do quite well. For this concept to work for other nostalgia-based band or entertainment brands, I think they would have to be at the same scale as The Beatles (e.g. Star Wars).

People are still listening to Beatles music from 50 years ago. When I was growing up, if I’d been listening to 50-year-old music, I’d have been listening to A Bicycle Built for Two and Al Jolson songs. The Beatles changed everything, and I’m not surprised that this store is a hit.

Curious to see what the actual shopper demographic ends up being for this shop. Will the “vintage”/”old-school” draw (or whatever moniker we think up next) appeal to young shoppers?

Hey, I thought all you need is love, not an inflatable Christmas Ringo to put on the front lawn. I mean, she loves you yeah, yeah, but come together, this looks like too much either too soon or too late. We may all live in a yellow submarine, but do we want to buy one? Seriously, there has always been a collector’s market for Beatles merchandise, but collectors like authentic, original pieces. How relevant are The Beatles for today’s shoppers? I don’t know, how relevant were the Andrews Sisters to the older end of the BrainTrust continuum? The obvious target consumer market is nostalgic Boomers, but while I feel fine eight days a week, even I’d have trouble selling this ticket to ride. Sixties nostalgia? Maybe. Youth fashion is always looking backwards, but we are talking something very, very specific here. Given the limits of the market it will take more than one hard day’s night to sell this at scale. Hey, but anything can happen. Just yesterday Eleanor Rigby came in through the bathroom… Read more »
1
|
0
-   Share

So Ryan, you’re not impressed. You say you want a revolution? Well, you know, we all want to change the world. Goo goo g’joob.

Likely this is a great holiday revenues boost as well as some good promotion for these materials which will boost their web sales.

Sounds more like a tourist and enthusiast shop to me, though, than any place I’d seek out. We already have 50 years of memorabilia. Do we really need this much more?

Braintrust
"Nostalgia always seems to be a draw and certainly Beatles-themed items are still in demand so it seems like a win-win."

"The Beatles have proven to be timeless and with with such a short window as a pop-up, I imagine it will do quite well."

"Funny: in our podcast (WDcast), I asked a Millennial what they thought of the term, “OK Boomer” and she said, “Prince! Why are you Boomers so obsessed with the Beatles?"