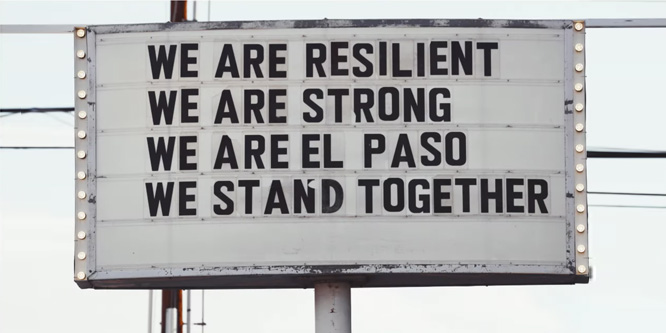 With less than one week until Christmas and a busy shopping weekend ahead, retailers are looking to drive traffic to stores and websites with discounts as well as offers of last-minute help. Often the latter is coming in the form of shipping and pickup services for those who have procrastinated in buying gifts or just aren’t quite ready for company.

While many (most) of the commercials currently airing online and on television are more sales promotion focused, we chose to include spots released near the beginning of the Christmas selling season that include broader (you’ll decide how much) themes.

This week’s RetailWire Christmas Commercial pits rivals Target and Walmart against each other.

Target’s “Thinking of You” tries to connect the many ways the retailer can help its “guests” enjoy the holiday season.

Walmart’s “Live Better. Together.” commercial touches on a broader, optimistic theme, despite the many non-retailing challenges that the chain and America have faced in 2019.

Will it be Target or Walmart joining Big Lots, Etsy, Macy’s and TJX Cos. in this year’s final? That decision is up to you.

DISCUSSION QUESTIONS: What are your critiques of the Christmas spots from Target and Walmart? Which retailer does a better job of connecting with its core customers while reaching out to new shoppers with its holiday commercial?

Please practice The RetailWire Golden Rule when submitting your comments.
Braintrust
"I love the Walmart focus on unity however it could be played any time of year. Target, on the other hand, showed me what I can buy there. Gave me some ideas, made it seem fun."

"The somber twist with Walmart is a little depressing for me. I love the inclusion of seemingly real people, but ultimately it’s a bit TOO real."

"Walmart makes me feel like not spending and instead volunteering my time in my community. Which is great but I doubt that is their goal."

24 Comments on "The RetailWire Christmas Commercial Challenge: Target vs. Walmart"

Both great, but to me the Walmart ad takes a lot of cakes, given what’s happened in some of their stores (El Paso). Their message of unity certainly resonates now and especially this time of year, good for them.

Having said that, you have to give it to both Target and Apple for their music selection (or ability to pay high ticket to ASCAP). The Donna Summers (!) ear worm is also about at good as it gets, and the message is terrific, just a little lighter than Wally.

Target’s spot is a lot of fun and very upbeat. I like the fact that it showcases various holiday solutions and products for a whole lot of different people and situations. The music is great and matches Target’s radio spots, so will help create an association with the company.

Walmart’s is a much more poignant piece. Admittedly it is not overly holiday focused and the attention is more on people than products. It also lacks an element of cheer – I wanted the music to really ‘get going’ and it never did!

On balance, my vote goes to Walmart. The advertisement is memorable and it made me think. Plus the message of unity is one we desperately need this holiday season.

This would have been a tough choice three weeks ago. Both commercials talk about family and the values of the season and beyond. But since it’s six days to Christmas and counting, my vote goes to Target. It’s very clear in its obvious message as a Christmas season solutions headquarters.

Agreed, the Walmart commercial quickly lost my attention. It sounded like an HR commercial and not customer-focused.

Enough of the heavy messages! Can’t we have a little fun at the holidays – please? Target gets it.

I agree, Walmart makes me feel like not spending and instead volunteering my time in my community. Which is great but I doubt that is their goal.

Wow. What a couple of heart connecting spots that don’t try to sell you something. The Target ad was very upbeat and the Walmart ad was very emotionally connected. Both do a terrific job reinforcing their respective brand images and connecting to customers, new and old. The tie-breaker is memorability and that goes to Walmart. Kudos to both retailers. In today’s world these ads are really needed.

Of all the holiday ad challenges, this one was the toughest decision for me. Both ads resonated with me and, more importantly, I think both will resonate with their target audiences. I suppose I connect more with the cleverness of the Target ad versus the emotions of the Walmart ad, so I cast my vote with Target.

The Walmart message has relevance but is heavy. The Target commercial is fun, the message of their offerings is clear, it’s bright, the Target dog is there and the music fits. My vote is for Target.

I understand why Walmart went the direction they did, but I got a feeling of family, unity and love with the Target ad as well and it felt much lighter. Plus the vibrant music and colors made it fun! Target it is!

I love the Walmart focus on unity however it could be played any time of year. Target, on the other hand, showed me what I can buy there. Gave me some ideas, made it seem fun. Reminded me of the joy of the holidays. My 2 cents says Target.

Both spots are great in their own way. Target’s messaging is right in line with what you expect from the brand, yet colorfully amped up for the holidays. Walmart’s is much more unexpected and daring in its use of heavier emotional tone, empathy, thoughtfulness, connectedness — a message you wouldn’t expect from the brand, yet appropriate for the season. For this reason, my nod goes to Walmart.

Both are heartstring tugging. But Target’s is far better constructed as advertising and wins out in this competition.

Walmart takes on far too much to mix the emotion of the Christmas season with trying to resolve our political differences — or at least make them acceptable.

Target tells us what it’s about from the front and keeps the fun, high energy going throughout. It works and works well.

That said, if I have to hear one more ad “for the…” I think I’m going to swear off media for the remainder of my life. It’s an ancient, stale voice approach and their agency should be ashamed. Doesn’t stop the ad from working — but it also doesn’t do quite as much for them as it should.

Both did a great job communicating their message to us. They were two of the better ones this season, along with the commercial with the young boy in the hardware store which was terrific. Both were not too long, so they did not lose our attention. They sent separate messages and both were to the point. My vote goes to Target.

They’re pretty similar in a way, with their “we see you” messaging. Both use popular, nostalgic music. I agree with what others have said. The somber twist with Walmart is a little depressing for me. I love the inclusion of seemingly real people, but ultimately it’s a bit TOO real. In the end, I prefer Target’s escapist fantasy.

This is tough because I like them both! The Target commercial is fun, but it still manages to sell merchandise. So even though Target is thinking of us, it doesn’t want us to forget that there are loads of gift items packing the aisles.

I like the Walmart commercial for a completely different reason, particularly because it backs off of everything except to say we see you and you’re important. Walmart wins for me.

I’d go with Target as being more in the spirit of the holiday season – like Lee Kent says, Walmart’s ad could have been shown any time. And one quibble for Target – couldn’t you throw in one menorah scene?

My vote goes to Walmart for capturing the essence of what we should be focusing on during the holiday season — being kind to each other, taking care of those who need it, building community, and standing strong — together — in the face of crisis. The Target add is slick, but I already knew they wanted me to buy lots of stuff.

I give the nod to Target — more of a cheery message about bringing joy to your holiday season by bringing the family together. Plus, as an ad, it’s just brighter, and the production feels higher quality. Walmart, while doing a great job pulling at heartstrings, does feel like it could have been done at any time of year, and while it may make you feel good, it doesn’t make you feel like going to Walmart to shop right now. Target wins this one for me.

Both have great messages. Walmart for any time of the year while Target’s focused on the holiday season. I have to give the nod to Target.

At the risk of proving Charlie Brown right, I think I prefer the “commercialized Christmas” of the Target ad over Walmart. The latter was probably more in the (right) spirit, but I found it so understated as to be almost depressing (it also had a barely discernible audio … though not sure if that’s the case when actually heard on TV).

I think Target’s ad was thoroughly in keeping with their image — trendy. I loved that little robotic whatever! But TBO, neither ad overwhelmed me.

Both are heartwarming ads. Walmart’s has a heavy family message that would work anytime it is played — kudos for Walmart for its message. The Target ad is light and highlights the holiday season getting viewers into the mood of shopping. My vote goes to Target.

Walmart presents an inclusion message, which is nice, but it is only a part of Christmas. Target shows many elements link with products they sell. The stronger Christmas message is Target

Braintrust
"I love the Walmart focus on unity however it could be played any time of year. Target, on the other hand, showed me what I can buy there. Gave me some ideas, made it seem fun."

"The somber twist with Walmart is a little depressing for me. I love the inclusion of seemingly real people, but ultimately it’s a bit TOO real."

"Walmart makes me feel like not spending and instead volunteering my time in my community. Which is great but I doubt that is their goal."