Trump is deaf to retailers on tariffs 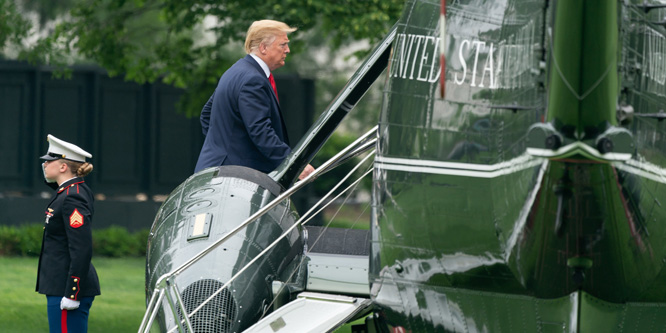 The Trump administration has increased tariffs on about $200 billion worth of goods imported from China after trade talks between the U.S. and the Asian nation failed to reach an agreement. The government in Beijing has said it will retaliate against the punitive action against the U.S.

The decision to go ahead with the tariff increase follows a campaign by retailers and others to convince Mr. Trump that a trade war with China is paid for by American consumers and businesses. That campaign, however, has fallen on deaf ears.

“I’m different than a lot of people,” Mr. Trump said. “I happen to think the tariffs for our country are very powerful.”

A report by the Trade Partnership released on February estimated that tariffs on all Chinese imports could lead to a loss of up to one million jobs in the U.S. Earlier this week, Mr. Trump threatened to impose tariffs on about $325 billion of Chinese imports that currently do not have tariffs attached to them.

“We want to see meaningful changes in China’s trade practices, but it makes no sense to punish Americans as a negotiating tactic,” said David French, senior vice president for government relations at the National Retail Federation, in a recent statement. “If the administration wants to put more pressure on China, it should form a multinational coalition with our allies who share our concerns.”

The Retail Industry Leaders Association also issued a statement earlier this week on the topic. “Tariffs are taxes American families pay — $24 billion and counting. Raising tariffs means raising taxes on millions of American families and inviting further retaliation on American farmers which jeopardizes domestic jobs. We want President Trump to successfully reach a deal with China that puts a check on anti-competitive behavior. But a deal that increases tariffs on everyday goods will be a loser for middle class families.”

DISCUSSION QUESTIONS: What more can the retail industry do since lobbying efforts to date have failed to convince Donald Trump of the impact that import tariffs have on American consumers and businesses? Will a continuing impasse with China over trade significantly hurt the U.S. economy?

Please practice The RetailWire Golden Rule when submitting your comments.
Braintrust
" Let’s hope that this doesn’t last too long."

"It is no surprise that the Retail Industry Leaders Association opposes the tariffs and predicts apocalypse. But that seldom happens in practice."

"Tariffs would be more effective as a protectionist measure for domestic industries if those industries actually existed. "

14 Comments on "Trump is deaf to retailers on tariffs"

I’m not sure the NRF or any other lobbying group can move the needle at this point, as long as President Trump continues to mischaracterize the impact of tariffs on U.S. importers and consumers rather than China itself. Whether he really believes this narrative or uses it for politically motivated spin is a conversation for another day or a different platform.

Tariffs generally defend primary producers and raw materials from cheaper foreign alternatives. The cost difference is typically labor. The beneficiaries of those lower priced primary products are generally manufacturers and retailers — they sell the resulting cheaper end products. Someone’s ox always gets gored. In this case, it is no surprise that the Retail Industry Leaders Association opposes the tariffs and predicts apocalypse. But that seldom happens in practice. Not to get too wonky — but a leading options analyst posted his simulations of the options markets implied predictions of the U.S. economy (expressed as the predicted end-of-year prices for broad market indexes like QQQ) on Seeking Alpha yesterday. He compared the predictions of the markets from Monday (pre-tariff announcements) to Tuesday (post). The outcomes were imperceptibly different at year end. In other words, the financial markets think the net impact will be zero. I agree.

Tariffs would be more effective as a protectionist measure for domestic industries if those industries actually existed. The reality is that wide swathes of retail-centric industries (apparel, footwear, accessories) fled the U.S. a long time ago — yes, for the labor/cost savings that you describe. But the horse is out of the barn, and at this point the tariffs cause havoc with existing supply chains and manufacturing “ecosystems,” not just with the prices that consumers pay.

Great analysis, Ben. I also agree that by looking at the huge market the U.S. represents ($ trillions) versus the impact of the tariffs, they become little more than a drop in the bucket. Net zero impact on the financial markets, for sure.

Sadly, I doubt there is anything any trade group can do at this point to change the President’s mind on tariffs. I suppose it’s easy for millionaires and billionaires to believe there is no impact on consumers when you don’t have to care about prices going up on everyday goods your family needs. I have already seen numerous news stories this morning alone from U.S. manufacturers talking about layoffs in the thousands of employees due to tariffs, especially in materials such as steel. The impact is clear and unfortunately stands to cause more harm than good if the disputes are not resolved soon. Whether the President truly believes the false narrative or is just using it to gain favor with a political base remains to be seen. Let’s hope that this doesn’t last too long.

I agree Camille. Possibly the only way his mind can be changed is if it starts to have a negative effect on retailers renting space in his properties; and his rental income suffers.

I do not agree with tariffs, I think they are damaging for the economy and, ultimately, for consumers. I prefer free and open trade. However, President Trump – regardless of what one thinks of him – does have a point: trade with China is not particularly free and it is not all that fair. The abuse of intellectual property rights in China is shocking and causes economic damage to many firms. China is extremely protectionist in terms of imports and imposes very high tariffs on products from the U.S. and other nations. And there are severe investment restrictions on foreign ownership of Chinese firms which do not apply to Chinese companies looking to set up in the U.S. China has been intransigent on all of these issues. President Trump is trying to get China to change these policies and is, in Trump style, playing hardball. Whether that is right is open to question, but there is a basis for action and this is not just a petty policy that has no reasoning behind it. All… Read more »
11
|
0
-   Share

Good analysis, Neil. The US position is rational, consistent, and resolute. The points you make are around winning the long game rather than winning the next general election.

It would be a mistake to let the chaos of today’s politics cause us to consent to continuing intellectual property abuse and ignore the past lessons on China’s exceptional ability to introduce bureaucratic delay.
There is still time for negotiators to make progress. Exports on the water that left China ports before today are exempt from the tariffs. That gives a couple of weeks for agreement to be reached.

I don’t want to start a political debate, but here are the facts. First, the President has built his entire business career on incurring debt, taking losses and using the tax loss carry forwards as a way to leverage more capital which, in his case, generally creates more debt. Second, his view of economics has a sort of a zero sum, who-beats-who tinge. As far as I can make sense out of his Tweets and public pronouncements — and that is admittedly limited — he seems to view trade in totally binary terms, i.e., there is a fixed pot of profit out there so if I’m operating at a deficit, that’s bad, and if I am spending less than I’m taking in that’s good. The only problem, of course, is that trade doesn’t work like that, and that sustainable economic growth and market development is a long term process, not a series of one off deals. But given how he sees things, neither the NRF, the Republican Party, nor anyone else is going to change… Read more »
6
|
-4
-   Share

The economic devastation wreaked by this tariff policy is serious. But we will continue to only hear the deeper stories behind closed doors — because what company wants to reveal the serious ways in which their business is declining because of the tariffs? Merely discussing it could send that decline into a more rapid phase.

China has NOT been a fair trade partner in the past. The government of China has subsidized companies in order to steal business and put some American workers out of jobs. BUT… Responding in kind is never effective. We need far more creative responses than those put forth by Mr. Trump’s narrow minded advisors.

It’s very disruptive because it adds a large amount of uncertainty into business, which is never a good thing. For example, companies that pay commissions — obviously commonplace in retail — having been faced with a 25% (or whatever) increase overnight are likely to raise prices: so do salespersons enjoy the resultant windfall, or should commission structures be reworked? Or what if prices are raised and sales tank … should those same people then suffer? So a lot of time will be spent unproductively dealing with this … something perhaps not appreciated by those who bluster notwithstanding, don’t deal with day-to-day issues.

We need patience, as China and other countries have had the upper hand in trade with us for many many years, and no other leader had the guts to make a stand until now.

This is a high stakes game of chicken, and some sacrifice for a much better deal is needed, and I’m sure many of you will disagree. Trump is unlike anyone in my lifetime, and the economic turnaround has been very good so far. We have a businessman engaging with world leaders who cannot bully him, and he won’t cave in to the whims of our elitist entrenched leaders on both sides who want to contain and control the outcome, to maintain their own personal power.

I hope for our nation this gets worked out favorably, as years of abuse from China and others will not get fixed overnight. Have a great weekend everyone!

The business of retail is to buy and sell product for a profit. This is necessary for survival and growth in any and all political climates. Previous retail leadership withstood the tumultuous challenges of political upheaval simply by enforcing an apolitical approach to the market.

There are no political changes to the market that will cause the demise of retail. We are much more subject to the effects of product obsolescence, market rejection and the weather. Consumers simply consume at current market threshold price conditioning. Our stores and warehouses are packed with low price stuff that is a challenge to turn like never before. This is the issue we need to address no matter the prevailing political winds.

Let’s fix the problems we face instead of inventing new ones and predicting the future.

Braintrust
" Let’s hope that this doesn’t last too long."

"It is no surprise that the Retail Industry Leaders Association opposes the tariffs and predicts apocalypse. But that seldom happens in practice."

"Tariffs would be more effective as a protectionist measure for domestic industries if those industries actually existed. "