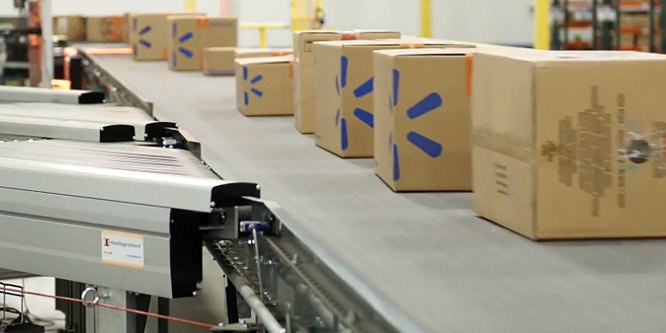 As the world’s largest retailer, Walmart is unwilling to cede the day to Amazon.com, even if it is the e-tail giant’s own Prime Day. That’s why, Walmart announced it is offering shoppers free shipping for five days, beginning yesterday, on all orders placed on Walmart.com, with no minimum purchase requirement.

The chain also announced price cuts on a small number of products, including a half-off deal on a Samsung 55-inch 4K television. Walmart spokespeople were quick to point out to the media that its low prices are not confined to a single day, but can be enjoyed by consumers all year long.

The special offers made this week follow Walmart’s June 29 announcement that it is offering a free 30-day trial of ShippingPass, which promises two-day shipping all year round with an annual subscription of $49, roughly half what Amazon charges for its Prime program.

Walmart, according to Reuters, is taking its recent actions against the backdrop of slowing online sales for the company. Sales made through the company’s website and mobile app increased seven percent in the last quarter, down significantly from the 17 percent increase it posted during the same quarter in 2015.

DISCUSSION QUESTIONS: Where do you think Amazon.com ranks as a competitor in the minds of Walmart management? Is Walmart allowing Amazon to take the oxygen out of the room by responding to Prime Day rather than creating a unique event of its own that forces others to react?

Please practice The RetailWire Golden Rule when submitting your comments.
Braintrust
"With its aggressive response to Prime Day, Walmart keeps itself in the game as a legitimate online alternative to Amazon."

"...in the end Amazon will win because free shipping is just one part of the Prime membership."

"Chasing Amazon can consume untold resources — and has drawn retailers away from focusing on their strength: their stores."

Amazon is just doing everything right. Now Walmart is playing catch-up, an unfamiliar and uncomfortable place.

Walmart is highly focused on Amazon as a competitor and is smart to respond to Prime Day with some aggressive promotions of its own. While it will never have the “cool factor” of Amazon, Walmart has the attention of a large segment of shoppers.

In the e-commerce space, Walmart is clearly behind Amazon and in no position to lead the industry with a unique event. Instead, with its aggressive response to Prime Day, Walmart keeps itself in the game as a legitimate online alternative to Amazon.

From a brand perspective, Walmart needs to aggressively defend its position as the low cost provider. So it makes sense for Walmart to counter any Prime Day announcement from Amazon with an offer of its own. However, is price the driving motivator behind Amazon’s success? I don’t think so. Amazon owns the retail ideas of breadth of selection and ease of use. Shoppers turn to Amazon because its e-commerce site is simple to navigate, familiar and fast. This IS Amazon’s business. So if you are shopping specifically for a 4K 55inch TV, Walmart will get a bump in traffic but its e-commerce site is slower, more complicated and designed to cross pollinate purchase with other store items. It is just not a simple and easy as any Amazon Prime purchase. It is the correct strategy for Walmart to contest the online dominance of Amazon but they still have to defend their brick-and-mortar footprint. Amazon has no such convention to bind it. The winner? Amazon by a mile. Prime is a great sub-brand that includes an… Read more »
3
|
-1
-   Share

Walmart’s primary competitor is Amazon. Only Amazon can best Walmart in selection, price, logistics and customer service. I don’t think Walmart’s offer takes any oxygen out of the room for Prime Day, but I salute Walmart for reminding Amazon that a big competitor is lurking nearby.

Amazon ranks at the top of competitors not just for Walmart but for most retailers. Or at least it should. Cheap stuff and free shipping at Walmart is still not going to compare to the consistently great customer experience at Amazon. And the Amazon experience — with Prime shipping, including same-day delivery in some markets — blows away walking into any Walmart door.

One area where Walmart might win this week is on out-of-stocks at Amazon where the shopper then finds the goods at Walmart. This could be a win both for shoppers and vendors. This morning I did a search for memory foam mattresses for Prime Day and the search results displayed three sponsored items that the vendor had paid Amazon to promote, and all three were sold out, yet the vendor obviously still had to pay — and waste — these marketing dollars.

For branded product that can be “safely” bought anywhere Amazon has an edge as it just works so well, and the buying process is so easy (as is the return process) but price can be the definitive decision maker. If Walmart can serve it up faster and cheaper then over time they will win share as well.

Prime Day is a successful public relations vehicle. Retailers who want to counter it would be smart to come up with their own publicity stunts rather than aping Amazon’s moves.

Walmart employed a similar tactic last year, offering price rollbacks and free shipping on Amazon’s Prime Day. Sales on that day, July 14, for Walmart were up 3.5 times the average July day. So it seemed to have worked for Walmart. Of course, Amazon’s sales dwarfed Walmart’s — Walmart.com sales represented just 3 percent of Amazon’s on Prime Day (in the U.S.). Walmart has no choice but to draft off of Amazon where it can (for example, copying tactics that work, like Prime and Prime Day promotions). But Walmart isn’t going to take a lead online until it starts to innovate far more aggressively than it is today.

I think Walmart needs to do both — compete with Amazon on Prime Day and create its own unique events/promotions that will resonate with its most loyal shoppers. But … I read recently that Prime members may be wealthier than the average citizen. That could mean that Walmart and Prime aren’t really targeting the same shoppers, so maybe it’s a waste of time, money and effort for Walmart to try to lure non-customers away, especially on this highly-promoted event day.

Amazon clearly leads online shopping versus Walmart, who quite obviously views them as a competitor. I don’t think Walmart’s offer takes anything away from Amazon’s Prime Day … after all, they created the event so Walmart’s offer looks more like a “me too.” Nonetheless, it’s critical that Walmart stay in the game with their own effort.

Amazon is a bad distraction for a retailer. Chasing Amazon can consume untold resources — and has drawn retailers away from focusing on their strength: their stores. Amazon is a solid niche competitor that has stolen book revenue, mail order revenue, and some retail revenue, but I no longer think it will ever be more than that. I have been writing a blog post trying to deconstruct the numbers Amazon never releases in order to look at how much they compete with retail. Those numbers are far smaller than Amazon PR implies. What’s particularly shocking is that Walmart put all this effort into chasing a competitor who is not profitable in their retail business. Their other businesses are supplying the profit while they continue their 20 year tradition of using investor money to buy customers. Last quarter over 60% of Amazon profit came from cloud services — just 10% of their business. That’s particularly out of whack. I’m certainly not “anti-Amazon” (my wife’s a Prime member and I order quite a few things in smiling… Read more »
1
|
0
-   Share

Amazon is definitely considered a top competitor of Walmart. Their tactic last year in response to Prime day was similar, and while yes, it is more reactive than proactive, there is potential to grab attention from consumers. Not only from the press but from getting impressions from consumers who will probably still be price comparing on Prime day.

Braintrust
"With its aggressive response to Prime Day, Walmart keeps itself in the game as a legitimate online alternative to Amazon."

"...in the end Amazon will win because free shipping is just one part of the Prime membership."

"Chasing Amazon can consume untold resources — and has drawn retailers away from focusing on their strength: their stores."