Walmart’s Christmas plans do not include seasonal hires 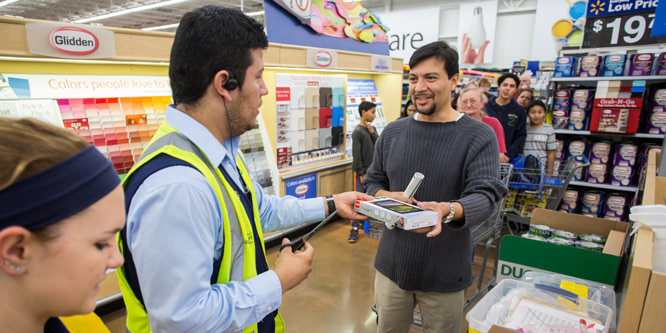 The Christmas selling season is fast approaching and early indications are that seasonal hiring may be on the rise. Walmart, however, will not be a major contributor to the increase after announcing it would forego bringing on thousands of new employees, opting to give more hours to its permanent staff.

Walmart’s approach to staffing for the holidays is not new. Last year, management offered more hours to permanent associates who appreciated the extra work. According to the company, the change resulted in positive feedback from customers.

“We know our associates have the passion to do even more this year,” wrote Judith McKenna, executive vice president and chief operating officer, Walmart U.S., earlier this week in a company blog post. “We’ve increased our focus on service through new training, tools and technology. Thousands of associates have completed training in our Pathways and Academy programs, which prepares them to more effectively serve customers, especially during this busy season.”

The chain plans to give extra hours to a wide range of employees including cashiers, stockers, personal shoppers and Walmart Pickup associates.

The retailer also plans to bring back its “Holiday Helpers,” employees who are responsible for reducing bottlenecks and customer stress at the checkout. The associates, who wore bright yellow vests and jingling hats, helped the retailer address the number one complaint among Walmart customers — slow checkouts.

Walmart was among the retailers posting the biggest improvement in their customer satisfaction scores during last year’s holidays, according to the American Customer Satisfaction Index (ACSI). The chain saw its score improve nine percent compared to 2016, although it was still last among retailers evaluated.

Walmart rival Target has taken a different hiring tact for the holidays. The retailer recently announced plans to hire 100,000 seasonal employees for the holidays, significantly more than the 77,500 it hired last year. Target said it would add 4,500 people to staff its distribution centers and fulfillment facilities as more of its business moves online.

DISCUSSION QUESTIONS: Do you approve of Walmart’s decision to increase hours for existing associates rather than hire large numbers of seasonal store workers? Do you see any potential downside to this approach?

Please practice The RetailWire Golden Rule when submitting your comments.
Braintrust
"It's efficient from an economic standpoint and is good news for employees who have the flexibility and energy to pick up extra hours."

I like this plan a lot for several reasons. First, it gives Walmart employees an opportunity to earn extra dollars during the holiday season and to be able to do it without having to seek a job someplace else. Second, who better to satisfy customers than the existing associates who know their jobs and meet and greet customers every day? Third, I see it being more successful for Walmart because their employees will be happier, their customers will be more satisfied and as a result they will do more business.

Every year retailers hire temporary help and, unfortunately, most of those employees are not well trained and aside from doing tasks that offer very little for the customer experience. So with this program, Walmart has found a winning combination for success.

Walmart made this work last year, there is no reason why they shouldn’t be able to repeat that success. Current Walmart employees can pick up some welcome extra hours and customers get to deal with seasoned employees.

Christmas shopping is always stressful no matter where you shop. I am thankful to my wife who does 90 percent of it and still works full time. My biggest complaint is that seasonal workers tend to be very poorly trained or not trained at all. Whenever you ask a question, the answer seems to be “I don’t know, I just started working here” or “this is my first day.” I know this is a big generalization, but am confident most of you will agree. If Walmart associates want and appreciate the extra hours, then I think it’s a great move as they will have better, more helpful answers when you need help. The shopper will be the winner as it should be.

Offering its current employees the opportunity to work more hours during the holiday season helps Walmart, its employees and its customers. Customers get the advantage of store staff that has some history in working in their positions. Walmart employees get the opportunity to make more money and, although it was not discussed in the article, I would expect it helps lower Walmart’s turnover.

Assuming that every Walmart store has enough associates who are able to work extra hours is not a given — after all, many of these people may be working one 20-hour shift at Walmart and another shift at a completely different type of employer. So Walmart managers will need a workaround to make sure their stores are adequately staffed — especially with the push for more omnichannel programs like BOPIS.

That being said, it’s a net positive for Walmart (saving on training costs, having experienced associates already in place) and for those staffers who are willing and eager to work the extra hours.

Walmart is taking the right approach with this strategy. Existing associates are already committed and loyal to the Walmart brand and will benefit by having the opportunity to earn more income during the peak holiday season. Hiring seasonal workers could be a risky proposition, as it may prove to be disruptive and their loyalties may not be as strong as the current Walmart employees.

Overall I see more upside than any downsides to this scenario. Ultimately the Walmart customers will benefit by having trained, experienced and motivated employees ready and willing to assist.

I started my career, like most in this industry, as a part-timer who always wanted more hours, so I agree with this approach. More hours for the existing part-timers is a very positive step for Walmart. I do not see much of a downside to this except maybe that the staff could get overworked and provide less customer service or even not show up for work. We are talking Walmart so maybe good customer service is off the table anyway!

This makes sense. Existing associates are experienced and knowledgeable; this means lower training and recruitment costs — something helpful when Walmart’s bottom line is under pressure. Ultimately, it will deliver a better experience for the shopper too, something that was evident last year from both Walmart’s numbers and its customer satisfaction ratings over the holiday period.

It’s efficient from an economic standpoint and is good news for employees who have the flexibility and energy to pick up extra hours. When your pour time and money into training your team, retention is key, and having this incentive to look forward to each holiday season is smart. That being said, it’d be nice to see this initiative paired with some sort of program with other merit-based bonuses for workers who balance two or three jobs to pay rent and can’t afford to take on more hours. Incentivize everyone!

This seems like a great, and sensible, idea for a number of reasons. By giving more hours to existing staff Walmart doesn’t have to deal with the expense of training temporary workers (who may or may not provide the high level of service customers expect). Regular customers get to deal with regular staff, and staff can earn extra money over the holiday period. The question is whether Walmart can cover all of the extra hours it needs with existing staff, but clearly the success of last year’s experiment gives them reason to believe it will work.

Cutting out the time and resources it takes to train new hires and eliminating the customer service flubs that naturally result from an influx of new employees makes a lot of sense. My only hesitation is, what if employees can’t work more hours? Stressed out and overworked employees aren’t good for anyone, no matter how well trained they are. I feel like this is the type of decision that should be made on an individual store level.

There are two things that concern me:

As long as Walmart has the employee capacity to meet the demands of the holiday season, this appears to be a good idea.

This sounds like a sound decision on paper, but I still recall long lines at checkout last year and no significant improvement in getting help from associates during busy peak shopping hours on the weekends during the holiday season.

I believe the right answer lies somewhere in between the mass seasonal hiring (which is typically not accompanied with the full training required to truly deliver the right customer experience) and Walmart’s approach. Sure, this makes economic sense for the company, but can they be sure they will have enough associates who want the extra hours? And how much pressure will those associates feel to offer their extra time even if they don’t have it to spare?

Supplementing the well trained existing employees with some number of seasonal workers would make a lot of sense and deliver a great experience to weary holiday shoppers.

This is smart path for Walmart. Why spend extra resources training temporary employees when you have part time employees who can take on the increase in foot traffic? Not to mention, the employees present in stores will be longer term, so they will have more product knowledge than someone who is only doing a two month stint. It saves money and has the potential to boost customer satisfaction. What’s not to love?

Braintrust
"It's efficient from an economic standpoint and is good news for employees who have the flexibility and energy to pick up extra hours."