What are the takeaways from the best holiday season in six years? 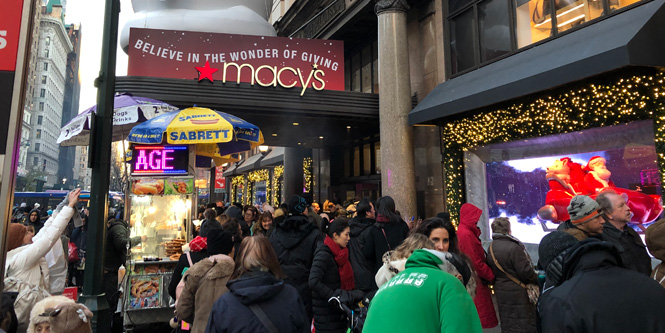 According to Mastercard SpendingPulse, holiday sales in the U.S. from Nov. 1 through Dec. 24 expanded 5.1 percent, the strongest growth rate in the last six years. The gains were led by a 19.1 percent hike in online sales, but also helped by a recovery in some key categories.

Reports earlier in the selling season from NRF, Adobe and others also signaled strength this holiday season.

Apparel sellers are improving their performance through better inventory management and efforts to instill more freshness into offerings, according to analysts. Investments in digital by Walmart and others are similarly boosting online and overall omnichannel efforts. Adobe last week predicted BOPIS-related sales increased 47 percent over the holiday from a year ago, while mobile spending soared 57 percent.

Taylor Schreiner, director, Adobe Digital Insights, said in a statement, “Retailers who can offer the easiest shopping experience, whether through excellent use of data to anticipate shoppers’ needs or by providing an option for picking up products at brick-and-mortar stores, are the ones people are flocking to.”

But much of the improvement is being attributed to external factors. Improving consumer confidence supported by stronger employment, improved wages and tax cuts are offsetting concerns over stock-market gyrations, a potentially slowing economy and the partial government shutdown.

“The reality is the consumer felt comfortable enough to splurge and we’re hearing more and more it’s for items for themselves,” Bob Phibbs, CEO of The Retail Doctor and a BrainTrust panelist, told USA Today.

Amazon may be grabbing much of the online gains. Edison Trends, which tracks the market share of online retailers, reported that Amazon took 81 percent of online sales against other big-box retailers from Dec. 1 to Dec. 19.

DISCUSSION QUESTIONS: Do you see more external than internal factors driving the healthier growth rates this holiday-selling season? What encourages you and worries you most about the 2018 retail holiday season? Does the favorable performance indicate that retail has smartly adjusted to the digital disruption of recent years?

Please practice The RetailWire Golden Rule when submitting your comments.
Braintrust
"Retailers should look at this holiday season as a windfall, and invest it directly back into building the next generation of customer experiences."

"I found many trusted retailers unable to operate their stores efficiently during the holiday season — settling for crumbs when they could have had the whole feast."

"Aside from the other economic tailwinds, let’s not forget the gas price “dividend” this holiday season."

17 Comments on "What are the takeaways from the best holiday season in six years?"

This was undoubtedly a robust holiday season, mostly thanks to relatively strong consumer finances and confidence. Most retailers also helped themselves by managing inventory well and stepping up omnichannel services.

However, I am going to add two important caveats. First, while sales were good I doubt that profit results will be quite so favorable: there are a lot of headwinds on costs that will harm retailers. Second, not all retailers will benefit from the favorable circumstances: there will be some big losers as results are announced in the new year.

On a macro level, there is a strong economy, and job market as a result, functioning as a foundation for spending. There is also Amazon, which as noted above, captured 80 percent of online sales, which shows that there is still one clear leader in terms of being the digital disrupter-in-chief.

For the other 20 percent, there was aggressive promotion throughout the holiday season, starting ahead of Thanksgiving. Couple that with leaner inventories and retailers should report better numbers. How much better? That will reveal which ones, if any, are actually selling goods at reasonably healthy margins.

The economy is strong, unemployment is low and people are spending. I love it when it is all working. As we look at the holiday numbers, I see that some retailers are learning (and winning) in their efforts to find the balance between online and in-store sales. They are using data to personalize and give their customers a better experience. They are accommodating their customers’ preferences. All that said, we are in a politically and economically volatile time. As long as we have the consumer’s confidence, the good times will continue to roll.

All the innovative retail promotions, government shutdowns and stock market drama cannot compete with the tactical, personal impact that unprecedented low unemployment, tax cuts and consumer confidence are generating. This is no mystery. People feel great about the undeniably strong economy. And that always shows in their spending.

Several mall retailers looked like they executed a smarter plan this year versus last year. Many stores looked lighter in inventory and more focused than last year in the weeks before Christmas. Part of that is the result of selling more in October and November taking some of the pressure off of December. And part is planning it better from the beginning. And managing weeks of supply starting in October so that they didn’t depend on December to sell down. Which means that the margin outcome is difficult to predict. Aggressive promoting may have hurt margins pre-Christmas, but that could also mean some margin improvement post-Christmas albeit on much lower sales volume. Gap in particular looked much better this year. Last year the back portion of the store was jammed with prior delivery product. This year was markedly lighter in that kind of content. Looks like they are determined to do a better job at seasonal conversion this year.

Aside from the other economic tailwinds, let’s not forget the gas price “dividend” this holiday season. Whether it’s sustainable is a different question, but it’s notable that stores were up against strong 2017 comparisons.

Two other factors: The successful expansion of omnichannel initiatives, and the market share gains for the retailers who kept their doors open this year.

Definitely more external factors, though I agree with Neil that it looks like retailers behaved themselves overall when it came to inventory and were fairly disciplined about that through the season. However, I think the most important take-away from the season is that retailers should NOT be patting themselves on the back, or walk away from this holiday thinking they have “solved” omnichannel. If anything, retailers should look at this holiday season as a windfall, and invest it directly back into building the next generation of customer experiences. I think 2019’s holiday will be the story of those who do that – and those who don’t.

Most of the increase in holiday spending is attributed to external factors, higher incomes, lower unemployment, higher consumer confidence, lower gas prices, etc. These external factors determine how much consumers are comfortable spending, which drives their holiday shopping budget.

The internal retailer specific factors determined which retailers outperformed their peers. Retailers have continued to make great progress in improving the customer experience with omnichannel services and mobile capabilities.

The key factor for this year’s holiday season success is, in a word, convenience. Retailers have finally come close to where the shopper wants them to be, from marketing, through sales and finally fulfillment. Retailers also took advantage of the early Thanksgiving this year to stretch the shopping season and have several campaigns.

The economy was right for robust business; employment was right and consumer attitudes were ready, purchase options abounded and promotions were unleashed. That is what I believe really fueled the sales environment. And when the strategic collision took place between Amazon and the retail world, and all other online sellers, it created an environment of aggressive sharpness that became mandatory in all retail operations, promotions and events. Everybody had to up their game; it was the ante to be in the hunt. And all of this has shaken, and will continue to shake the retail markets into new ideas, strategies and performance. It just got easier for the customer, but the challenges to successfully continue for retailers will be intense strategy generation to continue occupying top-of-mind positions. It’s going to be interesting.

Convenience was king this year. Whether online, in-store, or hybrid – the experience for the consumer was smoother at every turn. It looks like consumers might also be over the hump on a hesitancy to by apparel online. It would be interesting to see a break out of what types of apparel brands and items contributed to the 10 percent growth.

External factors I think, a combination of the macro news on the economy for sustained periods of time let people feel comfortable enough about the future for now. Low gas prices help drive travel and spending and puts people in the holiday mood. The volatility in Washington and the stock market doesn’t help but I do wonder if some people did “retail therapy” to get away from the news and reality. Stores do seem to have better managed their inventory when I visited. A combination of a bunch of factors for sure.

We knew it would be the best holiday for retail in a generation and it proved validated. The whipsaw stock market and government shutdown, however, could take the bloom off the rose in the final week. I found many trusted retailers unable to operate their stores efficiently during the holiday season — settling for crumbs when they could have had the whole feast. Those who had gains should invest in a branded shopping experience in their stores that they can execute flawlessly. We’ll see massive closure announcements in January from those who missed the best holiday sales in a generation.

Retail companies have done little to remove themselves from the downward trajectory of the market(s). This is largely due to the spread of cookie cutter mentality into all aspects of the businesses. Add to this the closing of big to small stores all over the world with a dab of global recession and you create a redirection of discretionary spending that profits the few who have price, product and availability.

The good news may be that the USA businesses may continue to do better as we move away from world wide financial investments, support and debt restructuring. This is an example of how less is sometimes more. We are left with a trendy lesson rather than a good business lesson in that the fundamentals need a 21st century rebuild for sustained growth.

We’re talking “omnichannel” but (still) breaking out “online” as if it’s some kind of product category … let everyone’s New Year’s Resolution for 2019 to be to stop doing that!

My takeaway is people spend what’s in their pocket, so tax cuts + more take-home pay = higher spending. But then at some point you have to pay for the cuts: 2021 called and they want their money back.

“Retailers who can offer the easiest shopping experience, whether through excellent use of data to anticipate shoppers’ needs or by providing an option for picking up products at brick-and-mortar stores, are the ones people are flocking to.” I like this quote — curious as to the trajectory of “pickup” gift-buying statically vs. simply getting it super-fast shipped to door. Are the ‘losers’ this year the ones that offer only one or neither option? That probably also varies quite a bit by category.

The most important trend this year reinforced last year’s takeaway: every retailer competes online first. 2019 will be the year of accelerating online marketing presence.

Braintrust
"Retailers should look at this holiday season as a windfall, and invest it directly back into building the next generation of customer experiences."

"I found many trusted retailers unable to operate their stores efficiently during the holiday season — settling for crumbs when they could have had the whole feast."

"Aside from the other economic tailwinds, let’s not forget the gas price “dividend” this holiday season."