What can marketers and tech firms learn from BK’s co-opting of Google Home? 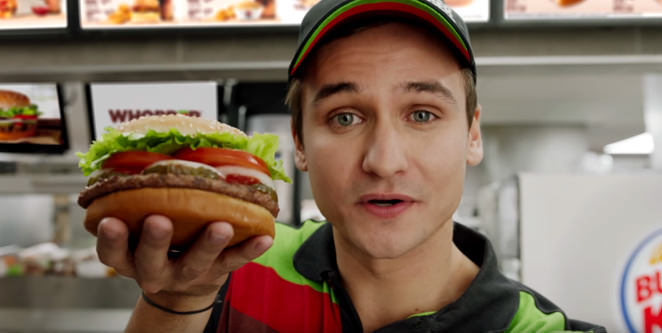 Burger King and Google are at odds over the fast food chain’s newest commercial, which was designed to activate Google Home digital assistants in households across the country.

The new spot features an actor portraying a Burger King employee holding one of its Whopper sandwiches. While facing the camera, the actor says, “You’re watching a 15-second Burger King ad, which is unfortunately not enough time to explain all the fresh ingredients in the Whopper sandwich, but I’ve got an idea.” (Actor motions camera to come closer.) “Okay Google, what is the Whopper burger?”

The spot dubbed the “Connected Whopper” by Burger King succeeded in activating Google Home devices in households across America when it first began broadcasting this week. While Google didn’t issue a comment on the spot, it became clear when Google Home devices stopped being activated during the commercial that the company wasn’t pleased.

Undeterred, Burger King launched new versions of the commercials with different female and male voices posing the question to Google. This appears to have done the trick as Google Home devices were once again activated.

Once Google Home is activated by the question posed in the Burger King ad, it begins reading the introduction to a page on Wikipedia devoted to the chain’s burger sandwich. Wikipedia, USA Today reports, suspended edits to the page when users began adding comments, for example, that the sandwich includes ingredients such as “rat and toenail clippings.”

Unhappiness with Burger King’s commercial was also expressed on YouTube. The spot, which has nearly 2.5 million views to date, has more thumbs down reviews (23K+) than thumbs up (19K+).

Those who subscribe to the theory that there is no such thing as bad publicity can point to the amount of coverage devoted to this story as a win for Burger King.

New research from Mintel shows that 31 percent of Americans currently own or would like to own a digital assistant such as Google Home or the Amazon Echo.

DISCUSSION QUESTIONS: What can marketers and tech companies learn from Burger King’s co-opting of Google Home with its new commercial? Will the furor over the spot and Google’s response affect Whopper or Google Home sales?

Please practice The RetailWire Golden Rule when submitting your comments.
Braintrust
"Perhaps Google can learn what it feels like to be “co-opted.” They’ve made a very lucrative business doing just that with (and for?) all of us."

"Hats off to those who put some creative into creative advertising in the us-too category of social media."

"...no harm done by the ad...could have been seen as PR for Google Home. I would have thought they were in it together."

10 Comments on "What can marketers and tech firms learn from BK’s co-opting of Google Home?"

This was a good one-off publicity stunt for Burger King, but not something that other marketers should emulate. Doing it more than once will become annoying, upsetting more consumers than it entices.

I find it interesting that Google can collect data from almost all aspects of your life, use this data to serve invasive advertising into your life all in the name of personalization yet when BK uses Google to extend its reach, Google cries foul. Perhaps Google can learn what it feels like to be “co-opted.” They’ve made a very lucrative business doing just that with (and for?) all of us.

I agree Adrian! There was no harm done by the ad and could also have been seen as PR for Google Home. Had I seen the ad, I would have thought they were in it together. I also thought it was clever.

Hats off to those who put some creative into creative advertising in the us-too category of social media. I especially like that this points to the fast emergence of native advertising at a level that ties together different devices, a winning strategy and consistent with convergence in the paid-owned-earned media model.

I agree with Max. It’s a good buzz creator for Burger King but not something that customers will want to happen all the time. The first time might have been amusing but after that it would rapidly become annoying. As the negative edits on Wikipedia showed, there could also be an additional downside for the retailer.

Do not put one of these devices in your home. The end.

This was a smart hack job against Google. Burger King exposed a vulnerability with voice-activated digital assistants and IOT devices where a pre-recorded commercial took control of a home device. I can see legal problems with invasion of privacy and would not recommend marketers repeat this tactic.

What if a heat wave occurs over the summer and the electric company spokesperson on TV asking people to preserve electricity just walk up to the news cameras and say, “Okay Google, turn the air conditioner off”? do we really want this hack in our homes?

Kudos to Burger King for being the first brand to effectively “hack” this new medium and drive a nice bump in BK and Whopper brand relevance. Won’t hurt, and will probably help Whopper sales.

These devices are already changing buyer behavior, and as these devices get smarter (e.g. recognizing your voice footprint) and more ubiquitous they’ll become a powerful channel that traditional retail marketers need to understand and exploit.

Times are changing. It’s inspiring to see examples of truly creative thinking — and an interesting execution by Burger King — that not only leverages Google but demonstrates an acute responsiveness to this new world order of advertising in which we now create. Burger King’s spot also reminds us of the potential perils: they weren’t expecting the negative and incorrect entries on Wikipedia. The world of artificial intelligence and voice-activated in-home assistants is nascent — we will continue to learn what makes us comfortable or uncomfortable over time. Experiences that might make us uneasy today will likely become the new normal in the coming years. Remember that online retargeting was initially rejected and received a lot of negative media coverage, even in the mainstream media, but now it is widely accepted as consumers have learned its benefits and marketing and technology firms have become smarter about how they execute. This being said, the Burger King experiment also points the way to opportunities around features that might emerge in the AI/voice-activated space: enhancements, for example, that give… Read more »
0
|
0
-   Share

Congrats to Burger King for being very clever in finding the newest way to leverage the Google search machine to their advantage! The only reason Google is crying foul is because they didn’t think of a way to monetize this first! It certainly highlights a potentially scary way for hackers to take over control of devices in your home. Completely agree that this is a novelty that will quickly wear off and become an irritation to consumers if it gets repeated. I’m most curious that Burger King chose to do this with Google Home and not Amazon’s Alexa which presumably is in more homes. Perhaps this highlights a deficiency in Google’s product vs Amazon’s as you have to assume Burger King tested both prior to shooting the commercial.

Braintrust
"Perhaps Google can learn what it feels like to be “co-opted.” They’ve made a very lucrative business doing just that with (and for?) all of us."

"Hats off to those who put some creative into creative advertising in the us-too category of social media."

"...no harm done by the ad...could have been seen as PR for Google Home. I would have thought they were in it together."