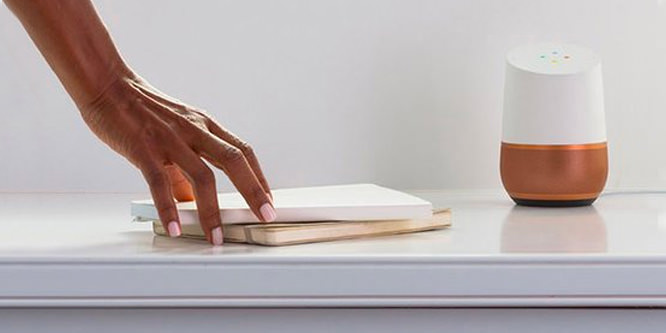 “Okay, Google. How do I shop?” Those simple words may signal Google beginning to eat into the early market share lead that Amazon.com has established with its voice-activated Echo devices.

Yesterday, Google announced in a blog post that owners of its Google Home voice-activated speaker would now be able to place product orders from more than 50 local and national retailers participating in its Express delivery program. Among the more prominent chains participating are Bed Bath & Beyond, Costco, Kohl’s, PetSmart, Target, Walgreens, Wayfair.com and Whole Foods. Moosejaw, which was just acquired by Walmart, is also among retailers in Google’s Express program, although its parent is not, nor are its sister companies — Jet.com, Sam’s Club and ShoeBuy.com.

When Google Home was introduced last October, it got high marks for its ability to provide answers from Google’s database as well as translations and directions. The 5.6-inch device, similarly to Echo, also offers streaming music while giving owners the ability to manage devices such as lights and thermostats in their homes.

Between now and April 30, Google is offering free membership in the Express program. Delivery is also free. Those joining Google Express have the option of paying an annual fee of $95 per year or $10 monthly. After April 30, members ordering from Costco, who do not have a membership card for the warehouse club chain, will pay 10 percent additional for items ordered from the retailer.

DISCUSSION QUESTIONS: Will adding Express services to its Home device help Google cut into Amazon’s lead in the voice-activated digital assistant market? How do you think voice services will affect how Americans compute and shop in the years to come?

Please practice The RetailWire Golden Rule when submitting your comments.
Braintrust
"It’s an opportunity — or attempt — for several retailers to marginalize Amazon’s e-commerce business that has eaten into their own market share."

"Amazon has a better track record in this area in my opinion than Google. And don’t count out Apple just yet…."

11 Comments on "Will Costco, Kohl’s, Target, et al give Google Home an edge over Amazon’s Echo?"

If this works, it’s an opportunity for Google to play catch-up on the head start that Amazon has established with Echo, and to establish a stronger beachhead on the “device” front. But it’s also an opportunity — or attempt — for several retailers to marginalize Amazon’s e-commerce business that has eaten into their own market share.

Voice is as natural a data access or activation interface as visuals are the preferred way of ingesting lots of bits that relate to each other. The need in voice interface is that requests be fulfilled efficiently. If the paths to outcome can be shortened with “pre-load,” all the better. But machine learning offers a stronger long-term proposition for personalized service. Google’s approach may reduce the pain of initializing service value, but catch-up in the race to improved value is quickly received with the combination of natural language interface and machine learning.

I believe that voice-activated services will definitely improve as AI technology improves. These in-home and at-office digital assistants will become a mainstay over the next few years. There is no question. They are convenient and somewhat entertaining. There will be a few kinks along the way because they are always on and listening to what you are saying. So if you happen to have a child named Alexa, you have to be careful what you say. Google has a nice product. Is it strong enough to compete with Amazon? Yes, to a point. Is it strong enough to take share away from Amazon? No. Amazon’s system is frictionless. Amazon controls the software, hardware, library and marketplace. Google’s system is more complicated since they are not the seller and shipper of products, nor do they own the entire library. Google shopping has been online for several years. It is great for search and price comparison, but it has lost market share to Amazon in product search. In the consumer product world, Amazon accounts for about 52… Read more »
2
|
0
-   Share

Adding Express to Google Home will help it get established and gain some market share, but it will not overtake Amazon. In the years to come, as more and more households have devices like Home and Echo, consumers will become more comfortable with using them to order products and services. The IoT will also help them grow. But with these devices, you need to know exactly what you want. There’s currently no capability to research, compare, shop prices or read reviews. Those factors will impede growth and acceptance for commerce.

I believe this type of “soft” consolidation via an over-the-top offering like Express by Google Home will be a key strategy for traditional retailers. It will be interesting to see how Google integrates the retailers on the visual interaction side, via an app or web. What makes Amazon a winner, in addition to their open Alexa ecosystem and first-mover advantage, is the coherency between devices and Amazon.com and the Amazon app. The two work rather harmoniously, and will inevitably get better. For retailers, there is a rub — who owns the customer? For this strategy to work, retailers really have to think differently about their position in the value chain. Last January, I made a prediction, which I will see if it holds true. I said “By 2021 Apple, Facebook, and Google will own the Customer, remaining retailers will own the Product; Amazon will own Everything.”

This has been Google’s plan from the start. It’s one way to fend off the loss of ad revenue voice interfaces cause and the loss of product search Amazon has taken.

I’ve been involved in designing a similar voice-assisted tool for a couple of years and can say without hesitation, it sounds wonderful until you look at the functional details. For example, Target and BB&B have plenty of product overlap. If a consumer wants to buy one of those products, where does it come from? Is there a “get me the best price” mechanism that’s going to be built in? What about buying six items from three vendors? Etc., etc. …

Amazon has an inherent advantage being the sole vendor/marketplace that Google Home and its partners are going to struggle to topple. I never count Google out, but it’s not the first-mover scenario that matters most here, it’s the execution and multiple vendors that otherwise don’t play well together that make it very challenging.

Google may be the one company that can rally Amazon competitors into a foundation for developing a voice activated e-commerce platform to compete with Alexa. It will be tough to compete with the simplicity of Amazon and the virtues of Prime, but if Google can figure out how to tap into local purchase intent (OK, Google, where can I find an Xbox on sale near me?) it could be formidable. The trick is that retailers need to aggressively and quickly commit to Google and put their own Echo competitor dreams to the side.

This is a potential opportunity for Google Home to compete with Amazon’s Echo. The initiative provides access to a variety of retailers like Amazon does. However, I would be interested to know what kind of products consumers are purchasing using Amazon Echo — what products do consumers order without seeing them first? If Google Home can offer that same variety of products, there is a good way to compete. Is shopping using a device that does not allow you to see selections widely popular? Choosing music, turning lights on in the house or answering questions seems a more intuitive way to use the devices. Competing on shopping may not be the best choice.

AI is a game-changer for retail. To be able to tell a machine to order something for you on the spot vs. making a list is key, but more importantly, just to be able to ask questions on the fly is even bigger. A change in lifestyle more so than retail, but retail is definitely a part of that.

Re: Kohl’s, Costco and Target giving Google an edge … I’d first have to ask, are they giving themselves an edge vs. Amazon right now? So a resounding no, in my opinion, to both questions.

Voice command with a potential for “child’s play” in the home or office is still in security discovery mode. The opportunity for foul play is a burden with potential liabilities yet to be discovered. As usual new technologies like the “internet of things” are often exploited by sales and marketing prior to implementation of the necessary controls. This is something that needs the consumer’s full attention to detail.

This certainly adds another interesting use case for Google Home, but maybe the real question is who are the consumers buying an Amazon Echo vs those buying Google Home? My belief is that the Alexa user was already inclined to use shopping features and other specialty “skills,” while Google users are more interested in voice activating their search requests.

Will this be an advantage for the retailers participating in Express? It may be their only way to compete with Amazon’s integration. You certainly would not expect a Target Home device to be as successful as either the Echo or Google device.

It’s all about adoption, and that will depend on which product executes better. Amazon has a better track record in this area in my opinion than Google. And don’t count out Apple just yet….

Braintrust
"It’s an opportunity — or attempt — for several retailers to marginalize Amazon’s e-commerce business that has eaten into their own market share."

"Amazon has a better track record in this area in my opinion than Google. And don’t count out Apple just yet…."