Will Google’s new devices give Apple and Amazon some competition? 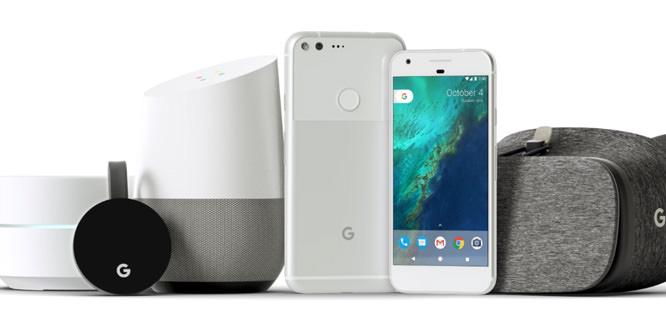 Some might say that Google’s big reveal of new devices yesterday represents a me-too move to rivals including Apple and Amazon.com. To be sure, Google management doesn’t share that view and believes the new devices mark the start of new era for the tech giant.

Among the devices being debuted were the new Pixel and Pixel XL smartphones. The two models represent the first smartphones that Google controlled internally from ideation to design, engineering and testing. The phones, which come in black, a limited-edition blue and silver, are the first to use Google’s new Android Nougat 7.1 operating system. The phones come with a voice-controlled virtual assistant and a 12.3 mega-pixel camera that the tech giant is calling the “best smartphone camera ever” based on its score of 89 from DXOMark. The Pixel phones also include a headphone jack, in contrast to Apple’s newest iPhones.

One possible downside to Google creating its own phone will be a potential weakening of its relationships with vendors like Samsung, LG and others who have been manufacturing Android-based phones and other devices.

Among the other devices Google debuted yesterday was Google Home, a voice-activated speaker to rival Amazon’s Echo. The device, which at $129 will retail for $50 less than Echo, provides answers to questions from Google’s database, translations, directions and streaming music. Home can also manage other devices such lamps and thermostats. The design of the 5.6-inch Google Home is not at all tech-ish, a distinct break from Echo’s look, and is intended to blend in as part of a home’s décor.

Further, the Made By Google product launch yesterday included the debut of the Daydream View VR headset, the Chromecast Ultra streaming TV device and a home Wi-Fi system.

DISCUSSION QUESTIONS: What do you make of Google’s new devices? Is Google ready to provide real competition to devices from Apple, Amazon and others?

"Is Google moving out of its lane? I remember when Amazon got into the smartphone business. "

"The far more interesting thread for those of us in retail is that this software company is pushing so hard to succeed in the world of physical things."

9 Comments on "Will Google’s new devices give Apple and Amazon some competition?"

My initial reaction is that this is Google’s me-too moment. There were no breakthroughs in technology. Google lacks Amazon’s vast marketplace to sell goods through the home. The Pixel phone has few differences from top-end phones from Apple and Samsung. These devices may give Google a foothold in the marketplace, but they did not blow anyone away.

Is Google moving out of its lane? I remember when Amazon got into the smartphone business. Google may have a better shot at competing against Apple, Samsung and others, simply because it integrates with so much that their customers currently use. I wonder if we’re going to see another VHS vs. BetaMax type of “war.” Is there enough room for more players in this space? Time will tell.

When reputable suppliers with deep pockets (like Google) offer technologies such as the Daydream View VR headset, it is usually with some sense of market trends and business needs. Let there be no doubt that the enhanced experience of virtual reality will change the retail landscape in that middle ground between physical and online shopping. In-store VR will enhance the appeal of the physical store initially, but will give way to improved online customer experience. Brands that disregard VR do so at their own peril.

Yes, Google’s new devices will create competition for Amazon, Apple and Facebook. As retail, technology and media converge, it is essential to study each company’s revenue/profit model. Incentives drive innovation, and how each player goes to market has big implications for which ecosystems shoppers get most enmeshed in. Apple makes money on hardware sales and content (music and video) sales and subscriptions, is weaker on services and barely competes on ad revenue. Compared to the others, they’re “closed” — they’re only just beginning to open Siri up to developers, for example. Google and Facebook are all about ad revenue, Google driven by the highly intentional demand signals of search and location, and Facebook based on identity and location. Google plays well with others; Facebook less so. Amazon wants to help people buy and add undeniable value to Prime membership, eliminating friction however it can. It has the most diversified portfolio of businesses among this group, but its innovations are still largely about making it easy for people to buy from them. The real transitions to… Read more »
1
|
0
-   Share

The hardware business is not for the faint of heart, but necessary if Google wants to keep leadership in web services and have a platform to launch new initiatives like VR, AR and robotics.

Financially I expect Google will do OK with these devices. But the far more interesting thread for those of us in retail is that this software company is pushing so hard to succeed in the world of physical things.

In fact, I was looking at a list of top 10 most valuable companies and someone had said “look at all the software.” Yet far more interesting was all the hardware: Apple, Amazon, Google/Alphabet, etc.

What I believe we should take from this is how critical the physical thing is. It’s very human. And that means stores remain retail’s single biggest strategic advantage — when used right.

Google’s entry gives it the ability to better control the ecosystem, create more seamless mobile experiences and establish a way to get into homes and businesses in the future to control the downstream experience potential. I see Amazon’s Echo as the device, and ioT’s potential and Facebook’s ever-presence as the drivers that have spurred Google to take a step into hardware. The goal isn’t to be a maker of hardware, we’ve seeing the profit of phones dropping out as the replacement cycles are getting longer. It’s the omnipresent connection that has the most potential value to Google in the future.

Google excels at improving what others might do first. Android is a big winner while Microsoft is no where to be found. In fact, Google was not the first search engine either. As far as Google home goes, their big advantage is that their voice recognition is far superior to Amazon (personal experience) but I can’t compare to Apple/Siri. The thing is, the full connectivity of the home (includes TV and thermostats which they have) so this is just the first shot across the bow.

Google’s announcement will lift awareness for the category of connected home devices, but it won’t catapult Google into the lead anywhere.

Samsung will continue to lead in Android phones. This is because Google Pixel phones are late smartphone entrants and will be more expensive than the predecessor Nexus line.

The promise of AI remains a promise. Siri has been around for five years but still doesn’t turn on most users — it gets turned off more frequently. Only 30 percent of iPhone owners use it regularly.

Instead, by tying together a launch of smartphones, Google Home and Chromecast, the company links the ideas of mobile devices, entertainment and home automation. This will raise awareness and consideration of all the options, including Amazon Echo, Samsung SmartThings and even Alphabet’s Nest.

"Is Google moving out of its lane? I remember when Amazon got into the smartphone business. "

"The far more interesting thread for those of us in retail is that this software company is pushing so hard to succeed in the world of physical things."