What does ‘patriotic’ mean for brands and retailers? 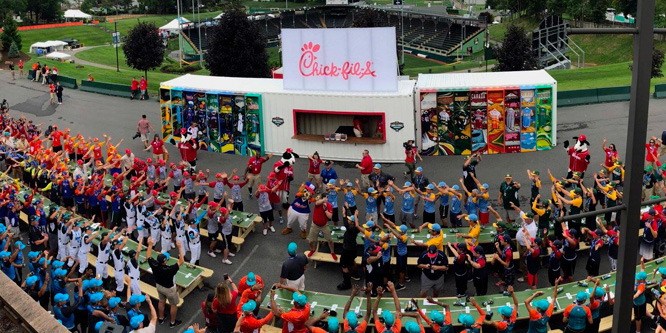 Chick-fil-A has been regularly called out for its CEO’s decision in 2012 to come out against gay marriage. The chain has been banned from two major airports — San Antonio and Buffalo — and several universities.

Patagonia, also threatened with boycotts, has blasted the Trump administration on environmental policies including reducing the size of two national monuments and exiting the Paris climate change agreement.

The political tone was particularly shown by gains from media companies, including FOX News, which climbed four slots on the top-50 list, and MSNBC, up eight spots. The New York Times and The Washington Post made the list for the first time. The findings were based on a survey of nearly 6,000 consumers.

“Interestingly, there’s a high correlation between consumers’ increased self-perceptions of being patriotic and the appearance of more media brands in the top-50,” noted Robert Passikoff, president of Brand Keys, in a statement. “Perhaps more people are paying more attention this year.”

Jeep, Disney, Ford and Coca-Cola still led the list and Brand Keys said its rankings do not mean other brands don’t have patriotic resonance. Being an American company, being ‘Made in the USA,’ or having strong CSR (corporate social responsibility) initiatives can boost a brand’s perception.

However, the findings show approaches “surrounded by flags and fireworks” now have to compete in socio-political contexts. Said Mr. Passikoff, “Politics is now making itself felt more in the brandscape than ever. Particularly as to how consumers view themselves and their brands-of-choice through a political and patriotic lens.”

Numbers in parentheses indicate movement up, down, or new to the ranks from 2018.

DISCUSSION QUESTIONS: Do you think consumers increasingly view brands in political terms? If yes, is this a perception that brands and retailers should encourage?

Please practice The RetailWire Golden Rule when submitting your comments.
Braintrust
"We ought to be able to hold different political views and still be 'patriotic.' "

"Separating economic activities from the vagaries of political partisanship is necessary, otherwise we will find much too late that we sow the seeds of our own destruction."

"If consumers weren’t increasingly viewing brands in political terms we would not see companies taking positions."

15 Comments on "What does ‘patriotic’ mean for brands and retailers?"

The politicization of brands has increased, mostly in line with the more polarized political environment. Many brands have deliberately taken sides, usually aligned with the beliefs of their founders, corporate principles, and customers – or a mix of all three. That’s not such a bad thing if the belief is genuine and it fits with the ethos of the company. Patagonia, for example, taking a stand on environmental issues makes sense – it’s a company that loves the outdoors!

In my personal opinion, I think having a viewpoint is fine so long as it’s not too intrusive, is rational, and is not the only thing the company focuses on. However, the downside is that some people will boycott and will complain. However, words usually speak louder than actions and I’ve not seen many boycotts – from left or right – that have been particularly successful.

I think there’s a place for political opinion but, to me, it is the individual and not a corporation. We all have views on everything: religion, pollution, food and yes, politics. However within any organization, there are many differences of opinion. So I don’t feel any brand or any company should take a political position because there is no place for it and most likely whatever that position is, a substantial percentage of the employees will not agree with it. I feel the same with celebrities who use their popularity to voice their political opinions attempting to sway their fan base to their way of thinking. We should all take a step back and be grateful for the magnificent country we live in; respect, and treat everyone fairly regardless of their color, sex, religion, or their political opinions. Businesses should focus on their products and grow their company, and the individuals working for that company should be entitled to voice their ideas. Of course when this doesn’t happen, we wind up with extreme yelling and… Read more »
4
|
-1
-   Share

This is all about understanding who your customer is. Whether it’s right or left, if you know that the people that love your brand feel strongly about something, then damn the torpedoes! (My dad taught me that expression.) Charge ahead full throttle.

I also think it says something about a brand that has the guts to say, “this is who we are.” That their faith in what they feel is right is powerful enough to withstand the blasts from those that disagree. So all in all, go for it, tell us who you are and who you aren’t. Better brand definition is always a good thing. Wishy-washy is not.

If they do, we are all making a mistake somewhere. It’s fun and it is right to celebrate one’s country, its birthday, and more, but not at the expense of making someone else look bad, smaller, or unpatriotic.

I think that everything is political in the environment today. I believe the fired up emotional spirit that constantly escalates from everyone continues to prod discussions on whether one entity is right or wrong. I believe every business should show pride in America. However, there are times when corporate leadership has to take a hard line based on their corporate business values, and other times where their personal values perhaps should be kept personal. I would seriously hope that businesses would not encourage the platform of judging their businesses by political/personal positions.

Let’s not confuse “patriotic” and “political.” Sometimes a political position is a natural extension of the brand promise, as in the case of Patagonia. And sometimes a political/social position has nothing to do with the brand promise, as in the case of Chick-fil-A. But in either case free speech says that we have the right to take a stand — and bear the consequences. We ought to be able to hold different political views and still be “patriotic.” Unfortunately, that’s now a lot harder now than it used to be.

Brands are bringing this on themselves if they are viewed politically. What webs we weave to catch ourselves.

My own experience is that “Made in America” has little impact — until AFTER shoppers decide the fundamental product is good.

I yearn for the days when brands simply made good things and didn’t choose to aggravate the already aggravated political divisions in the U.S. — whether from the extreme right or mild left.

With regard to the list, I don’t even know what “patriotic” means. #1 is an Italian company. #4 has more than 80 percent of its revenues outside the U.S. And if “patriotic” means iconic American brands, where is Budweiser?

To today’s’ question: If consumers weren’t increasingly viewing brands in political terms we would not see companies taking positions. Hopefully those who do it understand the risks and rewards. If there is no gain, stay away from whatever position you are considering.

Politics is much more than political parties. Politics is about who is heard, who gets what when dealing with money, power, status, and social goods. Brands and retailers are economic and legal entities in pursuit of creating wealth, and each with rights and obligations as they operate in a political environment. Today’s arena is highly charged because of how political leaders have applied national symbols and skewed our founding values to advance their own power. The appropriation of national symbols for narrow interests politicizes the very essence upon which we, as Americans, have united. Go back to the 1940s and ’50s and listen to the public service announcements — they galvanized the nation to accept the different ethnicities, languages, and races that have made our country great. We sacrificed to save Europe and continued with its reconstruction – it was in the national interest: morally, economically and politically. We are great in upholding eternal human values and unbound spirit, America is so much more than its GDP – ideals are powerful and inspiring while economies… Read more »
9
|
0
-   Share

Mohamed, thanks for the very clear reminder of the inclusive nature of patriotism.

Yes, customers definitely are increasingly viewing retailers in political terms. Some brands most definitely should encourage this if it’s core to who they are and what they stand for but, unless that’s the case, I don’t see what value it brings for a corporation to make a political stand unless it’s front-and-center to their DNA (or on something that violates the brand identity that they’ve built).

Look no further than Wayfair’s protest last week. People don’t identify Wayfair as “furniture for people that view politics as [insert party or political idea]”, so they were right to continue on as usual. Patagonia and REI, on the other hand, have the latitude to have a strong say when it comes to the environment, conservation, and political topics that impact things core to their identity.

The point is, it’s a slippery slope, and comes with its own set of drawbacks and benefits. I imagine it’s much easier for a non-public company (i.e. REI is a co-op).

There is a difference between being patriotic and political. Honoring America with a flag or wanting to buy “American Made,” is different than making a political statement. Brands who make statements are purposeful about making their beliefs and values known. That’s different than flying the flag on the Fourth of July.

“Coca Cola,” AT&T and Twitter are patriotic? Methinks the respondents need a dictionary.

Most brands smartly try to steer clear of anything that could alienate customers. Nike had to make a stand regarding Colin Kaepernick. Many thought Nike was taking a risk by standing with him (or maybe it should be kneeling with him), but Nike understands its core customer base and most of their sales are outside of the U.S where support of Kaepernick is prevalent. Nike sales and stock price have risen since 2018 when this began and their latest decision (nixing the Betsy Ross flag shoes) is likely driven by profit more than politics.

Patriotism is neither a right nor a left political dichotomy. It is a visceral love for country, even a willingness to die on a battlefield in perceived service of a higher purpose, despite personal conflicted political purpose.

From a retail or consumption standpoint Americans tend to pay much more attention to the price/value equation as the baseline, but the locally sourced, country of origin facts as the ultimate decision maker perhaps more so now, than ever before in our history.

I would suggest that this is where the younger generations have moved this outdated thinking from old school singularly patriotism thinking to locally sourced, ethical, climate and socially responsible thinking that not only addresses made in America, but much more smartly recognizes and hold US manufacturers accountable beyond local production at any cost thinking.

Our younger generation is taking patriotism to the the next and more tangible, responsible level of thinking.

Braintrust
"We ought to be able to hold different political views and still be 'patriotic.' "

"Separating economic activities from the vagaries of political partisanship is necessary, otherwise we will find much too late that we sow the seeds of our own destruction."

"If consumers weren’t increasingly viewing brands in political terms we would not see companies taking positions."