What follows all-day breakfast at McDonald’s? 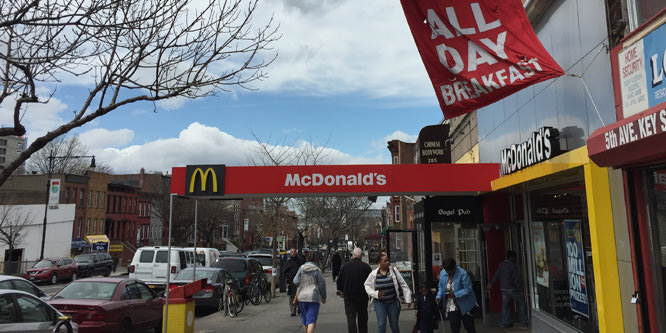 There’s no doubt that McDonald’s business has benefited from the decision to make items from the company’s breakfast menu available throughout the day. In July, management made the decision add more breakfast sandwiches to that offering — Biscuits, McGriddles and McMuffins. Coming off a quarter in which McD’s posted a 1.8 percent increase in same-store sales in a softening market, some wonder how long the chain will continue to see a bump from breakfast and what the company plans to do next to keep sales momentum going.

Thirty McDonald’s franchisees surveyed by Nomura are expecting same-store comps to fall nearly one percent in the current quarter. Those polled have a number of gripes with McDonald’s, including what they see as excessive discounting, which drives profits down, a bloated menu with too many slow movers, and increased labor costs, which put a further strain on the ability of franchisees to make money.

The problem of having too many items on the menu has slowed the ability of restaurants to fill orders placed by customers. While adding breakfast has increased sales, some say, it has also made it more difficult for franchisees to deliver on the promise of fast food. To be sure, McDonald’s is not alone in this regard. A study of the drive-thrus at 15 quick-service and fast-casual restaurants by QSR found times have slowed across the industry.

Richard Adams, a former franchisee who runs Franchise Equity Group, is among those who think that all-day breakfast can only do so much for McDonald’s. He told CBS News that the company benefitted in the last quarter of 2015 because of warm temps across much of the nation, something that is not predicted for this year.

“If we have a normal winter, it will be impossible for McDonald’s USA to show positive sales numbers over the next six months,” Mr. Adams told CBS. “All-day breakfast has been an interesting promotional activity, but it hasn’t had a big impact on same-store-sales.”

DISCUSSION QUESTIONS: Do you think all-day breakfast can continue to lift McDonald’s or does the chain need to make menu changes to keep from sliding back? What would you do if you were in charge?

Please practice The RetailWire Golden Rule when submitting your comments.
Braintrust
"If I were running McDonald's, I'd re-examine everything."

"With the resources they have, the first thing I would do is add a line of higher-end foods that someone like me would actually want to eat..."

"McDonald’s seems to be choosing the “supermarket strategy” to QSR..."

13 Comments on "What follows all-day breakfast at McDonald’s?"

This might not be the answer you’re looking for but McDonald’s, as the market leader, is in the unique position to change the industry. It has permission to do that. Fast food, while still a gigantic market, is stagnant and needs to be re-thought. If I were running McDonald’s, I’d re-examine everything.

All day breakfast was a smart move and it will continue to pay dividends. McDonald’s is better with it than without it. It is probably some of the best product they have.

But what they are fighting is a fast food trend that is moving in the wrong direction. And there is probably no turning it around.

Consumers’ desires have changed and brands without the “McDonald’s” name will take advantage of it. McDonald’s developed and rode its brand for decades successfully. It means something in the customer’s mind. That meaning is just not very valuable anymore.

Turning around a situation like this is even more difficult than starting from scratch.

Sometimes less is more. Could McDonald’s menu be getting too cumbersome to allow for fast service? Breakfast at McDonald’s would not be a first choice unless I am running late and have no time to go elsewhere. What follows might be an overhaul of the menu to allow for better quality and service. What follows might be developing a better training and retention program. Is anyone listening? Probably not.

Geez, I love the thought of being in charge of McDonald’s, so allow me to indulge. With the resources they have, the first thing I would do is add a line of higher-end foods that someone like me would actually want to eat, besides breakfast. There are 30-35 million Americans with diabetes and no one is addressing this in restaurants on any large scale. I would also have a gluten-free/low-carb bun and tortilla that customers can ask for in lieu of the cheap buns, and offer the ability to ask for sugar free ketchup for their brand new sweet potato fries, which would be prepared in a separate fryer (or better yet flash-baked in ovens). All of these products currently exist, and yet it amazes me that they are not sold for people like me. A real high-end gluten-free/low-carb muffin, made with almond flour and agave or stevia would be fantastic, with real blueberries or strawberries in the batter to go along with a power shake that has kale, mixed berries and premium protein powder… Read more »
4
|
0
-   Share

McDonald’s no longer has a significant price advantage on its signature product (hamburgers) compared to chains like In-N-Out Burger, Culver’s and so forth. And it has a real problem in terms of food quality — not just the lack of freshness in the burgers themselves, but also the inability to customize. I know McDonald’s is trying to reconcile the quality issue with the “need for speed,” but some of its regional competitors have figured out that their customers (even at the drive-thru window) are willing to wait a little longer for better-tasting food. Until McDonald’s is willing to do what it takes to address this issue, nothing else (including breakfast) matters.

The introduction of all-day breakfast gave McDonald’s a nice year-over-year boost. However, when comparing sales to the first year of the introduction producing sales increase gets much harder. Customers are now very aware of the menu change and the sales increase from the change has occurred. Now sales comparisons are based on two like menus.

All-day breakfast is going to be the QSR norm soon. This will continue to build QSR sales as a group — but less of the benefit will accrue to McDonald’s as others join the game. McDonald’s seems to be choosing the “supermarket strategy” to QSR — that customers will go where they can get just about anything anyone in the family wants instead of the “best” burger or chicken or fish chain. That has worked for Kroger for a long time. But I’m not so sure it will work in any restaurant market that has a population large enough to support something other than the local diner.

Eventually the sales increase will flatten out and McDonald’s will have to find another way to increase same-store sales. When I was a kid, it was a family outing to go to McDonald’s after the softball game – or even after school. Figure out a way to increase the family spend – not just individual customers.

I visit In-N-Out Burger because I love a single item; the burger. I visit McDonald’s because of a time crunch/total convenience. McDonald’s needs an item or two that will compel visitors during each serving period. Without the introduction of some compelling items, McDonald’s is just the brand with market share waiting for competitors to eat their lunch. (I had to :).)

I would focus on the original products that made McDonald’s the market leader and focus on improving their quality. Make the core products better, fresher, tastier and reduce the use of heat lamps. Train personnel for a better guest experience; greet your customers, keep a very clean dinning room and bathrooms, maintain a good stock of the supplies and condiments for them and be professional — it’s QSR but it is also food.

The market dynamics (labor costs, health trends, taste profiles) are going to change, but the core function of a restaurant is constant. I would encourage franchisees to run a quality restaurant while I run an effective marketing campaign to drive traffic into the store. If we deliver on the brand promise, we will be profitable together.

The challenge for the CEO and Board of McDonald’s is to deliver on being a fast food provider for the masses in a world where growth is defined by specialization and personalization. What a phenomenal opportunity that would be! Keeping in mind the meta-narratives impacting consumer behavior and continued investment in technology, I’d address 4 areas long term: Invest in workforce and training; Create new yet more simplified menu options; Pivot to healthier ingredient sets and; Humanize the stores. 1. Workforce: Even if ordering goes fully automated via kiosks, smart devices, and so on, I’d want employee-customer interactions to be exemplary and enhance the customer experience 2. Menu: Add options for wide swaths of the population that have dietary/health restrictions: reduced sugars, low carb, non-dairy (coconut and almond based milks and yogurts), and gluten-free options. 3. Ingredients: Reduce exposure to GMO products wherever possible; provide clear easy to understand transparent ingredient lists; celebrate locally sourced products. 4. Stores: Humanize these a lot more. While each McDonald’s should have a common “store template” to communicate quality… Read more »
4
|
0
-   Share

I think all-day breakfast was a good move to slow the slide, but it is not a growth vehicle. Then again, is there one out there? They can’t be both fast food and fast casual. Trying to straddle the two will only hurt their business.

If I were in charge, I’d focus on bottom line over top line. (Okay, easier said than done for a public company.) I’d also focus on my core customer, and how to get that customer back in one more time each week or month.

Just the stat that only 20% of Millennials have ever eaten a Big Mac should send a thunderbolt through Oak Brook. McDonald’s should absolutely examine every aspect of the business, along with a SWOT comparison to competitors, to determine the way forward. It’s a big job — but it’s necessary!

Braintrust
"If I were running McDonald's, I'd re-examine everything."

"With the resources they have, the first thing I would do is add a line of higher-end foods that someone like me would actually want to eat..."

"McDonald’s seems to be choosing the “supermarket strategy” to QSR..."