What is BK up to with its new burger/burrito mashup? 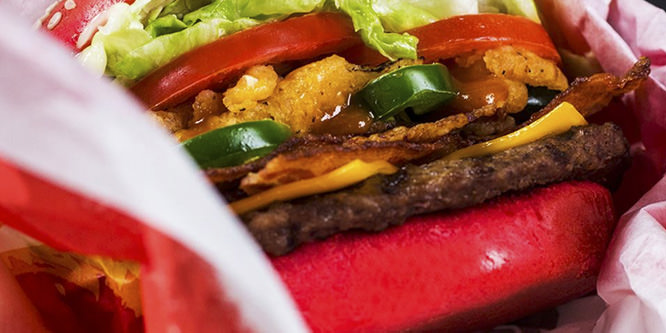 Is the Whopperrito a sandwich idea that is too silly to succeed or just crazy enough to sell in a big way? Burger King, according to reports, is testing a new menu item that includes the ingredients of its Whopper sandwich wrapped in a flour tortilla instead of on a soft sesame seed bun.

Burger King has been pushing new Whopper products onto its menu of late, including last month’s debut of a Whopper Dog that has all the ingredients of the standard sandwich but on a hot dog.

In March, the chain rolled out a limited edition “Angriest Whopper” sandwich that included jalapeños and a spicy sauce on a red bun that had hot sauced baked in. A standard “Angry Whopper” that includes the standard Whopper bun is a permanent item on Burger King’s menu.

DISCUSSION QUESTIONS: Is Burger King just spinning out standard line extensions with its recent Whopper-based rollouts or is something more creative going on? Will spicier flavors and nods to Mexican or other international foods become more common in U.S. foodservice over the next several years?

Please practice The RetailWire Golden Rule when submitting your comments.
Braintrust
"BK has been floundering for years — maybe a Flounder Whopper would work!"

"Korean tacos anyone? Serrano topped sushi? Chipotle humus? Ponder this as you snack on your Sriracha potato chips."

"Burger King may be late to the party, but they needed to make the addition..."

11 Comments on "What is BK up to with its new burger/burrito mashup?"

Burger King has always had its niche with flame broiled burgers. However, we know that a great percentage of Americans are of Latino heritage. McDonald’s, Carl’s Jr, and Hardee’s have all added menu items to compete with Taco Bell. Burger King may be late to the party, but they needed to make the addition and they did it with a minimum amount of change to their current product line. I am looking forward to trying one.

Someone once told me when you got nothing, you got nothing to lose. That’s how I see BK. I have long written off BK. They are not Red Robin, Five Guys, or In & Out. No matter what they put on the menu, I will still say to myself if I walk into BK “this is going to turn out badly for me.” BK can make a good Whopper so long as it’s made correctly, not a pile of goo in a wrapper. It seems once a fast food restaurant varies from their signature item that made them successful, they more often than not fail. Take a lesson from Chick-fil-A or In & Out Burger. Stick with what you do best.

Burger King is trying to increase the favorite Whopper by adding line extensions to it, and I think it should build more sales. AppleBees has a quesadilla burger, and the Whopper version looks pretty good. Consumers love to try new fast food items. If the quality stays high, then it will become a fixture in all their outlets. The hot dog they came out with seems to be doing quite well, so who knows, could a Bison Whopper be next for the healthy eaters?

BK has been floundering for years — maybe a Flounder Whopper would work! Seriously, BK has always had a potential competitive advantage. Remember the slogan “Broiling Beats Frying”? However, the company never fully pursued this niche. Instead it has relied on a variety of menu du jour items, with hot dogs, and now the burger burrito mashup the latest options.

Like in sports, you can choose to play either football or baseball. However, you can’t play them both at the same time on the same field. The latest ventures will lead to neither game winning touchdowns nor home runs.

BK is taking a leaf from the Reality TV Book to become relevant to consumers. Clearly burgers, fries and burritos aren’t health food, so they are trying outrageous combinations to claim a market niche. Wonder if they serve sides of Rolaids?

Testing new flavors has value, but the flavors need to appeal and the quality has to be at least acceptable. The unusual quality and media attention may get people to try once. If the taste and quality is not good repeat sales will not keep up. BK will need to keep trying or just quit.

Players in the fast food space must innovate in order to survive. Fresh new ideas featured on the menu gives the brand a differentiated position vis a vis McD’s and Wendy’s plus regionals. The Chipotle “hit” yields new interest in what other fast and fresh providers can offer to satisfy the American taste buds. It cannot be lost on BK that more and more additions to the menu place additional pressure on the back-end which ultimately impacts time to fulfill the order. The bigger challenge in the space is bundled meals and the price point. Profit margin on bundled menu items is a concern in the near term, but the bet is that this will help with market share and lift visit frequency.

“Is the Whopperrito a sandwich idea that is too silly to succeed?”

Much like Taco Bell, which constantly offers up reiterations of the same few ingredients and pretends it’s something new, BK seems fond of these Godawful conglomerations — didn’t they have some kind of pancake/omelet thing a few years ago? If people want a burrito, then they’ll go somewhere where they can get a real one. BK needs to stick with what it does best — “least badly”? — improve upon it, and stop wasting time and effort on these distractions.

The challenge for Burger King is their kitchen. It lacks the versatility for more innovative products, so they are limited to line extensions of their key products.

Spicier foods are now part of the American palate, and particularly of the QSR heavy user, so in theory this is a good idea. Burger King restaurants in New Mexico have the Green Chile Whopper — which is quite savory, so the flavor combinations should work very well.

The country’s flavor palate is a reflection of the country’s population. The traditional “American food” of hot dogs and apple pie, defined by the German heritage of the country a hundred years ago, will be replaced by foods representative of the cultural plurality that defines our country. Korean tacos anyone? Serrano topped sushi? Chipotle humus?

Ponder this as you snack on your Sriracha potato chips.

I would say that the real benefit of this type of strategy is to create an organization that can handle variety, deliver it effectively, learn and retool. Creative, odd, colorful choices draw attention and break through a bit of the noise. There is a lot of competition in the fast food space and some rather boring and predictable menus. Does BK have the ability to deliver on the promise of the agile menu? They had better learn to or only their competitors will be eating their lunch.

Burger King is going through some sort of transformation. But who knows what it is or where it will end. The hot dog? What is that? I was going to get one, then saw it and decided it was nothing like a hot dog I usually eat. I can’t imagine what this next new product can be or who it will attract. Count me in the NO column. I hope they can decide who they want to be before they become the fast food version of Kmart.

Braintrust
"BK has been floundering for years — maybe a Flounder Whopper would work!"

"Korean tacos anyone? Serrano topped sushi? Chipotle humus? Ponder this as you snack on your Sriracha potato chips."

"Burger King may be late to the party, but they needed to make the addition..."