What would Shein stores do to the U.S. retail apparel market? 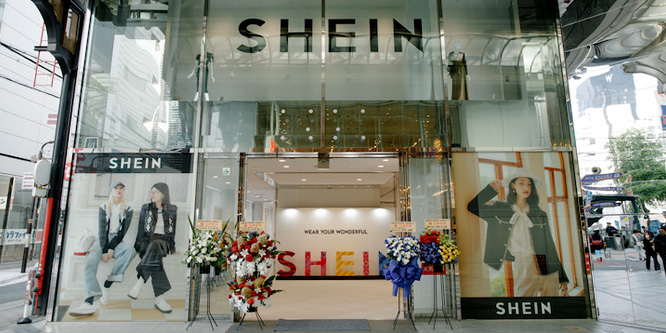 Shein is moving closer to launching its first permanent brick and mortar store in Tokyo.

The store, which measures about 2,163 square feet over two stories, will open November 13 in the city’s Harajuku fashion district, according to reports from Reuters and Inside Retail.

Shoppers will be able to look through displayed merchandise and try on clothing in the location’s three dressing rooms. Those looking to make a purchase will use Shein’s app to scan QR codes attached to individual items and place their orders online for home delivery. An Instagrammable fashion booth is designed to encourage customers to make a social media record of their time spent in the store.

Shein is also using a pop-up strategy to connect with Japanese customers. The fast-fashion giant currently has a temporary store in Osaka that will stay open until January 27. The pop-up, which features men’s and women’s clothing as well as products for home and pets, has about 800 items on display.

The retailer has also deployed pop-ups in the U.S. A temporary shop that opened for just two days in San Francisco this summer made headlines after the resale platform thredUP called for it to be boycotted over Shein’s business model, which “is the antithesis of circularity.”

Concerns over Shein’s environmental impact and the treatment of workers producing its goods in China have not slowed the fast-fashion giant’s growth trajectory. The Wall Street Journal reports that Shein’s global sales are forecast to reach $24 billion this year, up from $16 billion in 2021, moving the Singapore-based company past H&M and closer to Zara as the top-selling fast-fashion retailer.

Both H&M and Zara operate online and physical stores in the markets they serve, whereas Shein has grown with a digital-first approach supported by pop-ups. The company, which has been profitable since 2019,  has the most downloaded retail app in the U.S., the biggest of the 150 markets around the world that it serves.

Shein claims that it sells 98 percent of the merchandise it churns out. The company quickly produces small batches of merchandise using a network of 3,000 manufacturers.

DISCUSSION QUESTIONS: How likely is Shein to open showroom stores in the U.S. similar to the one it is opening in Tokyo? What would a more robust physical presence mean for Shein’s business in the U.S.?

Please practice The RetailWire Golden Rule when submitting your comments.
Braintrust
"I’m not sure consumers have started liking this type of retail model more than they used to."

17 Comments on "What would Shein stores do to the U.S. retail apparel market?"

Not a bad idea, but not a great idea either. Fast fashion is about fast fixes and, in the U.S. at least, most people want to be able to go into a store and walk out with product. This kind of concept will increase the visibility of Shein and aid overall sales but it simply won’t compete well with the likes of other super-cheap fashion players, such as Primark, which are expanding via full-service physical stores. And that’s before you factor in the cost of operating stores which simply exist to drive sales online rather than generate money themselves.

Showroom stores! That is exactly what they are opening in Japan. Strategically, the idea behind this store is to expose the public to what Shein offers and get the buyer into the online buying mode. Once a customer makes their first online connection with Shein, there are sure to be continued sales.

Will they open in the U.S.? I don’t see why not. The reach they can generate on the fashion/tourist streets will likely provide a rich new set of customers.

Shein has the online business model down pat. Now is the time to broaden its base.

Great points Gene! Fast fashion at reasonable prices is a strong segment and minimizing the space will make the footprints more economical. As a showroom approach, it would be great to see virtual mirrors so the showroom would only need to inventory one color for each style and size and the virtual mirror could display the color options.

I like your idea of virtual mirrors. It is the perfect strategic complement.

And let’s not forget to mention the Instagrammable fashion boot — just brilliant.

I’m not sure consumers have started liking this type of retail model more than they used to. Other brands have tried brick-and-mortar stores where items can’t be brought home, and they haven’t resonated with shoppers. If Shein begins allowing for immediate product acquisition, I fear the retailer will end up doing very well in brick-and-mortar. If they maintain this approach, I’m not so sure. And I say that I fear them doing well because they are not the direction fashion should be moving, considering their unsustainable business practices.

Based on what’s been in the news about Shein one would think that U.S. stores would not be met with positive vibes, but I doubt that will be the case. The lure of cheap clothing always seems to win out over doing what is responsible.

Still, American shoppers want instant gratification. Isn’t that the whole point of going to a store? Everything isn’t always about Instagram.

Shein will most definitely roll out stores in the U.S. Whether pop-up or permanent, Shein stores will disrupt business for H&M, Zara, Forever 21, and many others. Shein’s price points basically scream, “No labor costs were used in the production of this clothing.” Considering the treatment of their workers, it almost feels unethical to buy from the brand. Right or wrong, bargain shoppers will use selective ethics and buy from Shein.

Now, Shein’s digital-first concept is definitely a winner, but their showroom concept won’t meet the need for instant gratification of some shoppers. Waiting for delivery is going to limit sales. Their return policy — subtracting “shipping” fees for returns — will be a tough sell in the U.S., although at their price points it will probably have the effect of dissuading shoppers from returning items. Being able to return to a store easily and making a connection with employees would solve most of their problems.

Tokyo is the fashion litmus test. Do well there, and my money is that the first U.S. store will be in NYC.

H&M, Zara, Fast Retailing’s new GU concept — the fast-to-faster fashion field is getting more crowded by the day. Shein might grab a bigger piece of the pie through a showroom concept but heaven forbid it displays deep assortments of its throwaway wares.

This model hasn’t done so well in the U.S. yet. It feels like consumers that want fast fashion, want it fast. For U.S.-based retailers watching this, my advice is to make sure the tools are in place to measure lift from the brick-and-mortar location on overall business to get a clear view of the ROI for this sort of store. That’s going to be determining factor for whether or not American retailers embrace this model.

No doubt physical retail is the right move for any brand looking to deepen their relationship with the customer. Shein will target the U.S. – it’s just a matter of where and when.

The app is one of the most popular across the younger generation and it’s only growing. The U.S. customer will embrace Shein but the right location will be key. High tourist areas that are accessible to the fashion forward as well Gen Z will need be top-of-mind.

Sustainability and ethical production may be top-of-mind for many, but the Shein customer is looking for ultra-fast fashion that is Insta-worthy and won’t break the bank.

Showroom-like stores and connected retail digital experiences are emerging models in the U.S. market. However sustainability matters and fast fashion, despite its affordability, has lost its luster in the U.S. Operating physical retail stores in the U.S. is challenging, with high operating costs, labor considerations, and all related supply chain disruptions.

Shein’s showroom experiences, integrated QR capabilities, and micro-fulfillment services are compelling. However a seamless entry into the U.S. market will be challenging and congested, with many established players such as Forever 21, Zara, and H&M dominating the fast fashion scene. These developments, coupled with a more conscious consumer willing to spend more on more sustainable products, have led to a downtrend in the fast fashion segment.

It doesn’t seem very sustainable having shoppers travel to your store, only for their orders to be shipped to them from a different location.

Well, the product has to be shipped from the factory in any case, so the energy nets out — goes to your apartment instead of a shop. And shoppers won’t be going to Harajuku solely for the purpose of visiting that store, so there’s no extra energy involved there. Hate to see the quirkiness and small-business focus of the neighborhood go away, but block by block they’ve been commodifying it for ten years now….

Very likely, and very little. I’m not sure whether it’s the guy in me talking, or just the fashion illiterate, but my main response to this is “Who?” While I wish them well, out of all the millions of things the county could use right now, I would place another “fast fashion” retailer as second or third … from the bottom.

Funny, today we have a thread on plastic waste and that “big problem” then in another thread we wondering how a fast fashion concept can realize its expansion potential in the US.

Fast fashion, and the waste involved with it….

One of the differentiators for Shein, which is an advantage, is the small batch production. Smaller batches keeps inventory and costs low, but it also ensures customers feel if they don’t like the current style choices, they can look forward to next week’s options. Constantly changing product merchandising and limited availability alone will keep shoppers interested and engaged.

Braintrust
"I’m not sure consumers have started liking this type of retail model more than they used to."