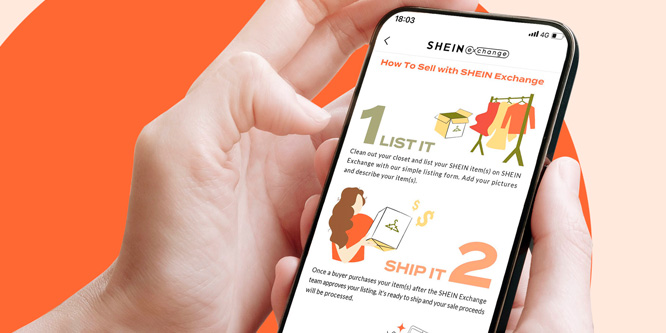 Fast-fashion giant Shein is the most downloaded retail app in the U.S. despite operating a business model that critics claim is helping to push the Earth towards environmental calamity. Will the introduction of Shein Exchange, a peer-to-peer resale feature integrated into the app, help the Chinese company push back against some of the criticism it faces?

A company press release said that the development of the Exchange came about as a result requests from its fans on social media. The Exchange was created with Treet, a resale technology platform used by other retailers.

Shein is piloting the Exchange in the U.S. with plans to roll it out to other global markets in 2023. Shein asserted that it is committed to reducing waste and offered as proof it, being among the signatories to the World Circular Textiles Day coalition that seeks to achieve full circularity by 2050.

“The goal of Shein Exchange is to make resale just as easy and convenient as buying something brand new, while also igniting a cultural movement of circularity within our own SHEIN community,” said Adam Whinston, global head of ESG at Shein, in a statement. “We’re calling on our community to mobilize and keep previously owned clothing in circulation for as long as possible. By harnessing the reach and the influence of our growing community, we believe that shopping resale can become the new normal in our industry.”

Critics may well dismiss Shein’s news. ThredUP in June sent push notifications to customers in San Francisco asking them not to shop at a pop-up Shein opened for two days in the city.

Shein may have another public relations issue to contend with. An undercover investigative report by Channel 4 and The i newspaper in the UK found that factory workers in China frequently have to put in 18-hours days with only one day off per month. The workers are paid about four cents a garment, earning about $556 a month.

Shein told Business Insider that the report, if true, would show a violation of its code of conduct and result in the termination of its contract with the supplier.

DISCUSSION QUESTIONS: Will Shein’s new resale platform mute its critics? What do you see as the pros and cons to Shein’s reliance on peer-to-peer transactions through its exchange?

Please practice The RetailWire Golden Rule when submitting your comments.
Braintrust
"Real change is the best brand builder in this case."

"SHEIN’s other superpower besides its tech is the sense of community it has created and that will be the other main driver of this program’s success."

Based on that new report from the UK, Shein’s critics should be even more outraged. Selling used goods won’t mask what is happening to its workers in China.

This will do little to mute critics, mainly because their charges against Shein are deep rooted and touch on many things such as the treatment of labor, working conditions, and environmental policies. Adding a resale site does not remedy all issues. That said, there is a very big difference between critics and customers and I suspect Shein is thinking more about the latter and how it can engage them more with this initiative.

There has been some very disturbing news out of Chinese factories lately, including the use of slave labor. Whether this will diminish the market for their innovative designs remains to be seen.

Is the Shein business model the antithesis of sustainability? Of course, it is. But what makes their business model work? Should a company not provide what the customers want?

Shein’s resale platform is a move in the right direction. My question is, will the Shein customers even care? They buy Shein as a disposable product. There is even a question as to if the products would last through circularity.

Sometimes you just have to do what’s right.

One would hope so. But for Shein, what is doing what is right means no company. This is a strategy that Shein chose. Would I if it were my company? No! But, they determined their market and have been hugely successful. They knew exactly what their customers valued.

The business model seems to be about consumption above all other considerations. The sheer number of styles introduced. The payment and treatment of workers. None of that adds up to anything remotely resembling responsible social behavior. And then to suggest that going into the resale business makes them good corporate citizens? Resale will ultimately serve us all very well. Resale as a PR or marketing handle shouldn’t be allowed to gloss over other gaping business model flaws.

According to a new study we did, EVERY brand should do resale, for several reasons including, but not of utmost importance to consumers, the environment. So I don’t think it’ll change perceptions, but I do think it’ll help revenue and foot traffic, to say nothing of being early in a pervasive trend. They’ve got to solve their PR problems in a much different manner than resale, as in; better to rethink their process and just change it. Real change is the best brand builder in this case.

No. Shein’s issues seem to be endemic to their business model. Their critics will view this as greenwashing at best and mostly just ignore it altogether, given the scope of the allegations against them in the press.

Shein’s new resale platform will not mute critics. In fact it will do the opposite. This strategy will drive more backlash and further investigation into Shein’s unethical practices – from treatment of its workers to environmental impact to overproduction.

Resale is a marketing tool for Shein to hide the real truth of how the brand goes to market and creates product. The fact that it is the most downloaded app in the U.S. also tells us that customers don’t care about Shein’s practices and only care about buying more “stuff” at a price they can’t refuse.

There’s a lot to unpack here, including very disturbing allegations in the new report from the UK. I suspect critics will likely look at this as greenwashing a systemic problem baked into their business model: they thrive by generating 20+ inventory turns a year. Generating that kind of turn demands a constant flow of new value-priced assortments. I have to say that when I do the math, I can’t compute any degree of circularity that can compensate for that much fashion churn.

No it won’t. In fact if anything, it may inadvertently give them more ammunition because the market is now flooded with old goods and new goods. I guess — if there are pros — it is a decent exercise in community building and consumer engagement. But the cons far outweigh the pros.

This won’t mute its critics, who know the company’s toxicity runs deep. The problem is that its customers are blind to the issues with how the business is run, and they will see this the same way that they see the $7 tank tops: another fun reason to shop there. Emphasis on the word fun because there’s no doubt that the technology behind the experience will be sophisticated, engaging, and more interactive than a ThredUP, for example – where you could already be buying secondhand SHEIN and paying peer-to-peer. SHEIN’s other superpower besides its tech is the sense of community it has created and that will be the other main driver of this program’s success.

Finding creative ways to deal with returns has very little to do with sustainability. Shein needs to learn one thing very clearly: greenwashing is dead. Consumers are all more educated now.

Whether branded resale platforms deliver any significant level of sales remains an unknown. That fact makes the entire effort appear more dedicated to silencing critics than to achieving serious change – even though the only way to silence critics here is with change.

Put me into the category of skeptical.

Fast fashion retailers like Shein introduce thousands of new products every day. Shein has faced criticism for a variety of reasons. They’re also ill-famed for copying other brands’ designs and offering them at a lower price. Regarding their initiative, I don’t feel it can make up for their shortcomings. Moreover we cannot overlook the carbon footprint that handling exchanges will leave behind.

Braintrust
"Real change is the best brand builder in this case."

"SHEIN’s other superpower besides its tech is the sense of community it has created and that will be the other main driver of this program’s success."