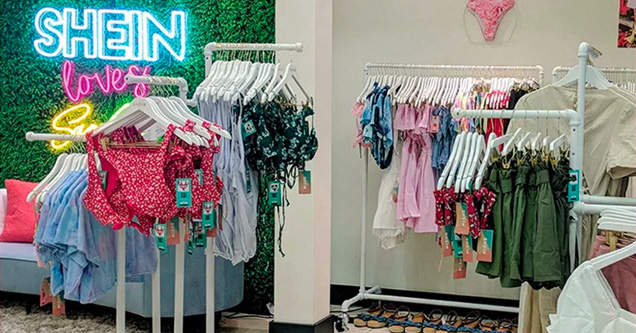 Shein has become “the most searched-for (apparel) retailer” and the most downloaded app in America, according to UBS Evidence Lab’s Global App Monitor, even though it does not operate any physical stores in the U.S. The Chinese fast-fashion giant has also gotten on the wrong side of thredUP, the largest online consignment store.

ThredUP last week sent push notifications to customers in the San Francisco Bay Area asking them to pledge not to shop at Shein’s pop-up shop located in the Embarcadero Center between June 24 and 26. The resale site also offered new customers taking the pledge 40 percent off their first purchase plus free shipping for not shopping at the pop-up.

Erin Wallace, vice president of integrated marketing at thredUP, told RetailWire that the campaign was about something bigger than targeting Shein.

“It’s about educating and helping consumers,” Ms. Wallace said. “As one of the world’s largest online resale platforms, we’re on a mission to fight fashion waste and inspire a new generation to think secondhand first. Shein lists thousands of brand-new styles every day, encouraging endless consumption and creating disposable fashion waste. Their business model is the antithesis of circularity.”

ThredUP, however, is not looking to get into the practice of publicly calling for boycotts of retailers, preferring collaboration over confrontation.

“We value our relationships with retailers and believe that the entire industry benefits when resale and retail work together,” Ms. Wallace said. “Our ultimate goal is to extend the life of as many clothes as possible and keep items in closets and out of landfills. ThredUP’s Resale-as-a-Service platform enables resale experiences for some of the world’s leading retailers in service of that mission.”

ThredUP did not expect to shut out Shein’s pop-up shop with its campaign in San Francisco, but it is looking to change how consumers and the merchants that serve them think about apparel.

“Our lofty goal is to displace the production of new clothes such that, in the future, we collectively reuse more clothing than we produce new,” she said. “We’re glad to be sparking conversation and providing education around how harmful brands like Shein truly are for the planet. We believe that individual actions can make a collective impact; if we can convince even a few fast-fashion shoppers to make the switch to thrift, we’ll be that much closer to creating a circular future for fashion.”

DISCUSSION QUESTIONS: Do you see a role in retail marketing for companies to compare and contrast their practices with rivals based on environmental, social and governance grounds? Do you see risks for retailers and brands taking strong ESG stands at a time when society is being further polarized on issues such as reproductive health, firearms, the environment, et al?

ThredUp stock is down by -89.65 percent over the last 12 months. InvestorsObserver’s proprietary ranking system, gives TDUP stock a score of 30 out of a possible 100. To the casual observer, this is PR for a company in trouble. I’d bet more people found about about Shein as a result. Trying to take a moral high road of sustainability with all the reverse logistics needed for resale seems disingenuous.

Unlike many political campaigns that thrive on maligning the other candidate or party, these differences should highlight the positive of each and not the negative of the other. Consumers will know the difference.

There is ample research to support a growing and significant role for consumer-facing brands (including retailers) to address issues that are highly relevant to Gen Y and Gen Z. This is directly related to the idea of stakeholder capitalism and by extension, stakeholder loyalty.

ThredUP is taking an aggressive position but presumably it understands its corporate mission and its customers, as well as other stakeholders.

Like any initiative with the potential for upside reward, there are always risks. The risks include both doing nothing and doing something and it’s a function of the authenticity of the company’s values, brand positioning (including purpose, if there is one) and leadership.

Compare and contrast is the whole premise of shopping. ThredUP is simply taking shopping to a new level. ThredUP wants to sell “think secondhand first” as their primary brand promise. So there are a whole bunch of brands that they are inviting themselves to be compared to. Shein is providing them with a very handy placeholder for all of those other brands.

This is a terrible strategy. It’s one thing to promote values and take a stand against practices you are against. Patagonia is masterful at this. It’s quite another to ask your customers to boycott a competitor, no matter how egregious their operations might be to you. ThredUP may hope that their actions are perceived as educational, but I believe they will come across as petty and vindictive. Calling out competitors by name almost always backfires. This is pouring gasoline on a potential backfire.

By the way, I’m sure PLENTY of their customers will sign the pledge, get the discount, and continue to shop wherever they want. This is not good.

As predicted, the uber fast, super cheap fashion wars have commenced, with sustainability shade as the weapon of choice. ThredUP and Shein are transforming the fashion game in entirely different ways. Shein is a seemingly unstoppable juggernaut yet environmental concerns and UFLPA enforcement threaten to slow its roll. ThredUP has a solid sustainability promise and has every right to sing it from the rooftops to draw a contrast with Shein and other faster fashion rivals. A boycott may be a bridge too far, yet some consumers may see it as an example of ThredUP’s passion for sustainability.

I think it’s good to know who you’re serving when you pay money to a retailer. Are there risks? Sure. Nothing worth anything is risk-free. Also, while it is true that we should accent the positive, there’s so much greenwashing and BS around that sometimes you just have to call a competitor on it.

Sidebar: This is one reason why Kellogg split into three companies. Finding out the “natural” and plant-based brands the company owns sort of tainted those brands when you discover the company also owns breakfast sugar — uh, I mean cereal.

Let he who is without sin — I don’t know, that’s opening a can of worms if you ask me. It’s one thing to say you’re better due to pricing or quality, but it’s easy pickings to find some kind of sustainability flaw in any company. Walmart is one of the most environmentally conscious companies in retail, but who would know as compared to Patagonia or REI, they’re slackers. Just tout your own efforts and let the chips fall, I’d say.

An effective message should not have to rely on punitive practices. A three day boycott will not succeed, but sure a few apparel buyers might shift their preferences. ThredUP should aspire to do better, be better and show the way through their own best practices.

I suspect many will sign the pledge, order from ThredUP, get their 40 percent, and shop Shein.

Cynicism aside, of course, there is a role for companies to compare and contrast their practices versus the competition, if it is a fair and accurate comparison. Environmental, social and governance issues are serious topics today. Many companies have based their mantras and their business plans on these issues. It is sometimes their reason for being.

Too many companies have mission statements that are meaningless and even laughable. If social issues are part of the mission, say it loud. Will there be a trade-off in customers? Certainly. Will it bring in new and loyal customers who appreciate what they stand for? I suspect YES.

Whether ThredUP likes it or not, Shein has a right to do business the way it wants to do business, and shoppers have the right to choose the retailers they want to buy from.

With all this going on I am surprised no one has brought up the notes Shein workers are leaving on labels and in packages asking customers for help. That’s the real dilemma for me.

I do not think that there has been a time that retailers have “worked together.” I think it is a bad idea to call out a retailer and tell customers not to to do business with them. Instead make your business better and exceed the customer’s expectations, and let the chips fall.

And when you think about it, competition is like weeds. You stop one and another pops up. It has always been that way, and it will not change.

It is great that companies like ThredUP are standing up for what they believe in and it has demonstrated the company prefers collaboration over confrontation. The problem with ultra-fast fashion is the surging consumer demand. Shein is meeting a need in the marketplace which will only grow as discretionary spending is squeezed by the grip of inflation. The only way to reduce waste and change consumer behavior is through education which is what ThredUP tries to do. In this case, the Shein pop is on the home turf of ThredUP which may have raised its hackles prompting ThredUP to use this type of marketing, which will most likely backfire and is not a sustainable tactic (40 percent off).

This communication might seem valuable to a subset of shoppers and send the rest to Shein. Bad idea.

Shots fired! This is the name of the game, but if you’re going to start throwing stones… Potential backlash could be a callout that Shein is one of the best options for those with economical constraints as they offer truly democratized style. Not every consumer can afford to be green.

Seems more like desperation than a winning strategy. Look, there’s always competition around every bend, but wasting time and capital on dart throwing rather than looking inward and investing in new innovation is not a good long term formula.

ESG is retail’s version of quicksand. If you can tap dance over it, you might be fine. Plant your feet and take a firm stand and odds are sooner or later you’ll slowly start sinking an inch a time until you die. I think it’s almost always a dangerous practice to directly attack a competitor, especially on what – from a consumer’s point of view – appear to be abstract issues. Polarization is one problem, but the fact that environmental science evolves and is often misreported by the media just complicates the issue.

Asking your customers not to buy from another retailer just highlights that you haven’t educated your customers on why you’re the better choice. Leave negativity to the political ads and make consumers fall in love with your brand for who you are and what you represent. Calling out competitors is just a negative, short-lived stunt with no upside.