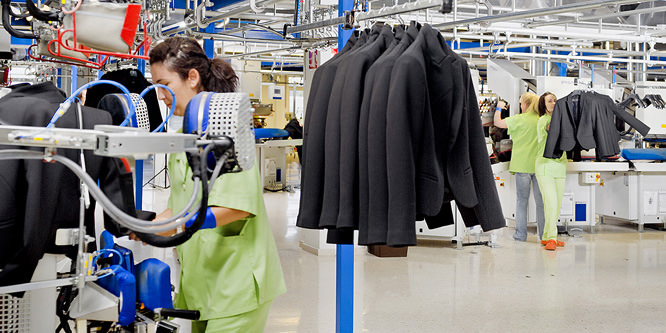 While management at other apparel retailers have put forth all kinds of theories as to why their businesses are struggling, Inditex, the parent of international fast fashion chain Zara, reported an 11 percent increase in same-store sales with total revenues jumping 16 percent for the first six months of the year.

Zara’s fast fashion production model is typically given credit as the primary factor in its success. The chain, which accounts for roughly two-thirds of Inditex sales, manufactures new clothing in smaller lots in its factories, primarily in Europe, that are closer to stores, rather than sourcing larger inventories of apparel from suppliers in Asia.

The chain’s growing e-commerce business is also credited with helping it achieve growth levels that exceed its rivals, including other fast fashion chains H&M and Primark. What’s not clear is just how big a contribution e-commerce is making to Zara’s success. Inditex does not break out sales registered online from those in its physical stores.

In June, chairman Pablo Isla touted the company’s omnichannel capabilities on an earnings call with analysts.

“We operate a global sales platform that fully integrates stores and online and offers huge growth potential,” said Ms. Isla. “Our business model combines stores and digital seamlessly, and we are ready for the opportunities that this brings with current and new customers.”

Inditex reported that it saw its sales revenues, including stores and online, increase 13 percent in local currencies between Aug. 1 and Sept. 18.

Articles on both the Bloomberg and Wall Street Journal sites suggest that a shift to more online sales may have something to do with the company posting a net income gain (eight percent) that trails its jump in revenues.

Inditex’s gross margins actually declined one percent for the first six months of the year, which could have something to do with higher costs related to a market-by-market rollout of e-commerce operations across the globe. Zara, for example, will launch online sales in Turkey beginning next month.

Lower margins could also point to greater discounting to stay ahead of its rivals. Regardless of the reason(s), it seems like nitpicking when the business is posting the types of results it has year-to-date.

DISCUSSION QUESTIONS: Why do you think Zara has managed to grow its business at a double-digit pace when so many other retailers have struggled to post any gains? Has Zara created a sustainable point of difference for itself compared to other apparel retailers competing for the same customers? What can/should other apparel retailers do to close the gap?

Please practice The RetailWire Golden Rule when submitting your comments.
Braintrust
"Today's office worker wants something in her closet that doesn't look like everything else. She can find it at a reasonable price at Zara."

This ties in neatly with yesterday’s discussion on Gap in which opinions about whether apparel is “trendless” got heated. Of course trends EXIST at any given time and retailers act upon them. The question is whether consumers feel as compelled as they once did to act upon trends — to identify and purchase “must-have” items on a meaningful scale and on a regular/seasonal basis. The answer is, sometimes they do if the stars line up. A trend hits social media (coverage of a runway show, perhaps), lots of sharing and commenting, Zara clicks its fast-fashion supply chain into gear and the items hit Zara stores pronto at a crazy great price. Boom! Very different from when retailers dictated fashion, bought way ahead, stocked the shelves, advertised the latest and consumers bought in droves (or not, yikes). Zara is geared for the, let’s say “trend-challenged” times!

Aren’t they up against soft comp sales last year? They were opening a lot of stores and announced early this year that they were cutting back on store openings.

Our more casual workplace seems to have stumped some of our traditional outfitters. Zara has stepped outside the lines to create fashion that’s a little more flashy (see the metallic pleated skirt), a little different (flowing striped crops) and a little younger (slouchy sweaters in interesting colors). Today’s office worker wants something in her closet that doesn’t look like everything else. She can find it at a reasonable price at Zara.

Exactly! Zara has figured out the intersection of unique style with affordable pricing.

Zara’s success is due to two main factors. The first is a super-sophisticated fast response inventory system that responds to demand (from factory to store) within only 15 days where other retailers typically take 6 months. As a result, Zara was reported to get 85 percent of the full price on its clothes, while the industry average is 60 to 70 percent.

The second success factor is a vertically integrated supply chain. Zara owns its stores and sells very little through intermediaries. As a result, its profits are not squandered by online-offline price wars and its physical stores are not collapsing. Thus they are able to offer good customer service.

In my view, the takeaway for brands is to integrate their supply chains so they are not adversely affected by overly-competitive retailing activities. As a second example, Lululemon Athletica does not sell through intermediaries and achieved great inventory management efficiencies by using an integrated supply chain.

Zara and other fast-fashion retailers have taught their customers to buy it now or it won’t be there tomorrow. Hence, 85 percent of full price. The rest of the retail industry has taught customers to wait until tomorrow because it will be on sale, and if you wait until two days from now the sale will be bigger.

I agree with you Gene. However, it is not the retailers’ fault. They are just responding to outdated incentive-schemes laid out for them by brands.

The solution to the problem MUST lie with a new business model for retail that includes a COMPLETELY different contract-design between supplier and retailer. By the way, Zara implemented only a second-best solution. It is a huge handicap (and mistake) to shut yourself out of the main online markets (e.g., Amazon).

Zara’s mastery of supply chain to exploit trends has long been noted, but their targeting of a fairly broad customer base less so. They seem to straddle the sweet spot between Forever 21’s focus on what used to be called the “junior” customer and H&M’s emphasis on more wear-to-work clothes.

As to store openings — at least in the U.S. — Zara has been more deliberate than its competitors, so its comps may reflect that it is not suffering from the same square footage overload as many other omnichannel retailers right now. But — as usual — it really comes down to merchandise content.

Not unlike the way they want to consume their media in small bite-sized “snacks” because of their limited attention spans, Millennials and Generation Z shoppers purchase experiences rather than products. Zara’s ability to manufacture smaller lots of apparel and place them in their stores and online commerce channels more quickly may account for their success. This quick turnaround offers more styles more often, through online and store channels, all at an attractive price and caters very nicely to the expectations and delight of their shopping audience. Other apparel brands should pay attention — perhaps the executives at Gap from yesterday’s post should pay particular attention!

The interesting point for me is how its supply chain affects its online sales. Few retailers are able to integrate their brick-and-mortar operations with their online ones so that their own site is the preferable online choice. (Rather than them just clicking on Amazon.) Having a state-of-the-art supply chain allows Zara to have a retail site that takes advantage of trends just as quickly as its stores.

One caveat, though. Zara needs to be wary of discounting so much. You teach your audience to shop on price when you do that. When that happens, having the latest trends fails as a trigger. Consumers will just look for a better price. Keeping prices stable teaches audiences that Zara’s fashions have value.

Zara’s success is based on doing all the right things and doing them well. They understand what customers want and deliver it – the hottest fashion trends at a value price-point.

Operationally, they have a nimble supply chain that can offer the latest fashion trends as fast as any other brand and with an efficient cost structure. They get omni-channel and execute it well.

Other retailers should learn from the Zara model and emulate the aspects that can help them compete more effectively with Zara and other brands.

I see a lot of parallels between how Zara operates their business and successful software companies. The integrated supply chain mentioned here by others gives them a really fast iteration time on clothes, and that enables them to run small AB tests of different clothing in their stores. Their employees even have handheld computers that prompt them to report consumer engagement with test clothes back to HQ, much the way usage analytics are used to refine software. They’re treating clothing sales as a science and using the experimental method — it will be the norm in 10 years but for now it’s enough to have a significant advantage.

Braintrust
"Today's office worker wants something in her closet that doesn't look like everything else. She can find it at a reasonable price at Zara."