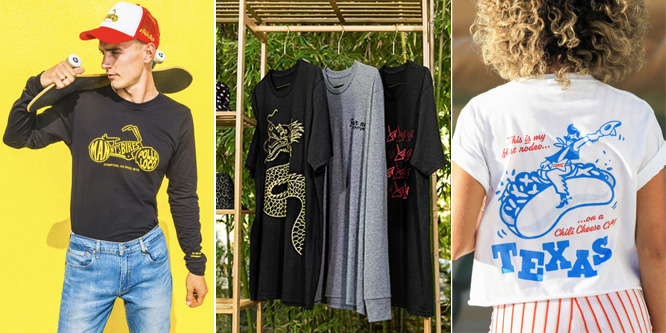 “We know that consumers are looking to connect with brands on a more experiential level, and we are launching PFCShop.com to meet that demand and integrate into their lifestyle in a new and meaningful way,” said Damola Adamolekun, CEO of P.F. Chang’s, in a statement.

McDonald’s, KFC, Popeye’s, Wendy’s, Burger King and other fast-food chains have found success with limited-edition streetwear and other items, often in collaboration with celebrities. Tim Hortons just partnered with Justin Bieber on a limited-edition offering of donuts and co-branded merchandise, including a beanie, fanny pack and tote bag.

Sonic earlier this year opened its first year-round online merchandise shop with a range of t-shirts tailored to local markets. Lori Abou Habib, Sonic’s chief marketing officer said in a statement, “We’ve seen incredible moments in which our guests have experienced life milestones both big and small, from weekend hangouts and driver’s license celebrations, to first dates and proposals, to weekly family nights. With these custom T-shirts, all Sonic guests can rep their local pride and encapsulate ‘THIS IS HOW WE SONIC’ in true style.”

DISCUSSION QUESTIONS: Why have retail merchandise offerings, whether year-round or limited-time, become such a possible tactic for fast-food chains and restaurants? Is the bigger benefit from these efforts commerce or marketing?

Please practice The RetailWire Golden Rule when submitting your comments.
Braintrust
"It’s only natural that restaurants would explore opportunities to add transactions to existing traffic, and at the same time create walking billboards."

"Whataburger is a cult in the South, and I will cop to owning a Fri-Yay Whataburger shirt, which I wear loud and proud!"

"Because it is a heck of a lot easier to offer merch than train crews or hold them accountable."

15 Comments on "What’s driving the merch opportunity at restaurants?"

Really? I have never seen someone in McDonald’s, KFC, Popeye’s, Wendy’s, Burger King, Chick-fil-A, Chipotle, IHOP, Krispy Kreme. Taco Bell, White Castle. Dunkin’, Pizza Hut, Little Caesars, Outback Steakhouse or Red Lobster apparel. Who is buying them? Who would even wear them? I hope someone is measuring the value of these endeavors because it sounds as if it is more trouble than its worth.

Maybe it is as simple as “McDonald’s did it, we better do it.”

Gene, in fast-fashion retailers such as Forever 21, Boxed Lunch, H&M, Zara, etc you can find t-shirts and accessories with Taco Bell, McDonald’s, and White Castle. Teens, tweens, and young adults are purchasing these brands, no different than if you see Coke, Corona, or Jeep t-shirts in the market.

That could be, but I have never seen somebody with one.

People gotta eat. Sometimes several times a day. So it’s only natural that they would develop a relationship with favorite food and restaurant brands. And it’s only natural that restaurants would explore opportunities to add transactions to existing traffic, and at the same time create walking billboards. And sometimes it’s not even about wearing the garments. My In-N-Out Burger and Sriracha sauce t-shirts are fun reminders of Father’s Day or birthday gifts over the years.

Now restaurants serve up merchandise to transform fans into walking billboards to keep their brands top-of-mind.

The commerce gains are negligible; this tactic is all about marketing mindshare.

Because it is a heck of a lot easier to offer merch than train crews or hold them accountable.

It’s all about a sense of identity and belonging. To identify with a tribe, a lifestyle, and make a statement about who you are or want to be. Sometimes it’s as simple as having a souvenir marking a special event at a particular restaurant. Post COVID-19 lockdowns, people are celebrating life and pursuing some normality. Buying retail merchandise at a restaurant fills an emotional need. Have we reached peak merch opportunity at restaurants? Maybe, but I wouldn’t bet on it yet.

In the Before Times, getting a Starbucks mug or tumbler with the local artwork was my little “trophy” for a successful trip. The shelf by my coffee maker at home shows locations from Guangzhou to Copenhagen! Eagerly awaiting those opportunities to return.

Agreed. I have mine from all over South America!

People are identity crazy. People will go to Florida for the winter and come back wearing a range of sweatshirts and t-shirts, all tailored to local markets and establishments where they have been. “Look how cool am!” And for businesses, those are great marketing endorsement messages! And even if you haven’t been there, you can probably buy the shirt on the internet! Then you’ll still be cool!

I have only noticed Margaritaville and Hard Rock t-shirts. If others see and notice the t-shirts then there is marketing value. If the t-shirts get purchased and not worn there is commercial value. With so many places now selling merchandise there should be a good test of whether the value is more commercial or marketing and whether the effort is profitable. Restaurants need to identify which consumers are interested in purchases and whether the effort would be profitable for them. The demand and profitability are likely to be different from one restaurant to another.

Whataburger is a cult in the South, and I will cop to owning a Fri-Yay Whataburger shirt, which I wear loud and proud! But I love Whataburger and wouldn’t wear it if I didn’t. In high school, I had a Coca-Cola rugby shirt that I wore constantly, but as I got older, I didn’t appreciate being an unpaid billboard.

I guess anything has the potential to be a “possible tactic,” but just because you can doesn’t mean you should. I’m not sure how large the market is for these merch offerings, but I am sure the potential varies drastically on a brand-to-brand basis. Put me in the camp that sees this as a marketing ploy.

I’d be careful about trusting too much in the marketing from these efforts. If they don’t succeed on profit, then they shouldn’t be followed.

There is a point well made in these comments, and it is that a sweatshirt or T-shirt will not sell a burger. True. But remember, it is all about branding, as in joining a club. If you see enough of them being worn, the bet is you will come to the point of trying them. There is no down side.

Braintrust
"It’s only natural that restaurants would explore opportunities to add transactions to existing traffic, and at the same time create walking billboards."

"Whataburger is a cult in the South, and I will cop to owning a Fri-Yay Whataburger shirt, which I wear loud and proud!"

"Because it is a heck of a lot easier to offer merch than train crews or hold them accountable."