What’s next for Small Business Saturday? 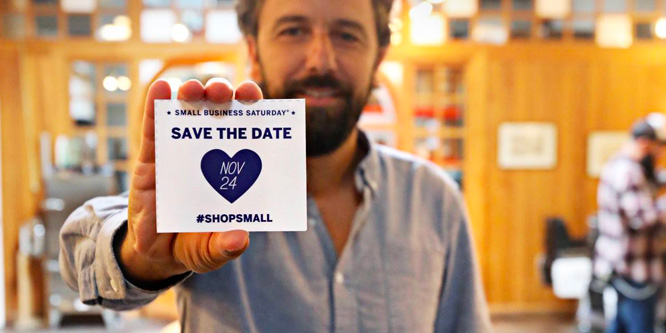 An estimated 104 million U.S. consumers shopped or dined at local, independently-owned businesses on the day, down from 108 million in 2017 and 112 million in 2016, according to the wrap-up survey from American Express and National Federation of Independent Business (NFIB).

John McLaughlin, a spokesman for NFIB, told RetailWire that some leveling off in traffic was expected given that the initiative is in its ninth year and 70 percent of Americans show awareness of the event.

The day may also be facing similar issues that are depressing store traffic on Black Friday including the shift to online buying and the spreading of more deals throughout the holiday selling season.

Other indicators point to a beneficial day for independents:

The increase in average spend may have been helped by efforts by small business owners as 66 percent indicated they were planning promotions, sales or activities following Thanksgiving to support holiday spending.

The day is also being helped by growth in the number of “Neighborhood Champions” or local community organizers that orchestrate holiday pop-up markets, shopping passport programs, sleigh rides and other local initiatives to drive traffic. More organizations are joining the Small Business Saturday Coalition to support similar efforts. This year saw an 18 percent jump in social media posts and more shoutouts from elected officials.

DISCUSSION QUESTIONS: Does Small Business Saturday need a reinvention? Are the traffic declines worrisome or should they be expected at this point? Should organizers and small businesses alter their strategies to shift the marketing focus beyond raising awareness?

Please practice The RetailWire Golden Rule when submitting your comments.
Braintrust
"OK, so we think about our local businesses one day a year and the other 364 we go online or to Walmart and Target."

"There is increasing consumer interest in unique product offerings, which are often best served by smaller enterprises including start ups."

"Skepticism aside, I wonder if the reinvention would resemble a date change."

14 Comments on "What’s next for Small Business Saturday?"

Small Business Saturday is a great idea but, in the end, it’s simply another promotion. It’s competing with every other type of promotion. Constant reinvention needs to happen for the “event” to stay fresh and maintain relevance.

Not sure what 70 percent awareness really means — Small Business Saturday is not something that garners many conversations. Local businesses use it as a reason to have sales and special offers/events and I believe the sales are the primary driver more than shoppers desiring to give small shop owners a break. Many people are still beholden to price and the desire for a deal anywhere they can find it. Spending was up likely because spending is relatively up across the board right now.

As far as reinvention, I would advise small business owners to set their own course and not bet too heavily on this sales day unless they have created sustainable value from it already. Overall, it’s too generic.

I don’t think Small Business Saturday needs a reinvention. KPIs for these types of events or promotional programs have to change. Store traffic will become less important as more commerce is done online. Ultimately, the day saw a really solid increase in overall sales and that is what matters (as long as independents aren’t giving up too much margin on shipping).
Consumer tastes are actually lining up very nicely for this campaign as they are increasingly leaning towards a more authentic, more curated experience that independents can better cater to.

One of the big issues here is the ease and ubiquity of the big players in the market. Small businesses need to leverage their online presences so they can “punch above their weight” and successfully compete. Small Business Saturday has great intentions, however there needs to be a direct, in-your-face challenge to the big guys/gals. This is still about awareness (because the vast majority of shoppers have never even heard about it … check your surveys), and it requires an orchestrated full-frontal attack to show why small businesses are the way to go.

I would say it should be worrisome as I have never heard of “Small Business Saturday.” I’m thinking it’s going to be called “Invisible Saturday” if they don’t get to my generation pretty quickly.

I urge you to stick around and go back to the future. Go back to a time where WE loved your offering, service and value. Look at your consumers as advocates and value their long tails.

The TupperWare model is brilliant — go back to the future.

The only strategic shift needed is realizing who you USED to be and going back to that person/character.

Maybe not so much of a reinvention, since 70 percent of Americans are aware of it. Instead, a possible shifting of the date to an earlier or later Saturday might be in order. With all of the hype on Black Friday and Cyber Monday, consumers are overwhelmed with offers that tend to distract them from seeking out a local business on the Saturday in between. Unfortunately, these bread components of the weekend sandwich tend to obscure the great tasting ingredients of the sandwich offered by Small Business Saturday. Shift the date and all components of the sandwich will belong to local businesses vying for holiday shopping sales.

OK, so we think about our local businesses one day a year and the other 364 we go online or to Walmart and Target. Unless the small (local) businesses offer something that works those other 364 days, this promotion is a event without purpose.

Small Business Saturday may be lumped in with Black Friday and Cyber Monday but the only real connection is that it falls in between the two days. That’s just geography.

The purpose of Small Business Saturday is to celebrate the businesses that are the backbone of our communities. It’s not about BIG SALES and markdowns, it’s about coming together. Some of our indie clients include a special pricing, but most host open houses, food tastings, demos and makeit-and-takeits; things that show customers what their businesses have to offer.

I don’t think Small Business Saturday needs a reinvention; I think it’s finally coming into its own.

Skepticism aside, I wonder if the reinvention would resemble a date change. While there are benefits of capturing consumers already in the throes of the sales frenzy of Black Friday and Cyber Monday, I wonder if it gets a little lost.

I must admit that I saw very little about SBS this year. In past years I have seen credit card ads that promoted it, etc. From what I am reading, boutique shopping is hip when done right and many of the big brands are even jumping into small boutique concepts. This will begin to blur the actual small business with small shops. With that said, setting aside a day for small business shopping is cool and puts a focus on them. It reminds us to think of them during the holidays even though they may not have the big dollars to run pricey ads and promotions. I suggest more partnerships like the credit card ones, location based awareness, and fun in-store happenings on that day. And that’s my 2 cents.

I am always suspicious of surveys like this. The problem and the benefit of small businesses is they don’t share their sales figures with most anyone. That said I can’t imagine why anyone would think small business Saturday is not a success. Yes we could use more adoption but quite simply there is nothing else that drives awareness of small businesses like this tool they can use.

Small Business Saturday for me is a waste of time, as supermarkets in general the Saturday after Thanksgiving are a dead zone, but for me it is a National Holiday as Ohio State gets to beat Michigan again. Online and Mega stores have changed the game, and unless you have something amazingly different to sell, it is going to be tough to move product without a big discount. If someone chooses to promote SBS, then they need to plan a few months ahead with a strong theme and maybe a free gift bag to tie in with your promotion. Consumers love free stuff and if done right, it could still provide positive cash flow before the Christmas rush. Years ago our downtown had amazing success in running one-day events, and it involved all the stores on the street. Today our downtown is mostly abandoned, with a pizza place, a tattoo parlor, and a hairstyle salon and one small restaurant, which is typical of small town America. The good old days are just that, and to… Read more »
1
|
0
-   Share

The event is not likely to have the 70% awareness claimed in the article, but putting that aside, it seems a large percentage of communities support the event in meaningful ways, calling attention to a segment of retail getting increasing attention through Instagram and other digital platforms.

Small businesses are finally utilizing digital in large numbers and getting attention similarly to larger retailer digital efforts. This, plus local Chambers of Commerce and similar business organizations are doing a reasonable job of pushing the event.

This is NOT a zero-sum game of “competing” with the big guys. There is increasing consumer interest in unique product offerings, which are often best served by smaller enterprises including start ups. There is plenty of room for both big and small.

Braintrust
"OK, so we think about our local businesses one day a year and the other 364 we go online or to Walmart and Target."

"There is increasing consumer interest in unique product offerings, which are often best served by smaller enterprises including start ups."

"Skepticism aside, I wonder if the reinvention would resemble a date change."