What’s up with the stalled Amazon Fresh openings? 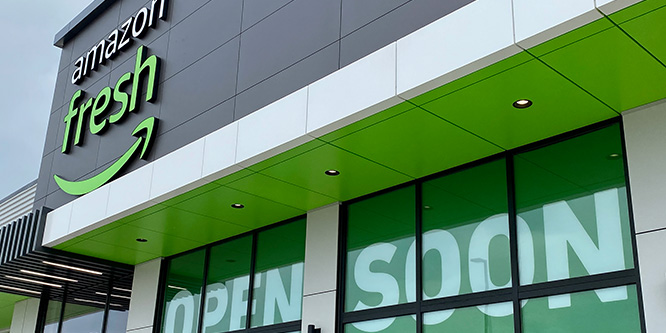 Throughout the U.S., a number of new Amazon Fresh stores have been built out, but are just sitting there, leading some to wonder if Amazon is quietly backing away from the Just Walk Out grocery concept.

Wrote The Information, “For the most part, these Amazon Fresh stores look like they’re ready to open: The lights are on; there are signs for meat, seafood, bread and 15-cent bananas. But the shelves are empty, the doors are locked and no employees are around. Amazon’s pivot from rapid expansion to cost-cutting has left ‘zombie’ grocery stores like these across the country.”

After two years of expansion that resulted in 44 U.S. stores and 19 UK stores, Amazon has refrained from opening any new Fresh stores since September, despite appearing to complete at least seven locations, according to The Real Deal’s analysis of The Information’s findings. The company has another 26 in development, with a recent Detroit Free Press report indicating two are heading to the Detroit region.

Weeks of missed package notices were found at some unopened locations. The Real Deal speculates, “It’s cheaper for the company to keep the stores in place while not operating, rather than ditch the stores altogether. While the company is on the hook for rent, maintenance and taxes, shutting down a store could also force Amazon to pay a fee for a lease withdrawal or severance to hired employees.”

In mid-November, The New York Times reported that Amazon was planning to lay off approximately 10,000 employees, the devices organization, retail division and human resources being the hardest hit departments. A report on December 2 from Computer World indicated the layoffs could balloon to 20,000 as a pandemic-induced hiring spree gets reversed.

In March of this year, Amazon surprised many by moving to shutter its Amazon Books, Amazon 4-star and pop-up locations. At the time, an Amazon spokesman told The New York Times the company will “focus more on our Amazon Fresh, Whole Foods Market, Amazon Go and Amazon Style stores and our Just Walk Out technology.”

One positive: Amazon posted a 10 percent year-over-year increase in net sales at its physical retail stores in the third quarter.

DISCUSSION QUESTIONS: Do you see Amazon Fresh’s stalled openings as a temporary retrenchment or a sign Amazon may be reassessing the concept’s approach? Do you suspect Just Walk Out technology, some other aspect of the concept, macroeconomic pressures or some other factor may be playing a role in the delays?

"Amazon has become the unbeatable warrior of retail, as the name implies. However they seem to be hitting the natural barrier to growth that many firms hit..."

14 Comments on "What’s up with the stalled Amazon Fresh openings?"

Amazon Fresh has serious structural issues. Its staff, picking orders for delivery, impede the aisles for in-person shoppers. Smart carts hold only two bags. The technology turns off older customers. In-stock positions can be weak. I’m not sure it’s ready for prime time.

Spot on. And this pause is a good time for Amazon to review, decide what kind of stores they want to operate. Their leadership principles include Customer Obsession, Invent and Simplify, Insist on the Highest Standards. Time to apply these, and commit to what consumers understand, enjoy, expect about shopping.

Amazon continues to spread itself thin with many projects in motion. They’re not afraid of trying new things, but also not afraid of quickly abandoning them either. Their project churn must be significant, and this will likely fall into one of those categories along with the Amazon Style store. They may end up using these as proof of concept to then license to others.

I believe licensing was the plan all along. The licensing opportunity far outweighs the idea of building stores.

Absolutely. AWS and their retail media revenue streams are the money makers for sure and this is in that same vein.

What they really like to do is spread FUD. The company has enough money that it can afford some failures, but in the meanwhile create epic distractions for the industry. Now bring on the drones.

Two weeks ago, Community Grocers in Kansas City opened with the Just Walk Out technology.

As I noted several times on RetailWire, the real play for Amazon is not to actually operate stores with the technology but to license it. The ROI for a licensing strategy far outweighs the expansion of its own brick-and-mortar stores.

Perhaps Amazon is developing relationships with other retailers to own and operate those “stalled” locations. I would.

Amazon has become the unbeatable warrior of retail, as the name implies. However they seem to be hitting the natural barrier to growth that many firms hit: internal rates of return (IRR) on new investments are decreasing and investment requirements are increasing. Amazon’s investment in physical plants and property, as well as the many zoning regulations, employment laws, and property tax issues is an enormous gamble, jumping into a competitive model that many think is oversaturated. They may be realizing that it is difficult to innovate and disrupt when your business model is starting to look like everyone else’s.

I told you so.

I wonder if the stall has something to do with the massive shrinkage we were discussing not too long ago for brick and mortar retailers. Just Walk Out technology seems to encourage this consumer behavior.

Just Walk Out technology looks to be a success, ready for greater adoption on all kinds of fronts, whether licensed or not. It’s deserving of generous resources at Amazon.

Amazon Fresh is another question. Was it built to operate primarily on revenue and profits as a picker distribution center, with some consumer access? Or were a greater amount of shoppers expected to adopt it like any grocery store in a typical trade area? If the latter, the customer experience needs a re-do. Pickers switch to smaller carts to improve movement in aisles for shoppers, spaces need brightening with better lighting, product merchandising needs a clear strategy, fresh food senses need emphasis, while messaging and signage should tell stories and make promises to address a clear ingredient. Why should a shopper go to Amazon Fresh over other stores?

Should we care? Really, there are tens of thousands of groceries, operated by hundreds — or thousands, including indies — of companies. Even greatly expanded “Fresh” would be but a trivial share.

And who’s to say it will be expanded (?): Amazon’s forte is online; their store presence is really a bunch of “experiments” … PR Value more than anything else.

I’m completely perplexed here. Experimenting and consolidating are natural parts of the business journey, and Amazon follows suit. So, what’s the point of talking about it? Furthermore, Amazon is constantly improving its tech-stack and introducing new mechanisms to ensure a positive customer experience from start to finish. In light of this, I don’t think it’s worthwhile to talk about the lifecycle of Amazon Fresh.

Why should a shopper go to Amazon Fresh over other stores? Because most don’t like waiting in line, and those who don’t know how to navigate through the technology and app quickly and successfully. This kind of store with this kind of new technology needs to improve, and it will. A better audience could have been met if these stores were set up by college and university campuses as students there are more likely to take advantage of this new technology.

"Amazon has become the unbeatable warrior of retail, as the name implies. However they seem to be hitting the natural barrier to growth that many firms hit..."