Who will win the first RetailWire Christmas Commercial Challenge? 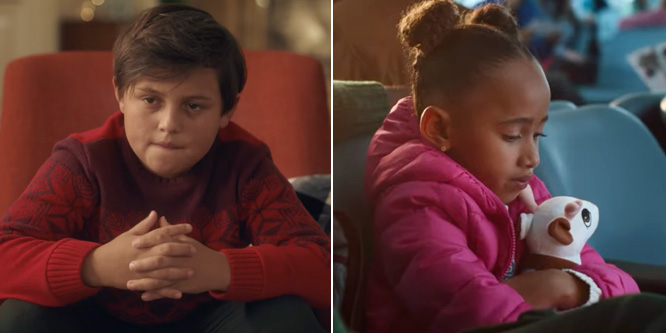 Is it Christmas yet? It seems as though retailers have been running seasonal commercials forever, despite supply chain challenges, rising prices and the prospect of a seasonal rise in COVID-19 cases even before the news of the new Omicron variant broke.

Walmart spent $56 million placing holiday commercials on national television between Oct. 1 and Nov. 28, according to figures provided by iSpot.tv to RetailWire. Amazon.com spent more than $33 million during the same period. Target spent $20.8 million, followed by Macy’s ($17.7 million) and Kohl’s ($13 million), to round out the top five national TV advertisers through Cyber Monday.

It’s not surprising to see so many direct competitors looking to match their ad spending levels to those of their primary rivals. It is with this understanding that we kick off the ninth year of the RetailWire Christmas Commercial Challenge with spots from Macy’s and Kohl’s. Each company is coming off of a positive third quarter report that included upwardly revised annual forecasts projecting strong holiday quarters with fewer discounts to nip away at profit margins.

Macy’s same-store sales during the third quarter increased 8.7 percent, an improvement over the 5.9 percent gain it posted in the second quarter. Earnings per share were well above what it did during the same quarter in 2019 and gross margins improved by around 100 basis points.

Kohl’s third quarter comps were up 14.7 percent with a record third quarter diluted earnings per share of $1.65. The recent addition of Sephora shops inside of Kohl’s stores has boosted sales at those locations in the mid single-digits, according to the retailer.

Macy’s commercial, the first for you to consider, is a story within a story, involving a dad, his daughter and a reindeer named Tiptoe.

Kohl’s ad presents an intergenerational message about family, the spirit of gift giving and the art of dancing.

(Editor’s note: If you would like to nominate entries for this year’s challenge — either domestic or international — please email the name of the retailer and a link to the spot to adchallenge@retailwire.com.)

DISCUSSION QUESTIONS: What is your critique of the Christmas spots from Macy’s and Kohl’s? Which retailer does a better job of connecting with its core customers while reaching out to new shoppers with its Christmas spots?

Please practice The RetailWire Golden Rule when submitting your comments.
Braintrust
"Both spots are good at tapping the emotional elements that create human bonds."

"Kohl’s wins this battle. Macy’s is well done, but the Kohl’s ad sweetly tugs at heartstrings and is the clear victor."

"I give the nod to Macy’s, for building on their seasonal “Believe” message."

15 Comments on "Who will win the first RetailWire Christmas Commercial Challenge?"

Kohl’s is great because it shows people gathering and being together after almost two-years of disruption. However, it is rather generic and could be for any retailer and has no real association with Kohl’s.

Macy’s is very sweet and will appeal to kids and adults alike. I love the broader message it instils and the fact that it is linked to Macy’s “Believe” tagline. Tiptoe was also featured in the Macy’s Thanksgiving Day parade and has her own online microsite, so there’s another great link.

Both adverts are good but, for me, Macy’s has the slight edge — so my vote goes to them!

I’m voting for Kohl’s — positive message nicely executed. Macy’s ad, while a good story, doesn’t have much to do with Macy’s — it could have been anyone. And notice no one’s wearing a mask walking through the airport or getting ready to board. Could have been a bit more sensitive to the travel experience of these times.

Kohls. I love the family message it conveys.

While I thought the Macy’s commercial was cute, (but why wasn’t anybody wearing masks?) it didn’t tell me anything other than someone telling a story.

Kohl’s wins this battle. Macy’s is well done, but the Kohl’s ad sweetly tugs at heartstrings and is the clear victor.

Both are sweet stories are appropriate for our current situation with themes of hope, family, holiday spirit, but Macy’s does a better job integrating Tiptoe and Believe into their overall marketing campaign (though I wish there were masks at the airport…).

Kohl’s. I like the way Macy’s included “Believe” in the message but overall, Macy’s didn’t resonate the way Kohl’s did. A family gathering and conveying that sense of family across the generations is at the heart of the holiday spirit. The real gift is the reminder of how family grounds us.

Both spots are good at tapping the emotional elements that create human bonds. Macy’s weaves storytelling and fairytales into an immediately relevant situation that emphasizes their historic “Believe” campaign. The family gathering in Kohl’s is superbly done as it bridges generations and celebrates relationships.

Macy’s is on brand and message; Kohl’s spot is thoroughly feel-good without any seeming connection to the brand value proposition. From a consumer perspective, Kohl’s wins; from a branding perspective, Macy’s is superior.

Macy’s message of taking risks with love and faith will resonate with mothers who have a front-row seat as their young children develop.

Kohl’s spot was stronger. This understated ad is so simple and so powerful in showing how love and connection don’t have to cost a thing. Kohl’s spot will resonate with adults 30 and up, as we cherish our holiday memories with our children and parents together. (Especially after lockdowns kept these generations apart last year.)

Yes, the Kohl’s ad captures the particular moment we are living in. These grandparents and grandkids may not have seen each other for two years, so there is no need to pound the “buy your gifts at Kohl’s” message in this spot.

Macy’s builds on its Christmas tag line of “Believe,” which you see on their New York City store, frequently during the Thanksgiving Parade. It is a good animated presentation supporting the Santa Claus story.

Kohl’s shows Christmas morning as keeping the giving sprit, not just getting presents. While Kohl’s has a great message and executions, there is really no connection to the retailer. I give the nod to Macy’s, for building on their seasonal “Believe” message.

Kohl’s wins this round because it captures the moment when families are reuniting (COVID-19 variants notwithstanding) and touches on actual gift-giving in a very understated way.

The Macy’s ad echoed the story of Rudolph the Red-Nosed Reindeer (actually the creation of an ad copywriter at Montgomery Ward) and had a nice wrapup … but as others have pointed out, where are the masks? It seems like a particularly noticeable (and tone-deaf) lapse in 2021.

Macy’s. It has much stronger recall — I can remember seeing this ad especially given that it hearkens the Claymation Rudolph movie, whereas the lack of well, anything memorable/differentiating in the Kohl’s ad doesn’t spur anything for me.

Also, much less concerned about people not wearing masks at the airport. While perhaps that is more sensitive, consumers have consistently stated they don’t need the constant reminder of COVID — on commercials, TV shows, etc. At this point, people have made up their mind on their stance on masks.

I’m the world’s biggest Rudolph flying reindeer fan — in the top three, anyway — so no doubt about it: Macy’s. (It wasn’t meant to be either a zoology or geography lesson so I’ll forgive the penguin.)

While they are both heartwarming stories, I give the nod to Macy’s as they make a good connection to their traditional holiday theme of “Believe.” That established more of a brand connection than the Kohl’s message.

Both ads are well done and hit an emotional chord. Kohl’s completes the loop with the tagline at the end, “give with all your heart.” That gives purpose to the ad, serving as a reminder that the season is about giving, not getting. That makes it a winner to me.

Braintrust
"Both spots are good at tapping the emotional elements that create human bonds."

"Kohl’s wins this battle. Macy’s is well done, but the Kohl’s ad sweetly tugs at heartstrings and is the clear victor."

"I give the nod to Macy’s, for building on their seasonal “Believe” message."